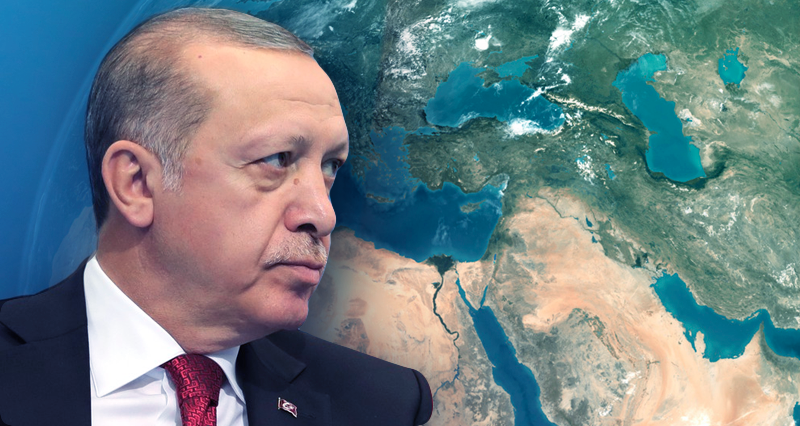 Turkish delegations that make more frequent visits to Arab countries, intense exchange of diplomatic messages between Ankara and Tel Aviv, the hosting of representatives of the United Arab Emirates in Ankara, increasingly positive statements towards the region – all these steps suggest a new beginning in Turkish policies towards the Middle East.

In order to better understand the possible contents and the objectives of this new process, we first need to take a brief look at the overall Turkish position in both domestic and the international politics.

The Justice and Development Party (AKP) has accelerated its shift towards the Eurasian axis after the US-backed coup attempt back in July 15th, 2016. While within this process, some serious and long term steps were taken towards Russia, Iran and China, an evasive policy was followed against the Western camp.

However, with the election of Joe Biden into office in January 2021, the tendency to restore the relations with the United States and to cooperate again as a “NATO ally” has risen again within some groups in the Turkish government.

Every day, government officials are calling on Washington to “deepen its cooperation with Turkey” in many different areas, especially in Syria and Afghanistan. Most recently, details of the proposal from Ankara to Washington for the security and management of Kabul International Airport resonated in the Turkish media.

And currently, there is a struggle between two different approaches within the AKP concerning the question on how to solve this crisis:

One approach advocates overcoming this crisis by national, Turkey-centered methods and by cooperating with Eurasian powers. The other approach proposes to return to the Atlantic axis.

The new orientation towards the Middle East

The Turkish government meanwhile has just initiated a new political “opening-up” for the Middle East diplomacy, choosing a delicate timing.

The AKP’s Middle East opening-up can be summarized with the following basic steps:

In May, Ankara has begun formal and open-to-public talks with the Al-Sisi government, for the first time since the overthrow of the Muslim Brotherhood in Egypt back in 2013. Recently, Turkish and Egyptian diplomats met in Ankara and delivered messages of the beginning of a new process these two countries.

Likewise, President Recep Tayyip Erdogan personally welcomed officials from the United Arab Emirates. The relations between Turkey and the UAE had been also disrupted. Now, both sides have announced the restoration of the economic co-operation.

And is it seems that the ongoing disputes with the Saudi Arabia are being settled gradually too, with Ankara following a low-tension approach in the case of Jamal Khashoggi, who had been killed at the Saudi Consulate in Istanbul.

In parallel with the diplomatic steps from Turkey, we also see that Qatar is entering a normalization process with other Gulf countries and with Egypt.

Therefore, it is not wrong to state that Ankara and Doha have agreed to pursue an opening-process, which they coordinated on the Gulf countries and on Egypt together. Tehran’s views concerning this opening-up process jointly conducted by Ankara and Doha, remains to be seen.

Although the Turkish government continues to give statements on a high tone regarding the rights of the Palestinian Authority and its people, a trend towards normalizing the relations with Israel is also gaining strength.

The phone call traffic between President Erdogan and his Israeli counterpart Isaac Herzog since July, and the mutual positive statements given from the officials of both countries indicate the beginning of a new process between Ankara and Tel Aviv.

It is also known that the Turkish Embassy in Tel Aviv is very actively working on improving the relations.

The Astana process has shown the AKP’s shift to an approach that was more cooperative with regional powers such as Iran and Russia concerning the situation in Syria.

This previous orientation had also positively affected the relations between Ankara and Damascus, which had moved on in a negative way, and the tensions reached a low profile.

But the Turkish Foreign Minister Mevlut Cavusoglu’s statements after meeting with the representative of the National Coalition for Syrian Revolutionary and Opposition Forces, suggest that Ankara is again moving away from the weak-but-existing tendency to improve relations with Damascus.

When Cavusoglu’s statements are evaluated together with the anti-Assad rhetoric of political figures close to President Erdogan, such as Fahrettin Altun or Ibrahim Kalin, we can conclude that the Turkish policies on Syria have a tendency to roughen back again.

However, the same AKP somehow refrained to give a similar support for the Tunisian Ikhwan, the Ennahda movement, which has been dismissed from the government after a process similar to that one in Egypt.

In the early days of dismissal of the Ennahda government, officials from the AKP have right away given some strong statements against the new Tunisian government. Then they have gradually softened their hard tone in their statements, and in the end, they have announced that they could fully cooperate with the new government in Tunisia.

The conclusion from this new orientation

In order to list the conclusions that follow from the AKP’s new orientation in the Middle East:

1. As it was shown in its relations with the Egyptian, Tunisian and the Gulf administrations, the AKP is on a way to soften its pro-Muslim Brotherhood policies, which it had maintained since coming to power in 2002, at least concerning North Africa.

2. Steps to normalize the relations with Israel may indirectly be perceived as a welcoming message to the Biden administration.

3. This return towards the Western axis in Syria could negatively affect the diplomatic relations between Turkey-Russia and Iran in the times ahead.

4. Although we still do not claim that AKP government’s course has completely turned towards the Atlantic in its overall policies of balance of power between the Atlantic and Eurasia, it seems likely that they will move on with the policies that are closer to the Atlantic camp for some time.

And the question, whether the AKP’s opening-up in the Middle East takes place independently from the Atlantic camp, will be answered with the balance they will strike with Moscow and Tehran in the near future.

There is a group within the AKP, which pursues a return to pro-Atlantic policies as an answer to the worsening economic situation. Asian and Eurasian powers may prevent this group’s strengthening with economic support and initiatives in favor of Turkey.