“Biden must disband AFRICOM and withdraw” 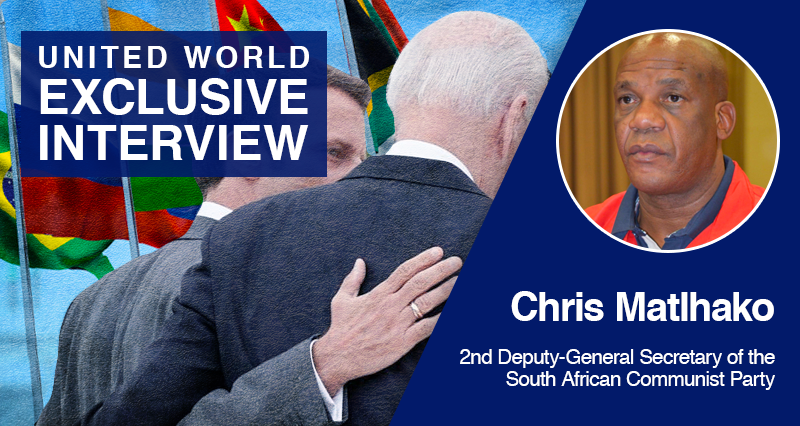 Africa is witnessing several coup d’etats, the rising threat of terror and the decline of US and French imperialism on the one side, rising economic and political activities of new powers such as China, Russia and Turkey on the other.

We interviewed Chris Matlhako, 2nd Deputy Secretary General of the South African Communist Party, governing the country in the Tripartite Alliance together with the African National Congress (ANC) and the Congress of South African Trade Unions, on the coups, national liberation movements, imperialist interventions and the role the BRICS can play in the continent.

Africa has witnessed several coup d’états in recent times, such as those in Mali and Guinea. What is your party’s and South Africa’s evaluation of these coups? Do they constitute a French-American reaction to African countries’ attempt to pursue a more independent foreign policy?

Indeed, almost 7 decades after de-colonization of the continent, we continue to experience these kinds of things. They have not only set the project of national liberation backward but also led to further entrenchment of under-development and set in motion a process of consolidation a neo-colonial agenda supported by elements of the military and emerging comprador elites with active backing of the former colonial powers. Since we have not successfully transformed our societies and the colonial relations that characterized colony-metropole back then, these trends have reproduced, and prevail in Africa today.

The African Union (AU), unlike its predecessor the Organization of African Unity (OAU), has not been effective in protecting and defending the interests of the people of the continent. For example, the recent decision by the AU chairperson to allow Zionist Israel observer status at the AU without a discussion by member countries of the AU is indeed a huge affront to the struggles of our founding fathers and the struggle for national liberation and anti-racism.

These military coups are not the answer to the challenges that confront the continent for a host of reasons. First, most of the militaries on the continent are extensions and/or appendages of the military ethos of the West. They are trained and funded by former colonial and imperialist elements that continue to seek a presence on the continent through various ways. This is in pursuit of the economic objectives and goals of Western multinational corporations seeking to exploit the rich mineral wealth of the continent.

Factually, France continues to seek to dominate West Africa (and other parts) and therein you will witness all sorts of French manipulations and maneuvers. This is also necessitated by the perceived inroads the People’s Republic of China is making on the continent, which is threatening the West and North America. Western and North American instigated coups will continue until the people of the continent take a proactive and unambiguous anti-imperialist position and determine their sovereignty in the context of their development trajectory.

“A new civic-military nexus on behalf and interest of the people, similar to Latin America is needed”

A unique relationship should be cultivated similar to the one in Latin America between the militaries and the broad majority of the people of the countries of the continent still under yoke of neo-colonialism, a civic-military nexus that would act on behalf and interest of the majority of the people and in pursuit of the deferred goals of national liberation.

Does, in your opinion, the Biden Administration have a specific policy and strategy in Africa? What is its content?

Biden must withdraw and disband AFRICOM and accept the sovereignty of the nations of the continent. Balanced trade and other relations must be allowed to flourish between countries of the continent and the rest of the world and the people of the continent must be allowed to democratically – without the influence of the West engage their challenges and decide on their trajectory and political project. The West and North America must be just another international partner that the continent can engage without being coerced through illegal and unilateral sanctions and so-called war on terror.

We should also discuss Françafrique. Is this project, in your opinion, independent from US strategies on the continent, and does it have any chance to be realized in the future?

For the entire period of its presence on the continent, France has not only sought to extract lucrative resources to drive its own economy and development but dominate the continent. French military presence has stoked fires of rebellion and propelled coups in numerous regions. It has also instigated artificial fissures between and amongst other continental powers.

All of this is ultimately directed at undercutting the People’s Republic of China, who, through the Belt and Road Initiative (BRI), has produced tangible development results that have a potential of bettering the quality of life of the people of the continent. The basis of the BRI acknowledges key important accepts of mutuality and reciprocal benefits – absent in the trade agreement between Western Europe and North America. After cultivating ISIS and the Taliban, the US and France are now scuppering around to contain the insurgents brutal campaign in oil-rich north Mozambique, where US and French oil companies are seeking to rake it in.

The example of the coup in Guinea has once again shown that the Françafrique project collides with activities of China, Russia and Turkey in Africa. How do you evaluate the rising economic and political activities of these three countries in Africa? In your opinion, do they follow a policy on the continent different from French Colonialism?

It is our concerted view that the continent has the capacity to decide on its trajectory independently from the influence of the West and North American proponents of so-called democracy. The continent should explore its own best interest and relations with partners across the world – Turkey, PR China and others on their terms, which are in the best interest of advancing the goals of national liberation. These relationships must not be subject to the dictates of so-called advice from the high priests of democracy – the West and North America.

Do you think that the US and France can push back or eliminate Chinese, Russian and Turkish economic investments in African countries?

How do you evaluate the position of the African Union and the ECOWAS in these coup attempts? Can and should the BRICS, as an organization defending multilateralism, play a bigger role in Africa?

The ECOWAS (Economic Community of West African States) and the AU generally have ambivalent positions concerning the coups in the region and the continent. This position is not helping the continent and its people to throw off the yoke of imperialism. At the heart of the coups are the goals of imperialism to create a pliant comprador states that will advance their goals on their behalf.

The peoples of these regions, and indeed the entire continent, must oppose these measures – both the coups and military strongmen, but at the same time seek to develop a different nexus of civil-military relations that advance the goals of independence. That the dictators on the continent have always remained alive has been a result of the support of the West and North America, which protected their economic-political interests. This chain must be broken and foot soldiers of the people must emerge to take forward the ideas of independence and national liberation.

In this context, bodies such a BRICS could play a critical role in furthering multilateralism and different avenues for sourcing funding for developmental goals. Together with China and other countries providing mutually beneficial funding, BRICS could help resolve the debt of various African countries to the World Bank and the IMF.

Among other steps, solidarity and a continent-wide campaign to write off debt could be the answer. All of this has been further crystalized in the context of the Covid pandemic.

Founded in 1921, the South African Communist Party (SACP) is part of the government in South Africa within the so-called Tripartite Alliance together with the ANC and the Congress of South African Trade Unions since the end of the Apartheid regime. The party has held various ministerial positions, including ministries of Trade and Industry and Higher Education.

Several presidents of South Africa after the end of the Apartheid regime were former members of the SACP, such as Nelson Mandela and Thabo Mbeki.