The coup d’état against Erdoğan’s brother 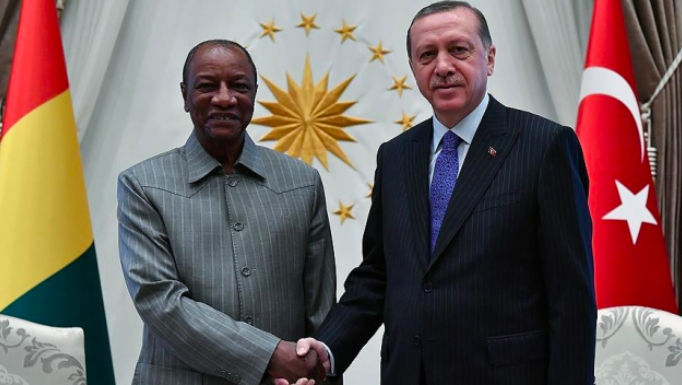 Soner Yalçın is a widely followed Turkish columnist who writes in the daily newspaper Sözcü. On September 7th, he dedicated his column to the coup in Guinea, examining Turkey’s connection with that country.

Below, United World International presents the article of Yalçın in English translation.

Not even a month has passed since then, since the 14th of August…

He met with Erdoğan at the Vahdettin Pavilion in Istanbul. Not a single explanation was given after this meeting.

After that he visited the Yeni Safak newspaper, where he met with Ahmet and Nuri Albayrak, the chairman and the deputy of the board of the Albayrak group, as well as with Huseyin Likoglu, the editor-in-chief of the newspaper. The Albayrak Group already had an investment worth 200 million dollars in that county.

I am talking about the President of Guinea, Alpha Condé. He spoke to channel ‘TV Net’, owned by Albayrak Group:

Stating that Erdoğan has made a great contribution to the economic development of Guinea, Condé added:  “I plan to develop the economy of Guinea and turn it into the second largest economy in Africa after Nigeria. And first of all, Erdoğan is my brother, that’s how I see him. There are huge businesses to make in Guinea. And Erdoğan mediated in the Albayrak Group’s investment in Guinea. The Albayrak Group has done some amazing work in Guinea. For the path ahead, we again ask for Erdoğan’s support.”

Hold on before you say, “So where did this Guinea come from right now?” I will explain it all:

Erdoğan and Condé really seem like brothers to each other.

Condé came to power back in 2010. Erdoğan and Condé opened embassies in respective countries three years later in 2013.

Erdoğan personally visited the country the first time as president on March 3rd 2016.

Condé returned the in Istanbul on April 14-15, 2016, when he attended the Summit of the Organization of Islamic Cooperation. He had a personal meeting with Erdoğan then.

Condé visited Turkey between again on December 26-30, 2016; He met with Erdoğan.

Condé attended the Turkish-African Agriculture Ministers’ Meeting April 27-28, 2017, as the Chairperson of the African Union. Again, he held a personal meeting with Erdoğan.

Condé visited during the D-8 Summit held in Istanbul on October 20th 2017, and during the Extraordinary Session of the Organization of Islamic Cooperation held on December 13th 2017, and met with Erdoğan.

In summary: Condé visited Turkey at least twice every year, since then. He even came to the opening ceremony of the Camlica Mosque.

And this does not end with just trade relations; Turkish institutions such as TIKA (Turkish Cooperation and Coordination Agency) and the Maarif Foundation also operate in Guinea. Turkish Airlines have direct flights to this country…

And the thing I am wondering is this.

Condé was overthrown by a military coup on September 5th 2021.

We would have expected a statement of “support to Condé” from Erdoğan, just like he did to Morsi wouldn’t we? Yet, he has not done that, and I wonder why? Could it be because he has learned his lesson from the diplomatic tensions caused by his extreme siding with Morsi? Or is there another reason?

Born on March 4th 1938, in the city of Boke in the west of Guinea, Condé studied at the Sorbonne University in Paris. He was elected director of the Federation of Black African Students in France (FEANF) in 1963, which defended the independence of the African countries colonized by the Western Powers.

Working for a French sugar company for a time, Condé founded the consulting firm “Africonsult” in 1985 and managed the company until 2001. He ran for the presidential office in elections of 1993 and 1998. After several years of political battle, where he was arrested and detained several times, he was finally elected president in 2010.

The constitutional amendment he made in order to be elected in a third term, has sparked some huge controversies. I am going to cut it short here:

– Condé, who promised to be the “Mandela of Guinea”…

– Condé, who said “We must review our colonial relations with France”…

– Condé, who defended the idea of “independent Africa”…

– Condé, who was called “Professor” or “Koro Alpha”, which means “Brother” in Fulani language, was overthrown. By whom?

Who is this Colonel Mamady Doumbouya, the main organizer of the coup?

He was born in 1980. He served in the French Foreign Legion.

He was educated at the French Military Academy and the Israeli Academy of International Security.

He participated in military operations in many countries such as Afghanistan, Ivory Coast and the Central African Republic.

He was called back to Guinea by Condé in 2018, and was appointed to command the Special Forces Group (GFS).

What are those coincidences? Doumbouya was also a very close friend to Assimi Goïta, who organized the coup in Mali last year (who was also trained in the United States, France and Germany, and served in the US Special Forces/the Green Berets)! Goïta also overthrew Ibrahim Boubacar Keïta, who was democratically elected into the office back in 2013.

There is a fierce allocations battle going on in Africa. And we are still discussing about that 30 million dollars of financial aid we gave to Somalia!