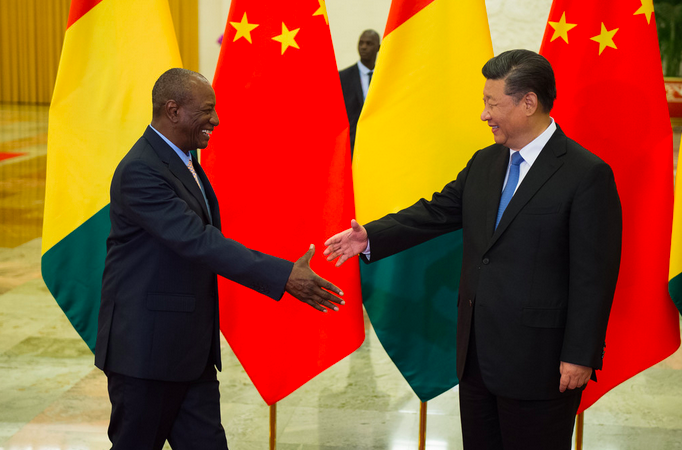 Pro-France Special Forces have staged a coup in Guinea and took President Alpha Condé, a politician friendly towards Turkey and China, as hostage. In the recent years, Condé had been developing relations with Asian countries, while he was targeted by protest actions of ‘civil disobedience’, supported by the West.

After gunshots were heard near the Presidential Palace, it was announced that a coup d’état was taking place in the West African country.

Unconfirmed footage was distributed, which showed the Guinean President Condé being taken in custody by a group of soldiers. The UN Secretary General Antonio Guterres and the African Union have condemned the coup attempt and demanded the immediate release of Condé.

The Atlanticists support the coup

On one side of the conflict is the political front labeled as ‘No to a third presidential term’. This front is pro-Atlantic and has welcomed the coup. The front is led Cellou Dalein Diallo, who is the opposition’s main candidate and Deputy Chairman of the Liberal International.

Spokespersons of the ‘No to Condé’s third presidential term’ and ‘Collective of Change in Guinea’ movements have officially applauded the coup. Osman Sonko, who leads the pro-French opposition in Senegal, was also among those who welcomed the coup.

Advancing relations with Turkey and China

On the other side of the conflict is the President Condé, who has been targeted by the coup. Condé had signed an agreement on “strategic partnership” with China in 2016, leading to several infrastructure projects that have already started. Since 2016, Guinea achieves an annual GDP growth of 6%. Lastly, Turkey’s President Erdoğan hosted Condé on August 15. Both countries have already been pursuing works on port and infrastructure projects, and they were preparing new joint investments in mining and industry.

Breaking away from France, Guinea headed to cooperation with Asia

The states of “French Africa” have been developing above all economic relations and cooperation with China, Turkey and Russia since 2013. The geography, which since the 1960s until 2010 was characterized by coups, has especially since 2013 achieved stability and development. The Chinese ‘Belt and Road’ provides a positive ground for stability in the region.

When those political leaders, who were termed as Pro-French in the beginning of the 2010s and treated as valuable allies, decided to look for cooperation with China, the Western press started to label them as ‘dictators’.

Second Wars of Liberation in Africa

The ‘national fronts’, which had been founded in French Africa between 1944 and 1960 in the context of war against colonialism, are being reestablished today under the title of ‘Broadened Presidential Alliances’. Africa’s center-right and center-left forces are uniting in this process of the ‘Second War of Liberation’, as the Ivory Coast with its ‘Compromise on National Front’ has demonstrated recently.

The Commander of the coup received military education in Israel, France and Britain

Colonel Mamady Doumbouya, who has led the coup, has an interesting past, indicating prett clearly which centers are supporting the take-over.

Married to a French citizen, Doumbouya is a graduate of military school. He is a commander with more than 15 years of military experience, who has received military education in Israel, France and Britain.

Doumbouya, who is reported to have French citizenship, has received in Israel education in operational protection services.

On duty during the occupation of Afghanistan

The commander who has led the coup also served France in countries like Ivory Coast, Gabon and Afghanistan. After serving in the French army’s ‘foreign legion’ for several years, Colonel Doumbouya was asked lead the newly established elite Special Forces Group (GFS) in 2018.

The West worried on closer relationship between Guinea and China

The Atlantic Front led by the US and France had already declared war on the Guinean-Chinese cooperation. After the Ivory Coast and Nigeria, this camp also had started provocations in Guinea making use of the results of the presidential elections.

The presidential elections were held on October 18, 2020. Alpha Condé has won these elections, his third success, with 59.49% of the votes, while the Pro-Western candidate Cellou Dalein Diallo received only 33.5%. Diallo has not recognized the elections results and called his supporters “to take to the streets”. More than 10 people lost their lives in the following clashes.

Diallo had also taken part in the 2010 and 2015 elections, but without contesting the results.

Political observers explained “the change of behavior” on Diallo’s side “especially with his intent to block Guinean-Chinese joint investments after 2015.” Experts reminded that Diallo declared himself president, even when the votes were still being counted and no result was declared, pointing out that his aim was “nothing more than creating chaos”.

In 2017, the Republic of Guinea had announced the completion an agreement with the People’s Republic of China over a development program of 20 years and an investment of 20 billion dollars. According to this development program, China will provide the infrastructure that Guinea needs, while Chinese companies and Guinean state enterprises will exploit the country’s mines jointly.

Guinea, which has a national income of 10 billion dollars and a population of 12.5 million, whose 85% is Muslim, has received the agreement with great enthusiasm.

Guinea is world’s number one producer of bauxite mining, which is the raw material for aluminum. One third of global reserves of bauxite are located in Guinea. The country’s mineral reserves also include high grade iron ore, gold and diamonds.

China’s entrance to Guinea coincided with the period when Western companies started “giving up”.

When the Australian-American Rio Tinto announced in 2016, that it would not make any further investments, the big Chinese aluminium company Chinalco bought all shares of the said company.

The Chinese government, which deems great importance to fighting poverty, has prioritized in development program the supply of electricity and drinking water. It has constructed in Guinea, which is considered West Africa’s ‘water castle’, the hydroelectric power plants of Kaleta, Suapiti and Amarya. These investments provided electricity and drinking water to various regions, including parts of the capital city of Conakry. Guinea moreover even became an exporter of electricity.

Thanks to the Chinese investment, Guinea is achieving an averaged annual growth of 6.6% since 2015. China and India are the country’s most important trade partners.

The IMF and World Bank’s protégé in Guinea

The praxis of the ‘United States of Africa’

Guinea had achieved its independence from France in 1958 as the first Sub-Saharan country. The country’s founding leader, Ahmed Sékou Touré has governed Guinea with a socialist program, being targeted by coup attempts and an embargo of France.

In the beginning of the 1960s, Guinea joined ranks with Ghana and Mali to declare the founding of the ‘United States of Africa’, but was left alone after coups that took place in Mali and Ghana. Touré was in 1960 the first African leader to visit China.

Since the 1980s, policies of the IMF were enacted in the country, where 80% of the youth is unemployed and 55% is living below the poverty line.

Guinea has established diplomatic relations with Israel in 2016, a step that was criticized by Muslim countries. Being reelected, Condé had first taken a negative position against the Mali Revolution, just as the other members of the ECOWAS, but changed his policy on September 15 to become one of the first to support Mali.