The background of the upcoming meeting between Turkey and Egypt 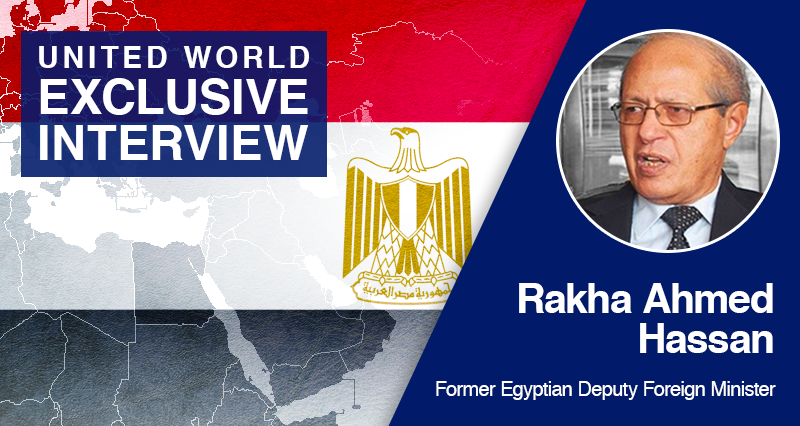 A delegation from the Egyptian Foreign Ministry will visit Ankara between September 7 and 8 to hold exploratory talks. United World International interviewed the former Deputy Foreign Minister of Egypt, Rakha Ahmed Hassan on the visit’s content.

The relations between Ankara and Cairo have been at odds since the overthrow of the Muslim Brotherhood government in 2013. Since then, these two countries have taken opposite stances in many areas, mainly in the Eastern Mediterranean.

A Turkish foreign ministerial delegation’s visit to Cairo in May this year has brought up the question whether Turkish-Egyptian relations are headed towards opening a new page.

After the Ankara-Cairo relations stagnated since the visit in May, the diplomatic circles began to resuscitate again after the announcement that a delegation from the Egyptian Foreign Ministry will conduct a diplomatic visit Ankara between September 7 and 8.

It was announced that a delegation from the Egyptian Foreign Ministry would conduct a diplomatic visit to Ankara on September 7 and 8. What is the main purpose of this visit?

The visit is expected to take place on September 8th. The Turkish side will be expected to express their opinions about the requirements brough up by the Egyptian side during the previous meeting in May. So the progress depends only on the Turkish government’s behavior, and I mean actual behavior rather than hollow statements. And it will also be an indicator for how much does the Turkish government really want the reconciliation between Cairo and Ankara.

Do you think that the visit only takes place because of an invitation from the Turkish side in Baghdad, or do we see a change in policies?

No, the situation was completely stagnating. But now we hope that Turkish side has changed its policies, now with the recent invitation. But we cannot assume beforehand, so we have to wait and see the outcome of the meeting itself.

And what is the priority of Egypt in this meeting? Which topics will Egypt open to discussion in the meeting?

As I told you before, Turkey has to stop intervening in the internal affairs of Egypt and that will be the main priority. And the other point will be the to request them to stop hosting and encouraging the leaders of the Muslim Brotherhood, to stop making critical comments at the highest level of the state on every single event in Egypt, and also to come to an understanding in the Libyan crisis or stopping intervening in Arab internal affairs. But the first two topics are the very first priorities for the Egyptian side. Some of the leaders of Muslim Brotherhood hosted in Turkey have been sentenced in Egypt, and Cairo demands their extradition.

So if the two side could come to an agreement, what will be the main areas of cooperation between Turkey and Egypt?

Mostly on the political area, since the economic cooperation is still ongoing, albeit on a much lower growth rate due to the political situation. In case of an agreement, or a positive change on the Turkish side, of course it will not happen overnight but rather gradually, it would be an incentive for the trade and tourism especially when the COVID-19 pandemic is eased off, and a motivation for the regional problems in Iran, Syria and especially Libya since it lies on the border with Egypt.

President Erdogan had a phone call with the Crown Prince of the UAE, how do you evaluate this channel of dialogue, especially when Egypt and Qatar are also trying to reconciliate their broken ties in the meanwhile?

We have already been developing relations with Qatar since the Arab countries summit in Saudi Arabia. And lately in the Baghdad summit, a meeting between President Al-Sisi and Emir Sheikh Tamim took place. So, our relations are getting back on track. And when it comes to the relations between Turkey and the UAE, the regional tensions seem to ease. This is apparent especially when we see the Nuclear Deal with Iran being reestablished with the Biden administration of the United States. So, if the relations between Iran and the United States come back in place, this will solve many issues in the region. If the relations between Tehran and Washington ease up, it will relax the Gulf region and, to some extent, the tensions between Syria and South Lebanon.  And the Summit in Baghdad including all the neighboring countries except Syria, still mean that Turkey, Iran, Egypt, Qatar, the UAE and Saudi Arabia can still sit at the same table. And there are of course no differences that cannot be solved with some mutual good intentions.

So do you believe that there are regional initiatives that are being put up to solve the regional problems, without any external internal involvements?

Yes, of course there are many initiatives. And I think Qatar is also playing a large role in this aspect, between the parties including Turkey, Egypt. Iraq can also be considered as a good mediator, especially between Iran and Saudi Arabia. The economic and commercial relations between the UAE and Iran are actually quite positive. We can also say the Iranian relations with Kuwait, Oman and Qatar of course is quite positive, but the relations with Bahrain and Saudi Arabia still needs to be developed. And one of the largest factors behind the tensions between Iran and Saudi Arabia/Bahrain, is the strong opposition towards the renewal of the Nuclear Deal with Iran, in the US Congress, and the strong debates between the Republicans and the Democrats. These debates cause stagnation in rapprochement processes. And there is also a strong Israeli lobby in the United States. The last visit by the Israeli Prime Minister was almost completely concentrated on the topic of Iran. However, if the President Biden succeed in making a new Nuclear Deal, there will be many changes in the region.