Victory Day celebrated across the nation; Second meeting in exploratory talks with Egypt; Phone contact between the Turkish President and the Emirati Crown Prince 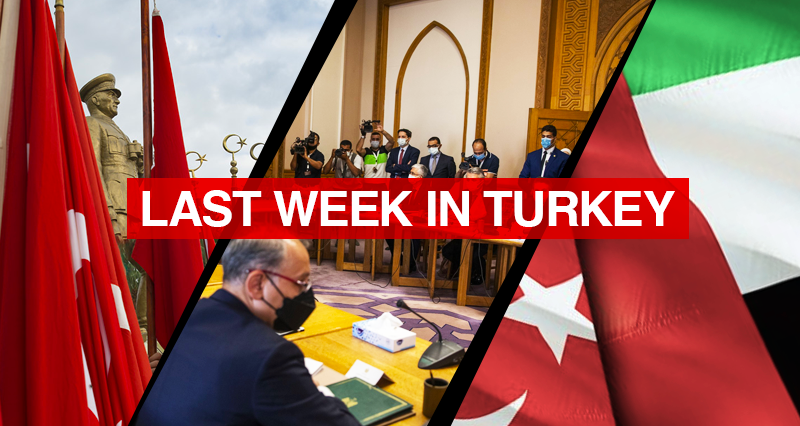 The first topic were the 30th of August Victory Day celebrations throughout the country and celebration messages by leaders.

The second was the announcement of the continuation of exploratory talks between the Egyptian delegation, headed by the deputy Foreign Minister, and their Turkish counterparts.

Victory Day celebrated across the nation

Turkish government officials and politicians have marked the country’s Victory Day on Monday, which commemorates the defeat of the invasion forces at the Battle of Dumlupinar in 1922 and the Turkish victory in the War of Independence.

President Recep Tayyip Erdogan, along with senior government and high-ranking military officials as well as opposition leaders laid a wreath at Anitkabir, the mausoleum of the republic’s founder Mustafa Kemal Ataturk in the capital Ankara.

Erdogan issued a statement to mark the Victory Day: “We are in the bliss of achieving the 99th anniversary of the Great Victory, one of the cornerstones of our centuries-old glorious history. I mark the honor of the August 30 Victory Day of our nation, the Turkish Cypriots, and our citizens living in various countries around the world,”

Noting that August 30th is one of the most critical turning points in the country’s history, Erdogan said: “The spirit, belief, and the will that inspired the Great Victory are drawing the direction for our nation today, just as it did 99 years ago.”

He said Turkey has become the hope of not only its own 84 million citizens but also for hundreds of millions from the Balkans to Asia, from Africa to Europe.

Turkey will continue to defend the rights of the oppressed against the oppressors and to strive for peace, justice, and freedom to prevail all over the world, he added.

The President of the main opposition Republican People’s Party (CHP), Kemal Kilicdaroglu has delivered an official statement for the celebration of the Victory Day.

Kilicdaroglu said “I pay tribute to the great leader Ataturk and his comrades in arms, who regard freedom and independence as characters and are committed to the sovereignty of the nation. Today, it is our duty to crown the Republic, which was founded 98 years ago, with democracy and to develop our country, as well as to be a beacon of hope for all the oppressed peoples. The developments in Syria, Iraq and Afghanistan, and the endless fight between brothers in the Islamic geography, are the clearest evidence of this necessity. I wholeheartedly celebrate the Victory Day of our people on August 30th.”

The leader of the Nationalist Movement Party (MHP), Devlet Bahceli has commemorated the Victory Day with this message: “I commemorate our heroic ancestors on the 99th anniversary of the Battle of Dumlupinar on August 30th, our lost martyrs, and all those who shown courage and patronage during the great national struggle, especially Gazi Mustafa Kemal Ataturk.”

The leader of IYI Party, Meral Aksener has celebrated the Victory Day with a video-message with the following words: “I promise that we will preserve, develop this country, and leave behind a proud legacy of our founding fathers, that we will not disrupt the national unity, that we will pay all respects to all our veterans, martyrs and their families.  I hereby celebrate August 30th together and with such enjoyment.”

The leader of Vatan Party, Dogu Perincek has given a written statement for the celebration of the Victory Day:

“The Turkish Revolution has been fighting against Western imperialism for the last two centuries and has won great victories. The heroes of August 30th are the poor peasants of Anatolia and Thrace who fight with their patched garments and bare feet.

Today, as the Turkish Army and the Turkish nation, we are on the frontlines of the imperialism. We stand tall and our hearts are beating with the pride we had 99 years ago! Because we are the ones who defeated the plans of the United States in the Caucasus and West Asia and we are with our oppressed Asian brothers and sisters.

The Victory of August 30th gave hope and courage to all oppressed nations, from India and Afghanistan to Syria and Algeria, and ignited their inner heroism.

That monster with one tooth called the West, is losing to the oppressed peoples of Asia, Africa and Latin America, whom they despised for a century and whom they has labeled as backwards, while playing a script on modernity.

On August 30th 1922, Mustafa Kemal Pasha’s Turkey was on the front line. Now the Afghan state and nation is at the same front.

How happy that we are the heroes of the Victory of August 30th, which gave hope and courage to the Turkish nation and to the oppressed world 99 years ago!”

The victory at the Battle of Dumlupinar constituted the basis of the foundation of Turkey, the Turkic council’s secretary-general, Baghdad Amreyev, said in a statement.

“With its growing economy, strong democracy, commitment to fundamental human values and visionary foreign policy, Turkey has continued to be a source of inspiration for other nations in its region and beyond,” he added.

Second meeting in exploratory talks between Turkey and Egypt

The ministry said in a statement that Ambassador Hamdi Loza, the country’s deputy foreign minister, will visit Ankara on September 7-8 to hold the second round of exploratory talks with Turkey.

Earlier last month, Egypt’s Foreign Minister Sameh Shoukry said there were contacts at different levels with Turkey to set the “optimal framework for relations and how to resume them.”

The ministry said Loza’s visit came “in response to an invitation by the Turkish Foreign Ministry.”

“The second round of exploratory talks between Egypt and Turkey is expected to address bilateral relations as well as a number of regional issues,” it added.

Earlier this year, Turkey said it had resumed diplomatic contact with Egypt and wanted to improve cooperation after years of tensions that began with the disruption of relations in 2013.

On April 15th, Turkish Foreign Minister Mevlut Cavusoglu announced in a live broadcast that it was agreed that the contact channel first opened between Turkish and Egyptian intelligence would continue through the countries’ foreign ministries.

On May 5th, a Turkish delegation headed by Deputy Foreign Minister Sedat Onal visited Cairo at Egypt’s invitation. At the end of the visit, the two countries issued a joint statement describing the exploratory round of bilateral talks between them as “frank and in-depth.”

Both Cairo and Ankara have shown positive signs in recent months, including statements by Turkish Foreign Minister Mevlut Cavusoglu on the possibility of the two countries negotiating to demarcate their maritime borders in the Eastern Mediterranean.

This was followed by praise from Egypt’s Information Minister Osama Heikal on the recent decisions and direction of the Turkish government on its relations with Cairo, describing them as a “good gesture.”

Turkish President Recep Tayyip Erdogan had announced the start of a new phase in relations with Egypt on May 7th, stressing that the talks would continue, develop and expand.

He said the contact between the two leaders was meant to open “a new phase” in relations as “the UAE seeks to build bridges, maximize commonalities and work together with friends and brothers to ensure future decades of regional stability and prosperity for all peoples and countries of the region.”

During their contact, Erdogan and bin Zayed discussed bilateral relations and regional developments, according to Turkey’s Communications Directorate.

“Relations between the countries and regional issues were discussed in the talks,” a brief statement from the Turkish Presidency said without giving further details.

In a televised interview on the same day, Erdogan said the two countries had been in contact for several months at the intelligence level that helped reach the current level.

He said the UAE will soon make “serious investments” in Turkey, noting that both countries have made progress in improving their bilateral relations in recent months.

“For several months … beginning with our intelligence unit, by holding some talks with the administration of Abu Dhabi, we have arrived at a certain point,” Erdogan also noted.

The two countries, which backed rival sides in the conflict in Libya, have been bitter rivals for regional influence.

In June, a report said that UAE seeks to restore ties with Turkey and other regional countries.

Turkey has in recent months relaxed its tensions with a number of Arab states, such as Saudi Arabia and Egypt.

Erdogan had reiterated that Turkey hopes to maximize its cooperation with Egypt and Gulf nations “on a win-win basis,” at a time when Ankara intensified diplomacy to mend its fraught ties with Cairo and some Gulf Arab nations after years of tensions.

Already-strained relations with Saudi Arabia collapsed after the killing by Saudi agents of journalist Jamal Khashoggi in the Saudi consulate in Istanbul.

As part of their push to rebuild fractured relations, the two countries held talks in May over their differences on the conflicts in Libya and Syria and the security situation in the Eastern Mediterranean.