“Turkey, Russia and China can jointly develop a solution for Afghanistan” 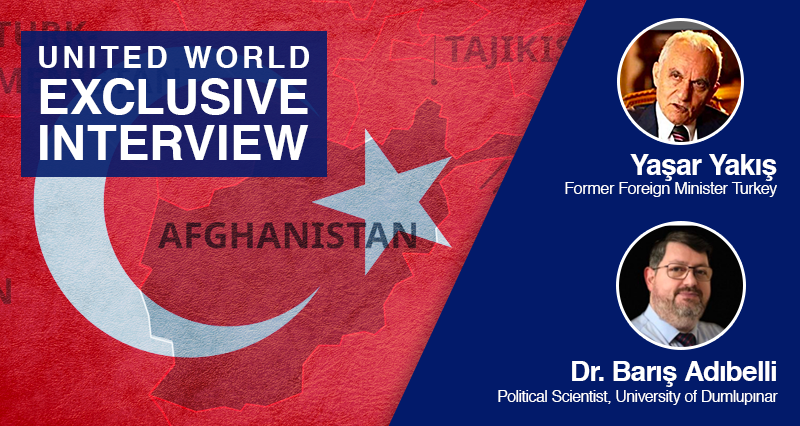 While the 20-year occupation of Afghanistan is coming to an end, Taliban, who took over power without any clashes is now in the process of establishing a government. The people of USA are expressing their ‘disappointment’ against what is going on Afghanistan though. The footages from the Kabul Airport when US troops were being withdrawn and the failure in evacuation is the talk in the whole world. Two major questions of the agenda are whether Washington will be a reliable partner from now on and whether Taliban will be recognized internationally.

We interviewed Turkey’s Former Minister of Foreign Affairs (2002-2003) Yaşar Yakış and academician and political scientist Dr. Barış Adıbelli on the developments in Afghanistan and the role of Turkey.

‘NATO has done its turn’

Former Minister of Foreign Affairs Yaşar Yakış pointed to two major issues in Afghanistan and emphasized the independent characteristics of the Afghan people: “Afghanistan is a country that is called ‘The Graveyard of Empires’. Alexander the Great tried to conquer the land and failed. Turks have tried at the time of Mahmud of Ghazni to no avail. In 1830, Britain thought about invading and was not successful either. Russia also failed in 1970s. Now, NATO tried to control it for 20 years, but it has failed as well. Four failed attempts to control Afghanistan. It shows us how Afghan people are.”

Yakış said NATO has done its turn today and that we must seek solutions out of the NATO, which failed in Afghanistan: “Turkey, Russia and China may produce a common solution. You know, Russia has experience on this field, it is important to tap into that experience. China also has a narrow border of 70 – 80 kms, Afghanistan stretches towards China like a corridor and that corridor corresponds to the Uyghur region. There is a problem of radical Islamism in Uyghur region. Therefore China attaches importance to the project to make Afghanistan stable again. Turkey can play an important role here. There is a historical vicinity between Turkey and Afghanistan which other countries don’t have.”

‘Turkey and Afghanistan have historical ties’

Yaşar Yakış provided some examples on the historical vicinity between Turkey and Afghanistan:

“In 1915, as Turks were battling the British in Çanakkale War, Afghans said ‘we are fighting the British as well, so let us go to Çanakkale and help the Turks’ and they sent voluntary troops. Then, when Atatürk revolutions started, Amanullah Khan, the King of Afghanistan, who was a well-read man, married a lady from one of the most intellectual families in the region, Süreyya Hanım from Terzi family. Süreyya Hanım admired the reforms in Turkey. When there was a search for land to build the Turkish Embassy in Kabul, Süreyya Hanım donated her land as well as the houses on it to Turkish Embassy. Turkey made great contributions to the modernization period of Afghanistan at that time. Turkish doctors went there to build hospitals, pharmacies and pharmaceutical organizations were opened. Turkey also established a conservatory for music. The first example that fits in the definition of technical aid is the aid sent by Turkey to Afghanistan in 1928. This is the first example of technical aid in the world. So, this is how the historical relation between Afghanistan and Turkey.”

Yakış emphasized that Turkey must utilize this vicinity and made the following suggestions: “It is important that our President has said ‘I can get on with Taliban too’. There is not one Taliban, there are several Taliban groups and each has its own philosophy. USA, China and Russia are all in contact with Taliban. We have to contact them too. The opposition in Turkey might object to this, however, instead of saying that one must assess Taliban as a force that has seized the government and act according to this reality and build relations immediately. Turkey has several good diplomats and educated people. There are people who know Afghanistan and Central Asia, people who have served there. We must discuss the best model for the region by benefiting from their experience.”

‘It’s a big trauma for the United States of America’

Dr. Barış Adıbelli, who primarily talked about the failure of the USA, explained the reflection of this failure as follows:

“The United States of America has been openly disgraced. This was reflected on its own media as well. For example, American media started their broadcast with the following headlines recently: ‘Today is a dark day for the USA’, ‘Gani ran away, Biden is hiding’, ‘USA flag taken down in Kabul Airport’. These are headlines from the American media. They have even asked this: ‘Where is the Afghan army which we have trained and equipped by spending so much money?’ It was only last month when Biden went in front of the TV cameras and said: ‘Who the hell is Taliban, what will 75 thousand people do against the powerful Afghan army of 300 thousand people’. However, today, it is said that those 300,000 people is just a number on paper and the real force is only about 6.000. Most of them were ‘cash machine troops’ as you would understand. Therefore, it has been the greatest fiasco of the USA so far. The American media also refers to the withdrawal from Saigon and says ‘We are in a worse state than Vietnam’. There are expressions stating Kabul as ‘Biden’s Saigon’. There is harsh criticism against the Biden government. In fact, what we have just witnessed is the full blown reflection of a great political incompetence of the USA. An American senator even said ‘Today, America is less safe’. This is how great the syndrome and trauma of this event is in the USA”.

Adıbelli stated that the USA left the country in a chaotic manner and emphasized that the embassies of Turkey, Russia and China are still open in Kabul. Adıbelli said the following on the government that will probably be established: “Now, there is talk about a temporary government for the near future. It is said that a trio made up of Hamid Karzai, Dr. Abdullah Abdullah and Gulbuddin Hekmatyar is to go to Doha and meet the political representatives of Taliban and a mutual formula will be found. Taliban also made a statement saying ‘We seek a broad-based government’. However, they have later said that they will build an Islamic Emirate. The problem here is there are several different voices coming out of Taliban, they are not making statements from a single mouth. There are statements from either Doha or Afghanistan. This will probably be cleared out in the following days.”

‘The Indo-Pacific strategy of the USA is also at stake’

Adıbelli underlined that the USA desires to create chaos while withdrawing from Afghanistan and continued as follows: ‘Therefore, it made some efforts to take measures against the rising Asia. For the USA, Russia and China acting together in Asia and especially them improving their military relations is a great disturbance. It is interesting that the fall of the USA happened just at a time when the Chinese leg of the Zapad-2021 exercise is taking place.

“When we assess the whole situation we get the following picture: The USA is getting pushed away from the Eurasia. Do you know why Afghanistan is important for the USA? Because the Indo-Pacific strategy of the USA is now at stake as well with the withdrawal from Afghanistan. The USA does not only desire to be in the seas, it desires to be at the hinterland of Asia. Therefore, since the beginning, the USA had the tendency to spread the Arab Spring to Eurasia. There were especially major shifts in the Caspian geopolitics with the Karabakh victory of last year. Therefore a process, which was not foreseen by the USA, has started. From now on, the process will spread through the Central Asia. The USA is trying to spread the violence in Afghanistan through the Central Asia and protect its own interests benefiting from the chaotic order to be established here.”

Adıbelli also stated his opinion on Taliban, who is in power in Afghanistan now and said:

“The Taliban today is not like the Taliban 20 years ago, the generation has changed, it now has young militants who use the technology well and who read the region and the world correctly. Those are not the old militants who had blinders on their views. The new Taliban says they will work with everyone, they attach importance to international recognition as well as Russia, China and even the West. It is very hard for Taliban to prevail in Afghanistan unless it is recognized internationally. As you know there is also a 6-way collaboration Project in West Asia. If this is realized, Afghanistan will also be a part of it in the upcoming days. Of course, this is not what the USA wants. However, its allies don’t support the USA like they used to. If USA would like to gather its NATO allies and enter Afghanistan again, it would not be able to find anybody who is up for it. The USA may now try to divide Afghanistan. It can try to bring up new forces against the Taliban and try to divide the country into 2 or 3. We have this danger in front of us.”

‘Turkey has advantages in Afghanistan’

Dr. Barış Adıbelli emphasized the importance of the role of Turkey against the USA’s plans to divide Afghanistan and said that Turkey must carry out relations with Afghanistan independently from the NATO:

“Turkey’s role against the plans for dividing Afghanistan is very important. However, NATO’s mission in there has ended. Therefore, Turkey may withdraw its troops who are there within the context of NATO cooperation and can enter into a new negotiation with the new government, and eventually return without the scope of NATO. When we read between the lines in Taliban’s statements, we can see that they attach importance to Turkey. We have advantages both in Afghanistan and Taliban issues: First is that Turkey is really close with Qatar, where Taliban’s political office is located. Second is that there is close strategic relations with Pakistan, who is Taliban’s protector. I think Turkey has prepared for the Taliban issue long before. Turkey can easily build relations with Taliban through the political office over Qatar and in the field over Pakistan. A new process is starting. Look at the embassies, which are still open in Kabul. Russia, China and Turkey. These are the countries that put the greatest effort in this process. Both in terms of the Afghan government and in terms of Taliban. Of course, it is important to prevent the USA from confusing Taliban in the upcoming days. To this end, the role of the regional countries and other Asian countries is very important.”