Best time for Turkey to apply for SCO membership 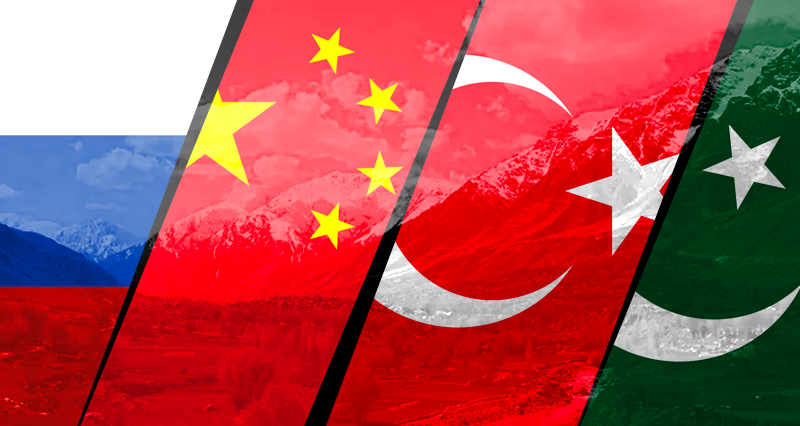 The United States has started its withdrawal from Afghanistan, which in the last days have taken more a form of fleeing. As the Taliban forces have conquered great parts of the country and arrived at the capital city of Kabul, the US embassy has started burning documents, while President Biden hastily deployed 6.000 troops to ensure the evacuation of US military and civil personnel as well of Afghans, which have been collaborating with the US in the last 20 years.

While the US withdrawal has been described in the American press as “a defeat” and been compared to the situation of Saigon, Vietnam in 1975, several experts state that the events constitute the acceleration towards a multipolar world.

The Taliban factually have taken over the power, though negotiations for a transitional government between different political forces inside Afghanistan and international powers continue.

At the same time, a strong refugee wave from Afghanistan to neighboring countries is taking place, resembling former waves from Syria and Iraq.

The political future of Afghanistan generally and the issue of refugees specifically have entered into the focus of Eurasian countries. Countries from China to Uzbekistan, Pakistan to Russia till Turkey in the west are discussion relations with the Taliban, evaluating options for Afghanistan’s future and solutions for the refugee problem.

Turkey is one of these countries. Ankara had traditionally very good relations with Afghanistan from the days of the Turkish Republic’s foundation. Turkey has been involved into the situation in the recent years actively, the Turkish and American governments have been discussing in the last weeks Turkey’s role in potentially securing and managing the Kabul International Airport and the country found itself targeted by the US, when the Department of State proposed the Afghans to flee to Turkey when leaving the country. The eventuality of Afghans feeling in great numbers to Turkey weighs in stronger, as the country is already hosting more than 4 million refugees from Syria.

Turkey’s Vatan Party, which is known for very good relations to Eurasian countries such as China, Russia, Iran and Syria has convened its Presidential Council on Saturday to evaluate the situation in Afghanistan, propose a course of action and specifically discuss the refugee problem.

The Presidential Council emphasized in its declaration the historic US defeat, the need for Eurasian cooperation on Afghanistan’s future and proposed that Turkey should not hesitate further to apply for a full membership in the Shanghai Cooperation Organization.

Below, United World International documents the declaration of the Presidential Council of the Vatan Party. In the coming days, we will present more voices from Eurasia on Afghanistan’s future.

Decision on the issue of Afghanistan and the refugees

The Presidential Council of the Vatan Party (Turkey) has convened on August 13th, 2021, and approved by unanimous vote the following statement on Afghanistan and the refugees.

1. The US imperialism was defeated in Afghanistan. The Afghan people are reaching its victory of independence after having fought against British imperialism in the 1920s, Soviet social imperialism after 1979 and US imperialism in the last 20 years. We gratefully remember that Afghanistan under the leadership of Amanullah Khan showed solidarity with our Turkey’s War of Liberation and that it was one of the first two countries to recognize our Republic.

2. It has become evident once again that the United States is the least reliable partner. All plans in our region that were calculating on US cooperation have failed.  The process of establishing a multipolar world has gained strength. It has also become evident that solidarity and cooperation in Eurasia is the way to solve problems.

3. As all countries of the world acknowledge is the Taliban organization very close to reach its final goal in the armed struggle against US imperialism and its collaborators. The process is heading to a point where a government in Afghanistan will be established, which unites the country and secures its independence. Internationally, the Taliban organization is already being accepted as a legitimate force in Afghanistan.

4. Under these circumstances, the US has started to apply a Chaos Plan against Afghanistan’s neighbors, beginning with Turkey, threatening these with a wave of refugees. The US also aims to weaken the solidarity and problem-solving capacity of the regional countries.

5. The United States’ Chaos Plan will be foiled by the Eurasian countries’ unity and solidarity. Here, specifically the unity, cooperation and struggle of Afghanistan, Pakistan, China, Russia and Iran play a great role for the future of humanity. We call on the government of the Republic of Turkey to establish a platform of the mentioned countries and others to provide cooperation and enable solutions.

6. The right to determine the government of Afghanistan belongs to the Afghan nation. The government of the Republic of Turkey should immediately begin official contacts with the Taliban leadership in order to provide Afghanistan’s independence and unity against the US Chaos Plan, to provide regional stability and to develop bilateral relations.

7. The government of the Republic of Turkey, which has stated its will to manage and secure the airport of Kabul, should announce officially that it will respect the Afghan sovereignty and retreat its military forces, should the legitimate Afghan government decide and demand this in the future. By demanding Hungary’s and Pakistan’s inclusion into the Mission Force, Turkey has displayed clearly its will to pursue the mission within the framework of Afghanistan’s independence and sovereign relations to the world. It needs to be communicated to the Taliban leadership that Turkey’s military will not be stationed in Kabul in the name of NATO and that it will not represent the interests of another country.

8. As Vatan Party, we consider appropriate the declaration, which the spokesperson of the foreign ministry of the Republic of Turkey made on August 2nd, 2021, answering former statement of the US Department of State. We strongly condemn that the US Department of State pointed also to Turkey as a country, where the Afghans and their families that cooperated with the US might emigrate. We share the position and emphasis made by the Turkish foreign ministry. “Instead of looking for a solution among countries within the region, seeking a solution in Turkey without our consent is unacceptable. (…) We do not accept the US’ irresponsible decision taken without prior consultation. The US may directly transport these people by plane. Turkey will not take over the international responsibilities of third countries and will not tolerate abuse of our laws by third countries for their own purposes under any circumstances. The Turkish Nation cannot bear the burden of refugee crises resulting from the decisions undertaken by third countries”.

9. In order to heal the wounds of the Afghan people, to unite them and to prevent a migration wave from Afghanistan, the Taliban leadership’s amnesty measures should be supported.

10. Turkey must enter cooperation with Syria in all aspects including the military dimension immediately. All terror organizations under US guidance, such as the PKK/PYD/YPG and Daesh must be eliminated in joint military action. The territorial integrity of the Syrian Arab Republic must be provided. On that way, conditions must be established for the return of the Syrian refugees and irregular immigrants back to their country. The Syrians in Turkey should be encouraged to make use of the general amnesty declared by the Syrian Presidency and announced on May 2nd, 2021 in the Syrian official gazette. The Syrian President Bashar Al Assad called during his ceremony of presidency on July 17th, 2021, to those people forced to live outside Syria “to return to the fatherland and home”. This call should be supported. As in the past, the Vatan Party ready to for all duties and responsibilities to enable Turkish-Syrian cooperation and to take concrete steps for the return of the Syrian refugees to their homeland.

11. The Syrian and Afghan refugees in Turkey are our nations honorable guests. Their safety and security is entrusted to the Turkish state as well as to the Turkish nation, which has a thousand-year-old-culture of living together and in harmony with different peoples. Our conscience and our national honor demand to condemn as a nation all kinds of action that provoke hatred between our people and the refugees. In that context, we call on the leaderships of the Republican People’s Party (CHP) and the Good Party (Iyi Parti) constructively to stop provocations, which are rooted in the Atlantic System. State institutions should take and apply all necessary and legal measures to stop the provocations via social media and means of mass communication that started against the refugees recently.

12. All irregular immigrants who have not received a refugee status should immediately get a temporary status, including measures on how to end this temporary standing. Concerning migrations movements, the Readmission Agreement signed in the process of Turkey’s membership to the European Union specifically during the governance of Ahmet Davutoğlu should be revised.

13. Turkey should act together with its neighbors and Eurasian countries in order to strengthen brotherhood and unity between the states and peoples of our region.

14. Turkey’s independence, unity, territorial integrity, safety, peace and economic development can only be achieved in the Eurasian context. Turkey’s partners in security and economy in the 21st century, Russia and China, which are also leaders of the rising Asian civilization, are members of the Shanghai Cooperation Organization (SCO). Azerbaijan, Kazakhstan, Turkmenistan, Uzbekistan and Kirgizstan, which comprise the Turkic world, are also members or member candidates of the SCO. The SCO also embraces important Asian powers such as Pakistan and India. Our neighbor Iran has applied for membership in the SCO. In order to take its place among the leaders of the rising Asian civilization, Turkey can no longer postpone its application for full membership in the SCO.

We declare this statement respectfully to the Turkish nation and the world public opinion.