Defense Minister’s visit to Pakistani Army Chief; New medal record for Turkish athletes in 2020 Tokyo Olympics; The struggle to control the remaining wildfires across the country 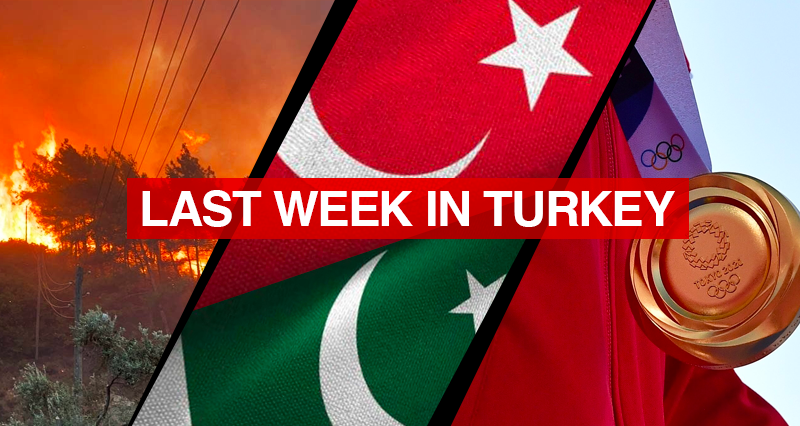 The second was the new Olympic record for the Turkish athletes in numbers of medals brought home, surpassing the previous record in 1948.

The third was the ongoing struggles to put out the remaining wildfires, which devastated a huge portion of the country the previous week.

Hulusi Akar arrived in the Pakistani capital Islamabad met with General Qamar Javed Bajwa at the Pakistan Army headquarters in the garrison city of Rawalpindi, according to a statement from the army’s media outlet.

Akar will discuss bilateral cooperation in military, security, and defense fields as well as the regional issues and latest developments in Afghanistan.

During the meeting, matters of mutual interest, including defense and security cooperation between the two countries and overall regional security, were discussed, the statement said.

Akar, for his part, reaffirmed Ankara’s full support to Pakistan’s stance on regional and international issues, it added.

Both officials reiterated their desire to further advance bilateral ties, including with efforts for peace and stability in the region.

The US will complete the withdrawal of its forces at the end of this month under a deal with the Taliban, which included the withdrawal of foreign forces in exchange for Taliban promises to prevent Afghanistan from being used for international terrorism.

Under the deal, the Taliban were meant to seek peace with the Afghan government, but months of intermittent talks have been fruitless.

Government officials have appealed for pressure on neighboring Pakistan to stop Taliban reinforcements and supplies flowing over the porous border. Pakistan denies backing the Taliban.

Turkish athletes have won a total of 13 medals at the 2020 Tokyo Olympics, which ended last Sunday, making it the most successful Games ever for their country in terms of total medals won.

Turkey grabbed two gold medals, two silvers and nine bronze medals while also being represented for the first time in the final of some events.

Turkey enjoyed its best Olympics ever in the Japanese capital, beating its medal record from London 1948, where it bagged 12 Olympic medals – six golds, four silvers, and two bronzes.

Turkey ranked 35th in this year’s medal ranking, which was led by the US and China in the top two slots, followed by the host country Japan.

Another Turkish boxer Buse Naz Cakiroglu also fought for gold earlier in the day but lost to Stoyka Zhelyazkova Krasteva of Bulgaria in the final of the flyweight category.

Cakiroglu’s silver medal was the first Olympic medal for Turkey in women’s boxing, while Surmeneli grabbed the first-ever gold for the country at the event.

Also on Saturday, Ugur Aktaş won a bronze medal in the men’s 75-kg karate, increasing Turkey’s total medals tally in karate at the 2020 Olympics to four, including a silver medal from Eray Samdan and bronze medal from Ali Sofuoglu and Merve Coban.

Despite the high expectations, men’s wrestling, which traditionally brought medals for Turkey in previous Olympic games, was not the country’s strongest suit in Tokyo this time. Men won just two bronze medals, with Taha Akgul in the 125-kg freestyle and Riza Kayaalp in 130-kg Greco Roman.

In the women’s javelin throw, Eda Tugsuz became the first Turkish athlete to compete in the final and finished fourth with a throw of the season’s best 64.0 meters.

In the men’s events, two Turkish athletes made it to the finals for the first time in two categories: Necati Er in the triple jump and Ersu Sasma in the pole vault.

Ferhat Arican made history by winning Turkey’s first-ever gymnastics medal at the Olympics when he clinched bronze in the men’s parallel bar event.

Eleven of Turkey’s 13 medals were won in martial arts competitions.

The Tokyo Games ended last Sunday with a closing ceremony at the Japan National Stadium.

The struggle to control the remaining wildfires across the country

As many as 274 forest fires in Turkey have been brought under control while one continues to burn in the Aegean province of Mugla, the country’s agriculture and forestry minister said Tuesday.

Speaking at a news conference prior to a firefighting coordination meeting in the town of Marmaris, Bekir Pakdemirli said Turkey has been combatting massive blazes for 14 days.

Pakdemirli said a total of 275 fires erupted in 53 provinces across the country due to hot, windy and dry weather conditions.

He said in two separate Twitter posts late Tuesday that blazes in Milas and Bodrum districts of Mugla province had been contained and cooling efforts were underway.

He noted that efforts to extinguish another fire in Mugla were continuing on land along with aerial operations.

Firefighters have been combatting the blazes for 13 days straight, he said, adding that anyone who wants to volunteer to join the fight can apply online at turkiye.gov.tr.

Damage suffered by 7,735 farmers has been determined across nine provinces, 26 districts, and 180 villages of Turkey, he stated, adding: “About 4,500 beehives were decimated by wildfires in Mugla.”

In Mugla, the country’s honeydew hub, Turkey will establish new honey facilities, he pledged, as well as compensate for lost cattle.

The Mugla Governorship said in a statement on Monday that seven planes, 39 helicopters, two drones, 10,547 personnel, and 2,545 vehicles took part in efforts to get the flames under control.

Some 38,715 people were evacuated from the region due to the fires, it said.

The minister noted that the blaze in Milas was difficult to contain as flames in scrubs have a longer burning rate, unlike pine forests.

He said that they also managed to stop the fire from reaching a thermal power plant and had cleared the area around the plant of flammable materials as a precaution.

Later in the day, Pakdemirli announced that Milas fire has now been taken under control.

On the Koycegiz fire, Pakdemirli said it was “confined to the valley,” “under control” and will not spread further.

The treatment of 15 people out of 687 affected by the fire continues, while 672 people have been discharged from hospitals, it added.

A fire close to the Kemerkoy thermal power plant was extinguished, it noted, saying precautionary measures were taken at the power plant.

Investigations are still underway to determine the cause of the fires, though authorities had expressed that they suspected the PKK terrorist group’s involvement.

A suspect was apprehended over one of the fires in Manavgat last week.

On Monday, another suspect, accused of starting a fire in Antalya’s Akseki district, was remanded in custody. Authorities did not disclose whether the suspects were affiliated with any terrorist group.

Sent to Turkey to assist in its fight against the wildfires, a Spanish crew has played an important role in containing the fires affecting large areas of forestland.

Major Juan Borrego, the field coordinator for the Spanish team, described their experience in Turkey and how they came together to douse fires in Marmaris, Milas, and Koycegiz, in an interview.

Borrego applauded the coordination between his crew and the Turkish units, noting that the Spanish crew was made up of 27 members, five working in emergency management and 22 responsible for flights.

The crew has experience containing fires in their home country, he said, but the wildfires in Turkey were the largest the Spanish team has ever faced.

The team was impressed by the Turks’ hospitability and, despite the reason for their visit, enjoyed their time in Turkey, he said.

The Turkish coordination center handled the situation well given that there were several pilots of foreign origin involved in the process and planes with varying engines, capacities and water-loading systems.

Noting previously announced plans to dispatch two planes to Greece upon its request for extra firefighting aircraft, Pakdemirli said: “When we have surplus capacity, we shouldn’t avoid sending them to our neighbors.”

“The forests are not only our own but belong to the entire world,” he continued. “The flora and wildlife here belong to the whole world.”

On the ongoing blazes in Greece, Pakdemirli said: “The size of the fires have reached very critical dimensions, considering the size of the country and its forestlands.”

He added that the flames pose a “serious” threat to residential areas.

Greece has been fighting wildfires for eight days, with thousands of people evacuated so far.