Rapid wildfires across Turkey; First Olympic successes for the Turkish athletes; Telephone conversation between the Presidents of Turkey and Tunisia 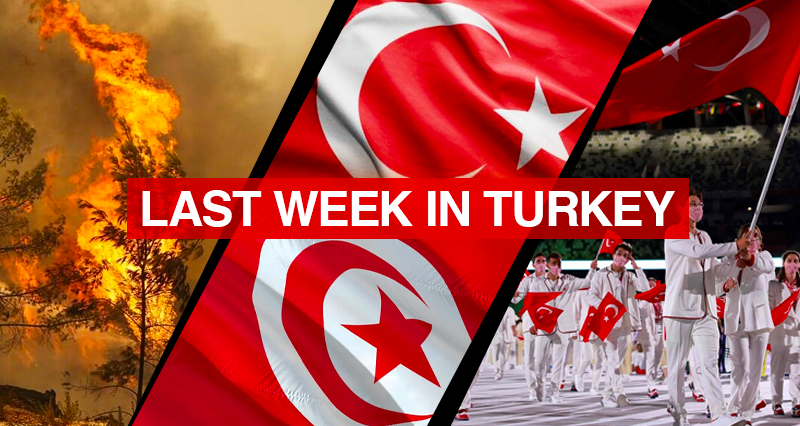 The first topic was the rapid wildfires that spread across the entire nation in 132 different locations throughout the last week.

The second was the successes of Turkish athletes in the 2020 Summer Olympic Games in Tokyo.

The third was the telephone conversation between the Presidents of Turkey and Tunisia.

Massive forest fires have been blazing all around the country over the last week.

The fires, which have killed more than eight people according to official numbers, first began in Turkey’s Mediterranean coastal city of Antalya back in last Thursday.

Many houses, workplaces, barns, farmland, greenhouses, and vehicles were damaged due to the blaze, while a dozen teams are currently doing damage assessment.

The Turkish Red Crescent sent a field kitchen, five catering vehicles, and catering units with a capacity for over 20,000 people.

The Minister of Agriculture and Forestry, Bekir Pakdemirli and Foreign Minister Mevlut Cavusoglu examined the area of the fire, which started at four different spots in Manavgat before spreading further.

“Our hope is that the fires both in Manavgat and in various parts of Turkey are brought under control and extinguished,” Cavusoglu said.

He also said that an investigation into the cause of the fires was being carried out.

Pakdemirli announced on Monday that 125 of 132 forest fires in the country are under control.

A total of 16 aircraft, nine drones, 51 helicopters, one unmanned helicopter, 850 water sprinklers, and 150 construction machines have been used to tackle the fires, the minister said, adding that over 5,000 personnel are on duty.

Fire crews are working in Marmaris and Koycegiz districts of Mugla on the southern Aegean coast of Turkey on Monday to extinguish the wildfires.

The international community on Monday condoled with Turkey over wildfires that have led to deaths and material damage over the past few days.

Azerbaijan dispatched another firefighting team early Monday to support Turkey as it battles forest fires ravaging the country since Wednesday. Consisting of 53 vehicles including 41 fire trucks and 220 personnel, the team was received by excited Turkish citizens who showed their appreciation for the Azerbaijani and Turkish flags.

Many other diplomats and leaders contacted with the Turkish officials including those from Yemen, Palestine, Egypt, Kyrgyzstan, the European Commission, Croatia, Spain, Israel, Sweden, Qatar, Moldova’s autonomous Gagauzia region and Hungary.

As the forest fires spread in an unprecedented pace, some allegations on whether they could be result of arson and sabotage have erupted through the social media.

The Turkish government has announced that an evidence of sabotage was yet to be found. However the public put a branch of the PKK so-called “Children of Fire”, who had been conducting sabotage forest arsons in the previous years, on focus.

And the so-called ‘Children of Fire’ have already made an announcement claiming responsibility for the fires devastating southern Turkey.

In the announcement, the PKK sidearm has announced a so-called “Collapse Movement”.

The Children of Fire initiative sent a warning that their members include everyday people in society ready to act when called upon.

The Children of Fire Initiative also warned that their targets were not only the Turkish military, but also supporters and members of the ruling Justice and Development Party (AKP) and Nationalist Movement Party (MHP) coalition.

“We will set your cars, businesses, crops and cities on fire” said the announcement, similar to some of the previous statements of the so-called PKK leader Semdin Sakik and HDP (a pro-PKK party in Turkey) leader Selahattin Demirtas.

Before this recent announcement, it was mostly claimed by both the government officials and by many other political parties that the main reason behind these fires were heat waves due to the climate change and winds that rapidly carries the highly flammable pinecones native to the region.

Turkish athletes have started achieving successes and medals at the Summer Olympic Games 2020 in Tokyo.

The first medal came from Turkish archer Mete Gazoz, who won a gold in men’s individual archery final at the 2020 Tokyo Olympics, bringing his country its first-ever Olympic medal in archery on Saturday.

Facing world No. 7 Italian archer Mauro Nespoli in the final, the 22-year-old won the match 6-4 and bagged the gold medal.

He thanked his family, trainer, federation and others for the achievement. “Today I’m happy to achieve the Olympic medal I have dreamed of for years,” he said on Twitter.

Turkish female boxer Busenaz Surmeneli beat her opponent on Friday, to advance to the semi-finals at the 2020 Tokyo Olympic Games.

The 23-year-old Surmeneli competed against Ukrainian athlete Anna Lysenko in the quarterfinals of the women’s 69 kilogram division at Kokugikan Arena.

Surmeneli also made history, as she became the first Turkish athlete to be guaranteed an Olympic medal in women’s boxing.

“The Olympics are my childhood dream. I still live with a dream,” she said at the time.

Kayaalp, 31, has beaten his Iranian, Lithuanian and German opponents, and was defeated by his Cuban opponent, bagging his third Olympic medal.

She has beaten her Brazilian, Kyrgyz and Tunisian opponents, but was defeated by her American opponent, winning her a bronze medal in a freestyle 76kg match.

Turkish women’s volleyball team has managed to qualify to the quarterfinals, but was beaten with a close score by South Korea.

The team has so far beaten their Russian, Argentinian and Chinese opponents, but was beaten by their Italian and American opponents.

Hatice Kubra Ilgun has won a bronze medal in women 57 kg Taekwondo, by beating her Costa Rican, Moroccan and Iranian opponents, but was beaten by her American opponent.

Hakan Recber had also won a bronze medal in men 68 kg Taekwondo, by beating his Brazilian, New Zealander and Bosnian opponent, but was beaten by his British opponent.

Finally Ferhat Arican had won a bronze medal in men’s artistic gymnastics, winning a score of 15.633, behind his Chinese and German sports fellows, and above Russian American Ukrainian and British fellows.

Telephone conversation between the Presidents of Turkey and Tunisia

Erdogan told Kais Saied that stability, peace, and serenity in Tunisia are important and benefit the whole region, said the sources, who asked not to be named due to restrictions on speaking to the media.

He also underlined that Tunisia protecting its democracy, respecting the rule of law, and guaranteeing freedom all carry great value.

Erdogan furthermore emphasized that it is important for both Tunisian and regional democracy that the activities of the Tunisian parliament continue despite recent challenges.

Yesterday, Saied has also dismissed the Tunisia’s ambassador to the US, along with many public officials and provincial governors.

Tunisia has been perceived as one of the few countries that has succeeded in a relatively peaceful transition of the government, among a group of Arab countries that witnessed some popular revolutions in the early 2010s that toppled their governments, including Egypt, Libya, and Yemen.