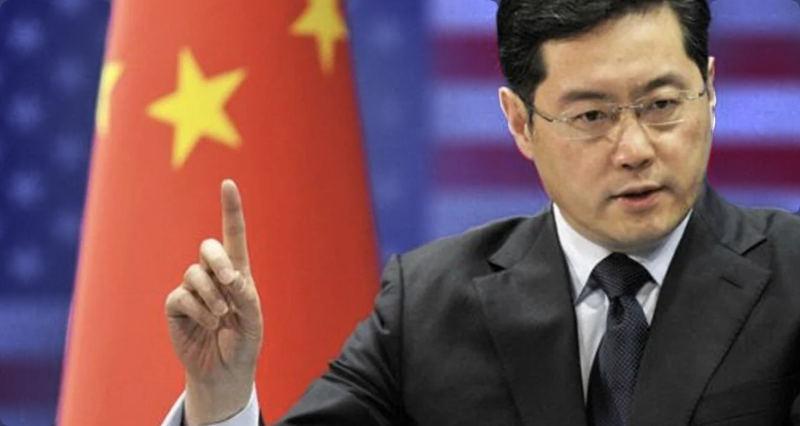 China’s new Ambassador to the USA, Qin Gang, who started his duty upon arriving in Washington, will lead a critical period in the relations between the two countries.

Qin Gang is a very remarkable person who replaced Cui Tiankai, the 68-year-old ambassador of China who has served the longest time in Washington. Qin, a young 55-year-old yet experienced diplomat, has held positions in China’s Ministry of Foreign Affairs since 1988. Qin, whose star has risen in recent years by accompanying President Xi Jinping on many overseas trips, has been serving as deputy minister for European Relations at the Chinese Ministry of Foreign Affairs since 2018. Qin Gang, who has served in various attaché and senior foreign ministry positions in the UK and Western Europe, is a well-known name in the Western media, who stands out with his retorts against the ideological attacks of the West.

As soon as Qin was appointed, the Western media showed its ‘interest’ in him. For example, the news outlet Bloomberg announced Qin’s appointment with this headline: “China Sends Sharp-Tongued Diplomat as Ambassador to U.S”. Bloomberg also describes the reason of Qin’s designation as follows: “China dispatched a veteran diplomat known for pushing back against Western criticism to serve as its next ambassador to the U.S., an appointment that suggests Beijing is bracing for a period of prolonged tension with Washington.” (1)

Furthermore, the US-based news radio NPR reported on the appointment of the Ambassador with the following headline: “China’s New U.S. Ambassador Pioneered The Foreign Ministry’s Brash Tone”. (2) NPR also describes Qin in the news with these words: “He made his name as a two-time spokesperson for the foreign ministry, establishing a more acerbic style of communication with the foreign press and diplomats as China began to gain geopolitical and economic prominence”. The same article also reports on the Ambassador’s activities related to the West: “Qin has also struck a tough line in his current post as a vice minister overseeing European affairs. During his tenure beginning in 2018, he oversaw the Chinese response to coordinated British, American and European Union sanctions on four senior Chinese officials over human rights abuses in the region of Xinjiang.” The report emphasizes that Qin was influential in the counter-sanction decision taken by Beijing against the West.

The New York Times meanwhile announced Qin’s appointment with the headline, “China’s New U.S. Ambassador Is Likely to Reflect Beijing’s Confidence”. The newspaper commented on the appointment in terms of relations between the two countries as follows: “Qin Gang, a diplomat whose record of vigorously contesting Western criticism suggests that Beijing is steeling for extended tensions with Washington.” (3)

Atlantic Council Senior Member Dexter Roberts commented on Qin’s appointment in the context of US-China relations: “It’s just different worlds now, and I do see him as sort of a part of that transition towards a new or far less friendly, even hostile relationship.” (4)

The British newspaper Guardian also displayed its uneasiness about Qin: “As a former foreign ministry spokesperson, Qin is known for his uncompromising handling of foreign media and defending China’s image.”(5)

‘Front man in the conflict with the United States’

The German magazine Der Spiegel also reported on Qin’s appointment with this headline: “Front man in the great conflict of our time” (Frontmann im großen Konflikt unserer Zeit). (6) According to Der Spiegel, he is not just a random personality, because “China’s new man in Washington is Beijing’s front man in the conflict with the United States”. Spiegel’s news said that, in contrast to Cui Tiankai, Qin Gang belongs to the new generation Chinese diplomats who are more aggressive and follow the “wolf warrior” diplomacy. The term refers back to a series of Chinese films “Wolf Warrior”.

When Chinese diplomats started to actively respond to the hostile postings of Western politicians on social media, Westerners became uneasy and used the term “The Wolf showed her teeth”. Qin Qang described them as the ‘evil wolves’. Therefore, just like the rest of the Western media, Der Spiegel also evaluated Qin Gang as an aggressive diplomat.

The Chinese media commented on the appointment of the experienced diplomat, saying that the tense relations between the two countries could enter a new process. Qin Gang delivered positive messages in his first statement to reporters at the embassy building in the US capital. Reminding Henry Kissinger’s visit to China in 1971, Qin said, “I believe that the door of China-US relations, which is already open, cannot be closed. This is the trend of the world, the call of the times, and the will of the people”. The Ambassador also stressed that the relationship between China and the United States faces many challenges, as well as great opportunities and potentials. Chinese media highlighted the following from Qin’s statements: “He would work to safeguard the foundation of China-U.S. relations, uphold the shared interests of the two peoples, and endeavor to bring China-U.S. relations back on track”. (7)

Qin’s appointment to Washington comes at a time when the bilateral relationship is going through a tense phase. Biden, like his predecessor Trump, has continued to pressure China and tightened US sanctions against Chinese officials. He calls China as “the biggest geopolitical test” of this century. On the other hand, China does not hesitate to respond strongly to the USA. As the Biden administration has been seeking to build alliances around the world to contest China, the Chinese President Xi has warned against the risks of a ‘new cold war’.

According to the Global Times, experienced diplomat Qin has the ability to work under heavy pressure. Therefore, China’s expectation is that Qin can manage the bilateral tension skillfully. “Chinese-U.S. relations are now at a crucial crossroads,” his predecessor as ambassador to Washington, Cui Tiankai said in a farewell message last month on the Chinese Embassy’s website.

U.S. President Joe Biden has plans to appoint the former ambassador to NATO, Nicholas Burns to China, the New York Times reported in May. His appointment has not yet been confirmed.