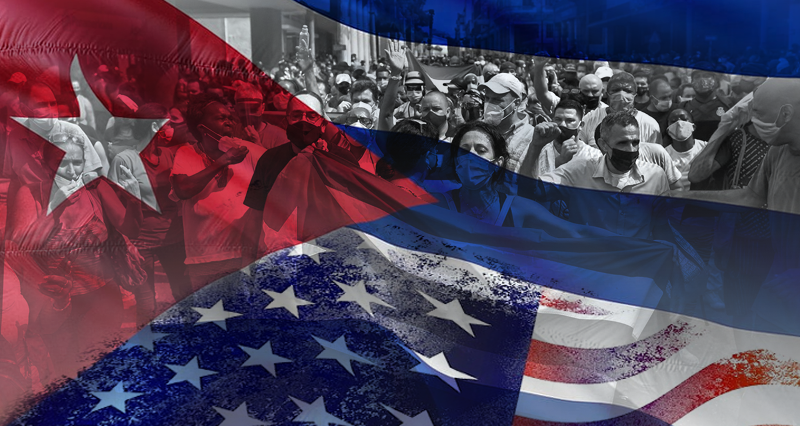 The United States is continuing its pressure on Cuba and the socialist republic resists.

Following the protests of July 11, which partly were supported and organized by the United States, president Biden declared Cuba a “failed state repressing its citizens” on July 15.

Biden stated, “communism is a failed system — a universally failed system. And I don’t see socialism as a very useful substitute, but that’s another story.”

Though the Biden Administration is currently pursuing a review of the Cuba policy, in a press conference on July 12, White House Spokesperson Jen Psaki confirmed that the main US goals have not changed:

“First, support for democracy and human rights through empowering the Cuban people to determine their own future.  Second, Americans, especially Cuban Americans, are the best ambassadors for freedom and prosperity in Cuba.”

A clear statement on the goal of regime change via popular protests – for which, labeled as “democracy assistance”, the US spends “20 million dollars annually since 2009”, as Psaki admitted in the press conference.

On July 22, the White House announced 6 additional measures of pressure:

1. New sanctions targeting the Cuban Minister of Defense and the ‘Brigada Especial Nacional’ of the Cuban Ministry of the Interior – a questionable measure as the minister had already been subject to sanctions.

The Cuban foreign minister Bruno Rodriguez responded by saying the US should apply these sanctions to itself due to “repression & police brutality that took the lives of 1021 persons in 2020”.

2. Engaging the international community and specifically the Organization of American States (OAS) to pressure on Cuba. The Cuban foreign minister denounced that the US is pressuring on 8 Latin American and 6 European countries to condemn Cuba.

3. Establishing Internet access and social media communication beyond the control of Cuba, for which “the Administration is actively collaborating with the private sector to identify creative ways”, as the White House stated.

A number of Florida politicians, including Rep. Maria Elvira Salazar (R-FL), are pointing to the possibility of sending high-tech balloons that operate as makeshift cell towers, to allow internet access to continue in Cuba even if Cuba’s government shuts it down as it did following protests last week, reported the Washington Post.

4. Meeting with Cuban-Americans to “help elevate the voices of demonstrators in Cuba”. The protests in Cuba itself were limited on July 11, but the exile community in Florida kept on protesting the socialist government for a week. While the police commissioner of Miami took actively part in these protests, the mayor of that town, Francis Suarez even demanded military intervention on Cuba.

Suarez, whose father also had been mayor of Miami, “What I’m suggesting is that option is one that has to be explored, and one that cannot be just simply discarded.”, when he was asked whether he was calling for air strikes in Cuba.

“The United States stands with the brave Cubans who have taken to the streets to oppose 62 years of repression under a communist regime.”

5. Reviewing remittances to Cuba. Money transfers from American-Cubans to their relatives constitute an important source of foreign currency income for Cuba. They were stopped when the Trump administration sanctioned FINCIMEX, the Cuban governmental currency exchange service.

As a side effect, the US’ capacity to transfer funds was also limited. Now, the administration is looking for ways “without a portion of the proceeds being siphoned off by the regime”.

6. Increasing US consular service in the Havana embassy – to raise the “ability to engage directly with the Cuban people”, as the State Department spokesperson reasoned.

American media already discusses that the US may ease up providing visas to Cubans, thus enabling a possible migration wave.

On the other side of the Florida straits, Cuba is resisting US pressure.

On July 17, thousands have gathered in support of the revolution in Havana’s Vedado district. President Miguel Diaz-Canel held a speech where the called the population to “place the fatherland, the revolution and socialism at the heart”.

Popular gatherings took also place in several cities of the country, where thousands of people gathered.

Cuban authorities responded sharply to US attempts. In a press conference held in July 14, foreign minister Rodriguez accused the US of having incited the protests by using social media platforms.

Johana Tablada, deputy director for U.S. affairs at Cuba’s Ministry of Foreign Affairs gave an interview to the American news agency Associated Press, where she claimed “There is a Walt Disney narrative of a bad government and people fighting for their freedom — stereotypes that scare anyone who has never set foot in Cuba, because of their arrogance and disregard for the truth”.

Judicial cases have been started against those who participated in actions of looting on July 11, with president Diaz-Canel stating “those who committed a crime will face all the response of Cuban law”.

Currently, there are no protest actions and peace prevails in the country, reports the Prensa Latina.

The Cuban government also accelerated its dealing with major problems of the country.

Power blackouts and electricity shortages had caused great criticism in the population, and the government announced the finalization of repair works in power plants as well as new investment regulations concerning foreign companies producing renewable energy.

Rising numbers of Covid-19 cases have also been an topic on the island, where recently the government turned some hotels into hospitals for applying quarantine.

Cuba has developed own vaccines to fight Covid-19, the Soberana, Abdala and Mambis, and Abdala vaccine has been applied to more than 2 million people or approximately 20% of the population. Cuba’s leading newspaper Granma reported in its printed edition on July 19 that ‘Abdala’ has prevented in 100% of the applied cases the turn of Covid-infection into a serious stage.

Concerning shortages in medicine supply caused by the embargo, lack of foreign currency and limits in importation, the government temporarily cancelled import duties on privately brought medicine and food from abroad.

The Mexican President Andres Manuel Lopez Obrador also joined the position, calling the US to lift the embargo if they are sincere to help Cubans. The Mexican government also declared it will sent two ships with urgent medical supplies to Cuba on July 25.

The CARICOM, the organization of 15 Caribbean stated, “The Community reiterates its calls for the immediate lifting of the trade, financial and economic sanctions as recently reiterated by the United Nations General Assembly”.

Russia, China and Iran also warned the US of interfering in Cuban domestic affairs.

In Moscow, Russian Deputy Foreign Minister Sergei Ryabkov met with Cuban ambassador Julio Garmendia Peña where “the Russian side expressed solidarity with Cuba’s government and people, and promised all-round support to the efforts towards the soonest normalization of the situation,” it was reported.

The spokesperson of the Chinese foreign ministry urged “the US to immediately and fully lift its embargo against Cuba”.Whitr