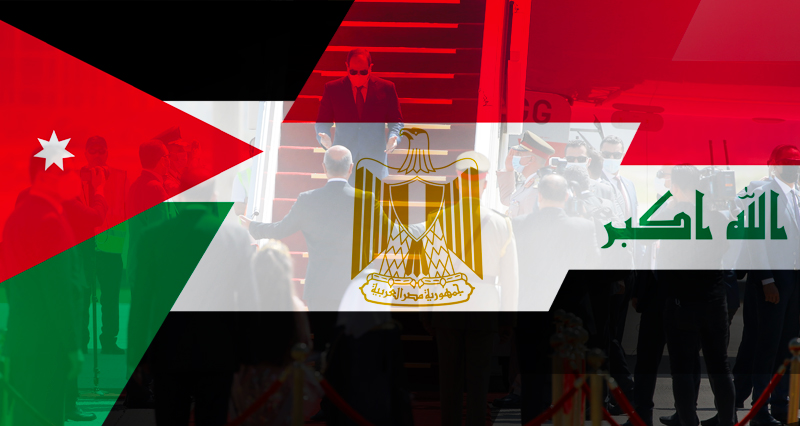 The Middle East is witnessing the birth of new coalitions generated by destruction. Like the big bang that resulted in the creation of the universe as we know it, ever since the fifties, the Arab region has witnessed destructive shifts that resulted in the birth of the Middle East as we know it now. The most recent even was in 2011 when the Arab Spring was ignited at one of the least expected capitals, Tunisia. The rebellious movement spread like wildfire to other Arab countries, contributing to a chaotic situation in some of the strongest capitals in the region including Cairo, Damascus, Sanaa, and Tripoli, the only exception was Tunisia, due to its long history of liberalism and secularism.

Baghdad was not part of this destruction, as it was already destroyed following the Gulf War in 1991, the ill-fated US invasion that flooded the country with chaos.

Today, Iraq sought to restore its leading role in the region by playing the role of mediator between the East and the West, especially between the Sunni and Shiite powers in the Middle East, Saudi Arabia and Iran, after reportedly hosting talks in April between Tehran and Riyadh.

On June 27, a historic summit took place in the historic city of Baghdad, where the King of Jordan Abdullah II met with Egypt’s President Abdel Fatah Al Sisi and the Iraqi Prime Minister Mustafa al-Kadhimi to establish what they called “The New Levant” between the three countries.

Baghdad’s meeting marks the fourth round of talks between the three leaders in three years and the first visit of an Egyptian president in three decades.

The first round of talks took place in March 2019 in Cairo, the second was in September of the same year in New York, on the sidelines of the annual session of the United Nations General Assembly, and the third was on August 25, 2020, in Amman. This latest convening was the first to include new Iraqi PM al-Kadhimi.

“The new levant project is not a new one, it was first proposed by the former Iraqi prime minister Haidar Al Abbadi,” Iraqi strategist Hussein Al-Jasser told Sky News Arabia. “It [the project] depends on Egypt’s human resources, Iraq’s oil wealth and Jordan as a linking country between the other two countries,” he added, stressing that more Arab countries will join this coalition, in an attempt to mobilize the moderate states in the region in one bloc to defy extremism and terrorism.

The project consists of several areas of common interest between the three countries, at the heart of which is the economy, where Cairo has a great interest to benefit from Iraq’s oil wealth, in return, it will transfer its construction expertise to the war-torn country.

The deal is to transfer the Iraqi oil to Egypt through Jordan, and in return, Egypt will provide Iraq with electricity through a power linkage between the two countries.

Iraq has been suffering from electricity shortage over the past few months, igniting protests across the nation as summer kicks in with a temperature that can reach 50°. The problem was sparked when Iran cut its gas supply to Iraq due to the US sanctions and Iraq’s failure to meet its payment dues, especially given the fact that it gets the third of its electricity supply from Iran (between 1.5 billion – 1.8 billion cubic feet of gas per day). This is a problem that Egypt can easily solve.

Sisi’s visit was shortly followed by a visit by the Egyptian Minister of Commerce and Industry, Nevine Gamea, accompanied by a delegate of officials and businessmen, where they discussed with Iraqi officials the business and trade opportunities between the two countries and measures to secure the Egyptian manpower and construction equipment.

The summit was praised by several regional and international powers, especially the Gulf monarchies and the US President Joe Biden’s administration for one big reason: it signaled the lessening of Iran’s influence in Iraq.

“The summit was a message for the United States that Iraq will not only have relations with Iran at the expense of Arab countries,” Iraqi analyst Ihsan al-Shamari told France 24.

The message was heard loud and clear in Washington, as the US State Department spokesperson, Ned Price said in a statement that Washington welcomed the “historic” visit, and called it “an important step in strengthening regional economic and security ties between Egypt, Iraq, and Jordan and to advance regional stability,” while the GCC countries hailed the new alliance by highlighting the “historic” summit in their media platforms.

Even Israel met the news with joy. “That is a big deal. It shows that Cairo and Baghdad are repositioning themselves as important regional centers after years of crises, conflict and the weakening of major states saw power shift to Turkey, Iran, Israel and Gulf nations,” The Jerusalem Post reported on June 28.

The new coalition is essential for the three countries to varying degrees: for Iraq, it helps secure its needs of electricity and construction supplies and to present itself as a mediator between Iran and Saudi Arabia. For Egypt, it will restore its role as a leading country in the region and to mobilize an Arab advowson to back its stance with Turkey and Ethiopia. For Jordan, it helps it keep its custodianship over the holy city of Jerusalem, to secure its position as a conduit for peace negotiations in the region (especially after the wave of normalization with Israel that swept the Gulf states and Morocco) and to achieve the two-state solution it calls for– which means the return of Palestinian refugees it shelters ever since the establishment of the Israeli state.

With an oil-rich country [Iraq], a country with the strongest armed forces in the Middle East [Egypt], and a country with a unique location that holds the keys of most of the region’s conflicts [Jordan], the nascent alliance could be a game-changer, overshadowing the GCC crack and the Iranian and Israeli interests that plagued the Middle East with chaos.