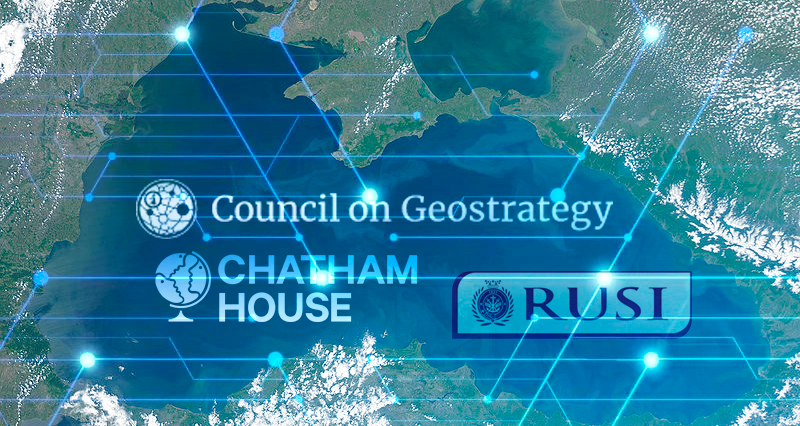 The Black Sea increasingly stands out as one of the global regions of tension. Following the colored revolution in the Ukraine and the cessation of Crimea to the Russian Federation, NATO has decided to increase its presence since 2014 in the Black Sea. The British government declared in its Integrated Review the Black Sea as one of the main field of raised military and political intervention.

Tensions reached a new peak with the British Navy vessel Defender entering Crimean coastal waters, a move that the Russian Federation evaluated as violation of territorial integrity and responded by firing warning shots at the vessel.

In the meantime, important and influential British Think Tanks discuss the events and strategies of Britain concerning the Black Sea.

The Council of Geostrategy, which among others carries in its Advisory Boars Andrew Bowie, Vice Chairman of the governing Conservative Party, asks the following question:

In an article published on July 8, the authors Richard Whitman and James Rogers compare the UK’s policy with that of the European, concluding “The British position on Russia therefore contrasts markedly with the approach of the French and German governments”, where the latter have positions which have “coalesced on the fantasy that relations with the Kremlin can be ‘normalised’”.

Indicating that the Biden administration may “accept tradeoffs in Eastern Europe in exchange for Russian support over the PRC” the authors conclude:

“The UK ought to prepare to ‘tilt’ further towards the Eastern Mediterranean and Black Sea region, as well as towards the Baltic, as the new pivot point of European security. Keeping Russia out and preventing other large European countries from inviting Russia in is the key to European peace in the twenty-first century.”

Another article by Mark Galeotti, published on June 14th, discusses the mission of the HMS Defender in the Black Sea – before the incident around Crimea occurred. According to Galeotti, the British destroyer – “powerful enough that it cannot be ignored, not enough to be a threat” – has an important mission:

“HMS Defender (…) is pushing back against Moscow’s efforts to position the UK as a marginal power. It is asserting Britain’s continued status as an independent, global actor. It is helping underwrite security in the Black Sea region alongside the US and – to a sadly lesser degree – the European Union (EU). Finally, by confronting Russian attempts to claim exclusive access to swathes of the Black Sea far from its legitimate territory, it is pushing back against the pernicious ‘lawfare’ that seeks to pervert international rules for national gain.”

The control and domination of the Black Sea

is what worries Maryna Vorotnyuk in her article published on June 24 by the Royal United Service Instıtute (RUSI). The Queen herself patronizes the RUSI, the Duke of Kent over it and several British government departments finance the institution. The RUSI also receives financial contribution from the Department of State, the government of Qatar and the European Commission.

Vorotnyuk denounces that the Russian Ministry of Defence has declared “several areas of the Black Sea closed to foreign military and other state-owned vessels until October 2021”. With the “militarization” of Crimea, “Russia has imposed unilateral control over the Black Sea and Sea of Azov and boosted its power projection capabilities in the Eastern Mediterranean”, states the author.

In summary, the author implicitly invites NATO to strengthen presence in the Black Sea in order to challenge Russian sovereignty over Crimea and the region.

Concerning the domination of the Black Sea and the Defender incident, the famous and influential

The Author, Keir Giles denounces in an article published June 24 the declining of the incident by the ministry, stating that “The credibility of the UK’s armed forces relies on honest and truthful reporting of their activities; pretending nothing is happening when it plainly is, is a habit that its defence ministry really should leave to the Russians”.

Giles adds that “The ‘innocent passage’ phrase “- the British excuse for the Defender’s course, “will be heard a lot over the next few days refers to the right to pass through another state’s territorial waters, no matter which state it may be.”

The Chatham House has already published a “Global Britain” report, targeting Russia besides of Turkey and China, and it has published another report titled “Myths and misconceptions in the debate on Russia” in May 13.

This report targets ideological arguments that favor a peaceful coexistence with Russia and those circles, which defend them.

Unsurprisingly, the report dedicates attention to Ukraine and the Black Sea, where “NATO security programs should be extended to”, “including forward presence in Bulgaria, Hunagry and Romania and new Enhanced Opportunities Programme for Ukraine”. (Page 11)

As the Council on Geostrategy, the Chatham House also criticizes the lack of “a substantial expansion of European sanctions in response to the Russian capture of three Ukrainian naval vessels at the entrance to the Sea of Azov in 2018”. (82)

The report also claims that Russia uses Crimea as “a base for military operations in Syria” and that there are signs that Soviet-era nuclear infrastructure is being restored” (82).

As a response, the Chatham House proposes besides of advancing NATO presence and the cooperation with Ukraine the strengthening of the sanctions regime and the inclusion of Ukraine into the EU’s PESCO scheme.

A similar criticism on the EU has been articulated by Nigel Gould-Davies from the International Institute of Strategic Studies (IISS) in an article titled “Europe urgently needs a geopolitical purpose”, published April 9.

Discussing the situation in Ukraine, the Nord Stream and the Sputnik vaccine, Gould-Davies concludes:

“Russia’s build-up of forces on its border with Ukraine is not only a challenge to Ukraine. It also marks the latest phase of a campaign of pressure on the EU. The weaknesses and contradictions of the EU’s response have emboldened Russia to pose a more severe test now. This is a dangerous moment for Europe and the transatlantic alliance.”

Hence, in this perspective, provocative policies in the Black Sea mount to a method of maintaining transatlantic unity against Eurasian adversaries.

The European continent may be “split from the Anglo-American world”

“The risk now is that a major Russian offensive against Ukraine splits the continent from the Anglo-American world”, wrote Gould-Davies during the Russian military mount up east of Ukraine.

In summary, British Think Tanks continue to consider the Black Sea as a major theater to pressure on Russia and acknowledge growing disagreement with the European Union, especially Germany and France.

The IISS also discusses in another report modern Russian missile systems and British response to them, highlighting “recent announcements from the United Kingdom regarding the transformation of its armed forces included plans to upgrade and increase stockpiles of the Sea Viper area air-defence missiles fitted to UK Type-45 destroyers”. The HMS Defender is such a type-45 destroyer.