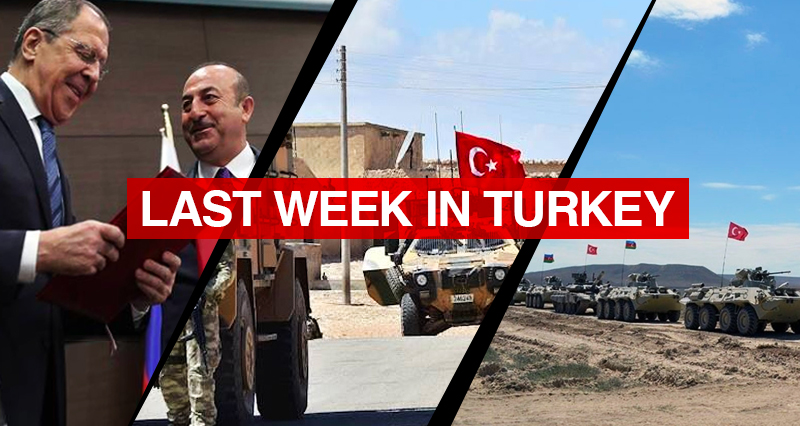 Last week, the public opinion in Turkey has been busy with three main topics.

First was the meeting between the Turkish Foreign Minister Mevlut Cavusoglu and his Russian counterpart Sergey Lavrov.

Second was the ongoing debate on sending additional troops for the security of the Kabul International Airport in Afghanistan, as the US and NATO troops withdraw from the region.

Third was the military exercise named “Anadolu 21”, conducted by Turkey, Azerbaijan, Albania, Uzbekistan, Pakistan and Qatar, with Kosovo and Mongolia participating as observers.

The Turkish and Russian foreign ministers met in Turkey on Wednesday and discussed the situation in the South Caucasus, Middle East, North Africa, Afghanistan, Ukraine, Central Asia, Eastern Mediterranean, and Black Sea regions, as well as Syria and Libya, according to a statement on Monday.

Turning to Syria, an issue on which Moscow and Ankara have worked for years, Cavusoglu said that Turkey would continue to work with Russia for peace and a political process for the war-battered country.

On Libya, Cavusoglu said that the North African country’s political unity and territorial integrity are priorities that both Turkey and Russia agree on.

“Our aim is to ensure stability, peace, and tranquility in all these countries. Particularly in Syria, we’ll continue to work with Russia for a political process, for the continuation of calm on the ground”, he said.​​​​​​​

On last fall’s military conflict between Armenia and Azerbaijan – which ended in November with a Russian-brokered cease-fire – Lavrov said: “Russia wants Armenians and Azerbaijanis to live as good neighbors and urges reconciliation.”

“We appreciate the activities of the joint command center (with Turkey) in Azerbaijan”, Lavrov added.

During a subsequent 44-day conflict that ended under a deal signed on November 10th, Azerbaijan liberated several cities and nearly 300 settlements and villages from Armenian occupation.

Cavusoglu underlined that Turkey has implemented the Montreux Agreement to the letter and has been faithful to the treaties it has signed.

Speaking to reporters in the Mediterranean resort city of Antalya, Lavrov said: “Russia is pleased to work with our Turkish colleagues on the implementation of the Montreux Agreement.”

Lavrov added that the canal’s construction would not prepare the ground for foreign military deployments.

Noting that Turkey has signed agreements to mutually recognize vaccine certifications with countries such as Greece, Bulgaria, Serbia, and Hungary, Cavusoglu said Ankara had proposed a similar deal with Russia.

Turkey has received 400,000 doses of Russia’s Sputnik V vaccine against the novel coronavirus; Cavusoglu added that institutions were working together on the joint production of this vaccine.

Citing a 20% fall in trade volume between the two countries last year, Cavusoglu noted that from January to April, trade had climbed 20%, compensating for 2020’s decline. He stressed that the two countries hope to raise the total to $100 billion per year.

Debates over deploying additional troops for the security of Kabul Airport

Contacts between Turkey and the US over the security of Kabul’s international airport after American withdrawal will continue, Turkey’s national defense minister said last Friday.

“No decision has been reached at the moment”, Hulusi Akar told reporters after his visit to Kyrgyzstan and Tajikistan.

“We will discuss the outcome of the talks at a meeting chaired by our president. And we will put the plan into effect after the president’s approval,” he said.

Reminding that the Turkish President Recep Tayyip Erdogan had underlined that certain conditions must be met for Turkish troops to stay for the airport in the Afghan capital, Akar said: “We said we can stay if these conditions are met.”

“In this regard, our contacts with several countries continue,” he said. “We continue contacts for some political decisions to be taken by the UN and NATO, to reach an agreement with the Afghan government, and for political, financial, and logistical support from certain countries.”

Turkey has also said that as the airport is an international concern, there must be foreign financial support for its security.

Stressing that Afghanistan is a “sister” country for Turkey, Akar said Turkey will continue to do whatever it can to ensure Afghans’ peace, stability, and security.

“The airport needs to be open and run. We are aware of this,” Akar said, adding that if Kabul airport doesn’t operate, Afghanistan would be left isolated.

The leader of the main opposition party (CHP), Kemal Kilicdaroglu has commented on the issue: “Our troops should not be left alone with Taliban in Kabul. Taliban has declared an ultimatum that they ‘don’t want NATO forces’. We cannot take over the police role for a place which America is withdrawing its troops from.”

Former Chief of Staff Intelligence Commander Lt. Gen. Ismail Hakki Pekin has posted a tweet thread on the issue, saying “As a part of the psychological warfare on this issue, an intense campaign is going on and it is being said that Turkey will get into a tough situation in Kabul. I have no doubt that the Turkish Armed Forces will successfully carry out this mission abroad. The potential advantages of this mission are questioned from time to time. This mission will increase Turkey’s importance and cooperation both in the region, in the eyes of Russia and China, and also in the eyes of the United States and NATO. To be clear, Turkey will not deploy troops there to fight the Taliban, but to maintain the operational status and the security of the Kabul International Airport, which provide the main connection of Afghanistan, our friend and sister country, to the outside world”.

Former Foreign Minister Hikmet Cetin said “Turkey has been providing the operational security of the airport within the framework of the NATO mission for the last six years. Therefore, if Turkey is to take the mission again, it must happen with the joint approval of the Taliban and the government in Kabul. There is a chaos dominating the country right now. The Taliban appear to be seriously dominating the region. Without the approval of Taliban, a serious security risk for Turkish troops is at hand, when it comes to take responsibility for the airport.”

The Anadolu-21 joint military exercise began on June 28th with the participation of Turkey, Albania, Azerbaijan, Qatar, Kazakhstan, Pakistan and Uzbekistan, and Kosovo and Mongolia as observers, according to the Ministry of National Defense’s social media account.

The exercise, hosted by the Special Forces Command of the General Staff, is aimed at improving friendship, cooperation and coordination between Special Forces elements, sharing mutual knowledge and experience, and improving their ability to carry out operations together.

The Air Force branch of the exercise “Anatolian Eagle 2021” was hosted by the Turkish Air Force and took place from June 21st to July 2nd in Konya Air Base.

According to the Defense Ministry, Pakistan will participate in this year’s exercise with 5 Chinese-Pakistani joint made JF-17 Thunder fighter jets and C-130 Transport Aircraft from the Black Panthers Fleet.

It is not yet known which planes Azerbaijan will bring to the exercise.