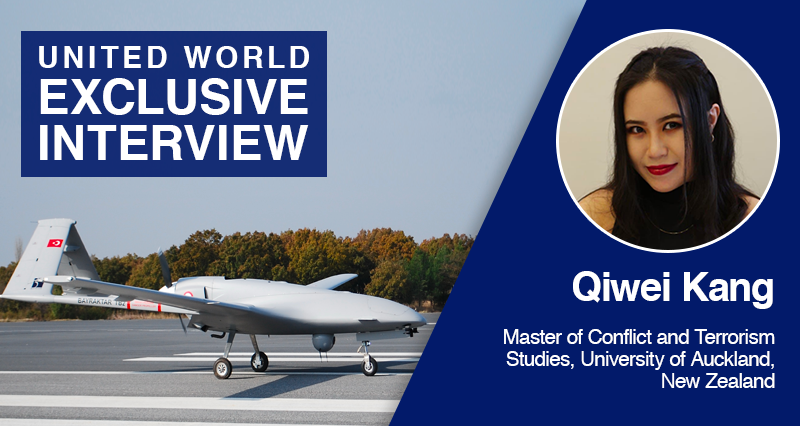 Turkey is building its influence abroad through the mass production of military drones, defence analysts say. The Bayraktar TB2 which is a main attack drone, has been used in Azerbaijan, Libya, Syria, Iraq, and against the PKK. Facts have proven that drones are also particularly useful in combating terrorist organizations.

Turkey’s low-cost unmanned aerial vehicle (UAV) has proven its on capabilities and is reshaping the battlefield and geopolitics.

Qiwei Kang Master student of Conflict and Terrorism Studies at the University of Auckland in New Zealand answered our the questions on Turkish UAVs and future warfare.

What are the basic details of the effectiveness of UAV?

Entering the 21st century, the deployment of UAV on the battlefield has introduced new ways of conducting war. Although often regarded as a novel technology, the usage and the concept of deploying UAVs in warfare has deep roots in history. The prototype of the UAV remains a debate, and the initial point of drone history is difficult to define. In more recent history, the U.K. deployment of the first “returned and reusable unmanned aerial vehicle for air and naval gunnery practice” in the 1930s (Keene, 2015, p2) is sometimes considered an important breakthrough. However, it is commonly acknowledged that the drone programs were developed during the two World Wars and later refined during the Cold War. In the War on Terror, the deployment of UAVs has been an essential tactic in countering terrorism. The recent usage of the Turkish UAVs in the real war environment might mark the beginning of the next stage of the “drone age”, where UAVs are used outside the War on Terror.

The most prominent feature of UAVs, as its name suggests, is the reduction of human actors on the battlefields. UAVs are relatively low cost; combined with their ability to be operated remotely, the deployment of UAVs would reduce causalities and human cost on the battlefields. In the case of the Turkish made Bayraktar TB2 drone, as a reconnaissance/attack UAV, the Bayraktar TB2 is 6.5m long with a wingspan of 12 meters, has an endurance of 27 hours and flight speed of 220 km/h, its maximum takeoff weight is 630 kg and the maximum mission payload of 55 kg. Bayraktar TB2 are not only useful in performing reconnaissance tasks and targeted killings – but also proved to be effective in taking out air defences, tanks and other technical equipment.

Can Turkey reshape the U.S. drone monopoly in NATO?

When we examine the global arms market, it’s clear that the U.S. monopoly is not limited to the armed drone market but also to the extent of the global arms market; just in the last five years, the U.S. has increased its global share of arms exports to 37%, and it still remains the largest arms exporter. However, when it comes to unmanned combat aerial vehicles (UCAVs), the U.S. is more cautious. Scholars Francesco F. Milan and Aniseh Bassiri Tabrizi (2020) have pointed out that U.S. policy on exporting armed drones has been strict, and the export of UCAVs is based on the ‘strong presumption of denial’ rule, which means the U.S. “refuses requests of UCAVs procurement unless it has a substantive degree of certainty the platforms will not be used against its interest” (p.731-732). This has resulted in only three NATO members: United Kingdom, France, and Italy possessing U.S. UCAVs in their inventories in 2020.

The Turkish Bayraktar TB2 armed drones have been attracting attention intentionally in recent years; Libya, Qatar, Ukraine, and Azerbaijan have all purchased Bayraktar TB2 armed drones in the past. On May 24th this year, during Poland’s President Andrzej Duda’s state visit to Ankara, a deal was signed between the Head of the Polish Ministry of Defence, Mariusz Błaszczak, and Baykar CEO Haluk Bayraktar, which enables Poland to purchase 24 armed Bayraktar TB2 drones from Turkey. Therefore, Poland’s recent purchase is significant as it marks the recognition that Turkey’s armed drones have been receiving within NATO. As other analysts have pointed out, Poland’s latest agreement with Turkey paves the way for other NATO members to purchase Turkish armed drones in the near future. At the same time, with a NATO member purchasing UAVs from Turkey, this could also attract other potential buyers from Asia and Africa. Compared to U.S. UAVs, the Turkish UAVs entered the theatre relatively late; however, they have grown into a key player in the global arms market over the last few years. By 2019, Bayraktar TB2s have accumulated more than 100,000 operational flight hours. During the 2020 Nagorno-Karabakh war, Bayraktar TB2 has attracted attention internationally as it has proven useful in targeted killing and taking out the air defences. It has also opened up the potential of using drone swarm in conducting war.

In the past two years, the U.S has claimed to loosen its policy in exporting UCAVs, yet, such a claim has not been materialised largely. Although it might be too early to say that Turkey can break the U.S. monopoly in NATO, Turkey definitely challenges the U.S. drone monopoly in NATO, and more importantly, challenges how wars are being conducted.

If the Turkish UAV market becomes larger in the future, how will it affect US UAV deployment?

The U.S. deployment of UAV in the War on Terror has brought this piece of technology to the public. For the U.S., the deployment of UAVs has fundamentally reduced the battlefield to the local population and individuals; at the same time, it served to expanding the geographical boundaries of the battlefield, in which the enemy’s “body becomes the battlefield” and “the whole world becomes a hunting ground”, as philosopher Grégoire Chamayou has said in his work Drone Theory. This is due to the nature of terrorist organisations, as they are not coherent political entities but rather a network with key individuals being the ‘nodes’ embedded. Yet, despite being an important tactic in countering terrorism, the U.S. deployment of UAV is primarily seen in its targeted killing program, in which the UAV only serves a “supporting role” with an emphasis on its precision. In many cases, the UAV such as the Predator serves to provide full-motion video, along with surveillance and reconnaissance tasks; sometimes, the actual strikes might not even be carried out by the UAVs. In this sense, the current U.S. deployment of UAVs is largely limited in the War on Terror, which is different from a traditional battlefield.

If the Turkish market continues to grow, it might affect the US deployment

Turning back to the Turkish UAVs, they have proven to be critical players in the recent 2020 Nagorno-Karabakh war. UAVs such as Bayraktar TB2 have not only fulfilled their role in monitoring the battlefield but are highly effective in targeting and destroying tanks, mortar lines, radar installations and air defence systems. It is also the first time where the drone swarms were used on a modern battlefield. According to various reports, Azerbaijan has employed UAVs in carrying out more than 75% of strikes, resulting in around 40% of Armenian technical equipment being destroyed and thousands of casualties caused during this recent clash. Among the UAVs used in the 2020 Nagorno-Karabakh war, the Bayraktar TB2 was among the main force. It can be observed that UAVs such as Bayraktar TB2 are not limited to the targeted killing program where the end goal is often eliminating key individuals – but are adjusted for mass operation in the real war environment. If the Turkish UAV market continues to grow in the future, it could affect the U.S. deployment of UAV as the recent usage of the Bayraktar TB2 has challenged the U.S. “manhunt model” applied in the War on Terror. Within the U.S. troop’s recent withdrawal in Afghanistan, the U.S. UAV program might face changes, too. Perhaps in the future, the targets of UAV would no longer be limited to individuals and start to engage in the battlefield in a more direct means.

In my opinion, Turkish drones would change the future of battles in the following ways: we could witness a rise of drones in the modern battlefields, with its role not just limited to targeted killing program but also in taking down air defence and other technical equipment, causing larger casualties; it is also likely to see a rise in the use of drone swarms in the future battlefields, the relatively low cost of Turkish drones might help to materialise such use.

When talking about the deployment of UAVs, it is vital for us to think beyond the technology to see UAVs as a system. To successfully operate an armed drone requires both physical and social infrastructures. While the future of battles would be altered by drones, and it is highly likely to witness a rise of Turkish drones in the global arms market, we also need to update the current legal framework in facing the moral concerns that come with such deployment. Therefore, the Turkish drones would change the future of battles as they challenge both the physical and social infrastructure, urging leaders worldwide to upgrade both the physical networks that enable the operation of drones and the current legal framework in matching with the rapid progress in technology.

Lethal and legal? the ethics of drone strikes by Shima D. Keene

Armed, unmanned, and in high demand: the drivers behind combat drones proliferation in the Middle East, Francesco F. Milan and Aniseh Bassiri Tabrizi

Drone Effectiveness Against Air Defenses, Not Tanks, Is the Real Concern https://www.thedefensepost.com/2020/12/07/drone-effectiveness-air-defense/

2 responses to “Turkish drones change the future of warfare”