Failure of the UN Mission in the Central African Republic 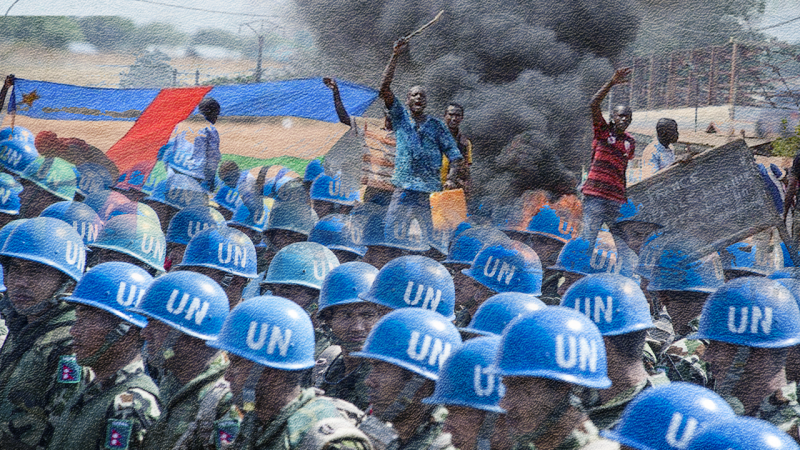 The UN Independent Expert on the human rights situation in the Central African Republic (CAR), Marie-Therese Keita-Bocoum has expressed harsh criticism against the UN Mission in the country, MINUSCA (Mission multidimensionnelle intégrée des Nations unies pour la stabilisation en Centrafrique), in the last days. In spite of having been established in the country 7 years ago, the UN Mission has not yielded any considerable success, the UN expert stated.

“The MINUSCA forces did not intervene when civilians were in danger, which resulted in numerous casualties and caused frustration among the population. Thousands of people have protested in a number of provinces and have brought complaints against MINUSCA”

As an example, the UN expert points to the events that took place in the city of Bouar in proximity of the UN military base. Militants have attacked the population of the city since January 2021, and the violence has only stopped when troops of the CAR army have taken over control of the city. The UN Peace Force was either not capable or not willing to protect the civilian population.

The people in the CAR have protested against the UN Peace Force. Other African countries witnessed similar processes and protests. For instance, hundreds of young people protested for several days in the Democratic Republic of Congo’s cities Beni and Goma in April 2021. They demanded the UN peace force, the MONUSCO, to leave the country, claiming that it was incapable to stop the bloodshed.

The former president, Francois Bozize attempted a coup right on the eve of elections in the CAR December 2020.  He made use of the covered support of France, which at that time was intending to strengthen its position in its former colony. Bozize and the radical groups made an alliance: Coalition of Patriots for Change (CPC). The coalition attacked the capital city Bangui, but was repelled by the army of the CAR, which had been trained by Russian military experts. A unit comprised of Rwandan soldiers also provided important support in the struggle against the militants.

The UN peace force has not protected the civilian population at that time. The UN expert Keita-Bocoum described this situation with the words “In the immediate vicinity of the Mission and practically before the eyes of the troops, CPC militants harass the population, rape women, and steal property.”

Senseless raise in numbers of presence

In summary, the UN peace force has not played any effective role in the struggle against the armed militants. In spite of that, on March 12, 2021, the UN Security Council decided to raise the personnel numbers of the MINUSCA force, adding 2750 soldiers and 940 police officers to the mission force.

It is very doubtful that the raise in personnel in the MUNISCA mission will provide any further contribution to achieving stability in the CAR. The problem is, that the UN forces have a very limited competence. They are not permitted to intervene in any skirmish or provide support for a side in the conflict. According to international law, the UN peace force is not a combat power. But in a situation, where gangs are fighting a war against the legitimate government, “impartiality” means generally covered support for the gangs. The UN mission’s format limits its abilities to fight against terror. A raise in personnel numbers will not solve problem under these circumstances.

Besides, these conditions may also create negative consequences for those countries that will contribute to the peace force. The foreign policy image of the force contributing countries will be affected negatively by the fact that the UN peace force’s format won’t be able to cope with the threat to the CAR’s national security.

The UN is criticized every day more and more because of its rising bureaucratization and ineffectiveness in responding to current global challenges. As will be remembered, just recently the Turkish President Recep Tayyip Erdoğan commented on the structure of the UN Security Council with the words that “such a structure cannot provide justice for all the world”. More importantly, Erdoğan made this statement in a joint press conference with his Ugandan counterpart, Yoweri Museveni.

The UN peace force has displayed its ineffectiveness in other armed conflicts too: in the Bosnian War and in the conflict over the Golan Heights on the border of Syria and Israel. But the “Blue Helmets” are criticized in Africa far more harshly for their lack of protection to civilian population, and even for having committed war crimes.

According to Mozambique’s former First Lady Graça Machel, there has been a steep rise in child prostitution in the country since the peace force has arrived in the 1990s. Accusations that peace force members were involved in rape or human trafficking are widely and frequently articulated in all regions they are deployed to. In 2017, the news agency Associated Press published a report on the UN peace force’s soldiers’ and personnel’s involvement in sexual attacks. According to the report’s data, UN peace force members have committed during 12 years around 2 thousand acts of sexual harassment.

Meanwhile, a scandal broke out in the CAR in 2015. The British newspaper The Guardian reported, citing a UN report, that French soldiers of the UN peace force were involved in acts of child abuse and child exploitation in refugee camps. The report contains accusations such as rape, violence and pederasty. The Guardians reports that the victims were between 9 and 13 years old. The French were in the CAR as part of the Operation Sangaris. The UN Security Council had authorized them in December 2013.

The UN has never stopped the French atrocities. Besides, the Human Rights Watch (HRW) has also accused MINUSCA members of having committed similar crimes.

The UN peace force frequently poses a threat to the civilian population. It is also incapable of stopping those imperialist powers, which come and pursue activities in these countries, often claiming to “protect the peace”. The rapist French peace force soldiers in the CAR are a proof of this. The French soldiers are deployed usually with approval of the UNSC to Africa, but they serve polices forces to continue the neo-colonial presence of Paris in this region.

It is worth reminding that the first armed conflict, in which the UN took part as peace force was the Korean War, where the peace force was actually provided by a coalition constructed by the US.

Turkey has back then participated in this coalition and provided forces. 800 Turkish soldiers lost their lives, and the same number was injured.

From “peace protection” to security export

The UN peace forces’ failures in the CAR and other countries of the world display the need for reform in the UN. This reform needs to tackle not just the inner bureaucracy of the UN. We are not talking of a reform that benefits the UN bureaucracy or the imperialist states. What is needed is a total reform of the UN institutions and its mechanisms serving the interests of all the people of the world.

At the same time, the dominant countries face a higher number of threats. The US and its allies, which are governed by the doctrine of ‘Controlled Chaos’, are creating regions of tension and targeting their adversaries by using gangs and terrorists.

It appears that, under these circumstances, the current format of the UN peace forces will not solve any problem.

Countries, whose armies have a low moral and professional education, take actively part in UN peace force operations. There is only one reason why these armies are sent to regions of armed conflict: money. These soldiers are practically used by their governments as modern mercenaries rented to the UN. Peace force soldiers from countries such as Bangladesh, Fiji or Nepal, or their governments are not to be expected to oppose American or French agents in Africa. The situation in the CAR proves that. These countries cannot oppose Washington or Paris. But China, Russia or Turkey can.

Therefore, if we take a look at those conflicts in the last years that were solved successfully, we do not see UN peace force presence but the correct choice of allies between dominant powers. For instance, the Government of National Accord has organized Turkish military support, thus stopped Haftar’s attack on Tripoli, which in turn has enabled the current peace process.

The leadership of the CAR has decided to seek help from Ruanda, which is a leading country in the region, and from Russia. This strategy has proven itself, and the main force of the militants was defeated without involvement of the UN peace forces.

Additionally, Turkey is present in the region. Turkish companies operate in the airport of Bangui. The MINUSCA’s incapability will lead the CAR to seek new, additional allies for those regions, where the Russians and Rwandans are not capable to act. Turkey can offer sophisticated military technology to the CAR and other African countries, especially drones and contributions to problem solving. As a main actor in establishing regional security in Africa, Ankara can at one place compete and at the other cooperate with countries such as China and Russia, just as its geopolitical interests make necessary.

Ankara needs at least to be prepared to these new circumstances where the confidence in UN peace forces is diminishing, while the dominant centers of power increasing demand the export of security.