Johnson vs. Biden: The Empire Strikes Back… 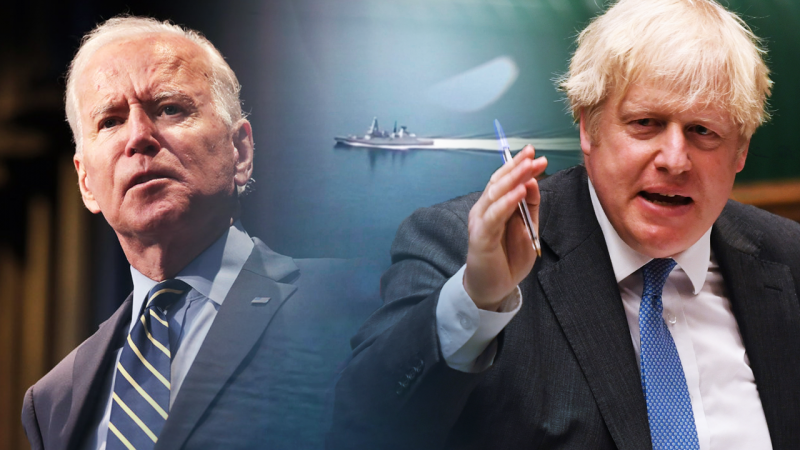 I was writing an article commenting on the recent Biden – Putin meeting in Geneva, which I consider a first – even if it remains very fragile – victory in the struggle of humanity to confront the terrible threats to its own existence, when I heard the news about the incident between the British and the Russian Navy in the Black Sea.

Things are moving so quickly these days you don’t have the time to write about one event before some new episode comes.

Russia has announced it has used live ammunition to drive a British warship out of its territorial waters in the Black Sea. The incident took place on the eve of the giant Sea Breeze exercises of Ukraine and NATO in the Black Sea.

Britain claims no live ammunition was fired and its ship was outside Russian territorial waters. We have no independent way of determining what happened. But we do have an independent way to know that, for centuries, lies are the most perfect weapon of the British Empire, being the world champion regarding this sport. In fact, when the Americans needed to construct the story with Saddam’s “weapons of mass destruction” in Iraq, they did not go through it on their own and resorted to Tony Blair and the British secret services to help them!

The day before the incident in the Black Sea and just a few days after Biden tried to de-escalate tension with Russia, the British also signed a huge agreement to modernise the Ukrainian navy that will cost the extremely impoverished Ukrainians a few billion. The only mission in which this navy could serve is a war against Russia, the first victim of which will be the Ukraine itself! Winston Churchill once put it like that: “We will fight against the Germans to the last blood clot οf the Indians.”

Without claiming that we will get there in the case of the Ukraine, it is worth remembering how the war against Libya took place, although Obama, according to his own statement, did not want it.

The Neocons, who were in some difficulty in Washington, acted through France and Britain, taking advantage of the decisive influence of Israel – run by the patriarch of neoconservatism  Benjamin Netanyahu – on President Sarkozy (so great that the French President had decided upon his election to appoint Hubert Védrine as Minister of Foreign Affairs; but he was unable to implement his decision because the Jewish organisations in France had vetoed his decision, claiming Védrine had pro-Palestinian views). In such conditions, Bernard Henri Levy persuaded the president in 2011 to launch the campaign against Libya with the help of Britain, and Victoria Nuland and Hillary Clinton undertook the task to “short-circuit” the US president.

The Chaos and War International

Let us note at this point that Boris Johnson is no ordinary British Tory politician. He is a select member of the Far Right “Chaos and War International” (Bannon, Pompeo, Netanyahu, Modi, Bolsonaro, etc.). He has cast aside, in producing his policies, all the traditional think tanks of the British Conservative Party for the benefit of the most extremist, far-right, neoliberal, neoconservative, pro-Israel, anti-ecological and pro-war (followers also of the herd immunity theory) US and international think tanks.

That is why we think that, in the case of the British activities in the Black sea and with Ukraine, we are probably facing another manifestation of the “civil war” that is taking place inside the centre of the world power, that is, the Empire of world financial capital itself, between “normal”, on the one hand, and pro-war, extremist imperialists. This war manifests itself in a horizontal and often misleading way in all Western (and not only Western) states.

Today we have come to the point where it does not make probably much sense to ask which politician or which party won the election. The right questions are maybe “Rockefeller or Rothschild?”, “JPMorgan or Goldman Sachs?”

After all, what we mentioned above is not the only indication that a civil war is taking place inside the western establishment. We can also mention the attack on Biden by the Gatestone Institute, a far-right bastion of neoconservatism, for his politics towards both Russia and China, under the characteristic title: “Biden never learns. He still wants to talk to China”.

Or see the position the US Secretary of Defense and the chief of staff took, saying that China does not have the possibility in the near future to occupy Taiwan, just two days after two US Admirals of the Pacific Fleet claimed the opposite.

Or Blinken’s twist from CBS to roughly declare war on China, The Washington Post’s previous attacks on Biden for not calling the desperate Zelensky, etc.

Similar signs, that is, of pressure on Biden to be more “decisive” towards Russia, we had the whole spring. As we had Mr. Zelensky, who suddenly found the very unusual courage to criticise the US president for seeing Putin before seeing him and for not putting Ukraine into NATO. After all it was Mr Zelensky who started the recent crisis around Ukraine, when he “reinterpreted” (while Trump was still the President) the Minsk agreements, last October, proposing that the Ukrainian army return to Donbass (along with the Israeli-equipped neo-Nazi militias that it has integrated into its ranks), close the borders with Russia and then see what happens! It was also Zelensky who raised the question of retaking Crimea, which practically means a Third World War.

It is impossible that Mr. Zelensky took these initiatives on his own. And as it seems, it was not from the Biden administration that he received the necessary encouragement, but from a powerful alternative centre of power and influence inside the Western establishment.