International Conference on Libya in Berlin 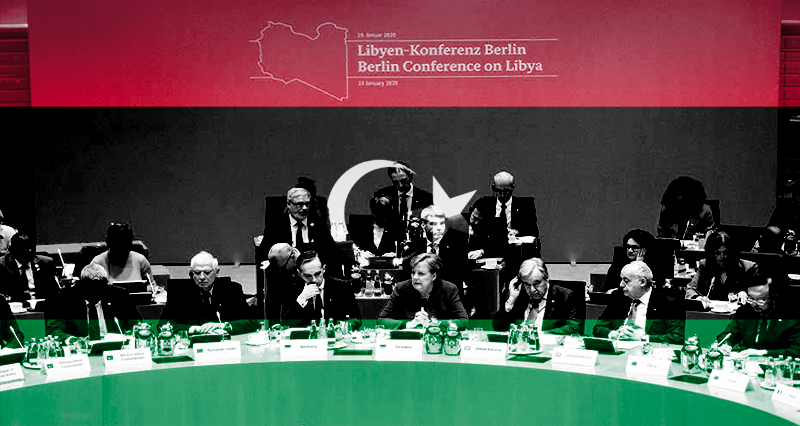 The international conference on Libya under auspices of the UN and convened by Germany, is gathering to its second meeting in Berlin on June 23rd. In difference to the first conference from January 2020, representatives from the Libyan Government of National Unity will also take part.

International participants will be the same as the in the first conference, from the US, France, Italy, UK to Russia, Turkey, China, Egypt, Algeria, the UAE and Congo as well as representatives of the United Nations, the European Union and the Arab League. US Secretary of State Antony Blinken will attend the conference as well as the Turkish Foreign Minister Mevlüt Çavuşoğlu.

The German Foreign Ministry has announced that the conference will discuss two items:

1. The implementation of the political road map approved by the Libyan Political Dialogue Forum (LPDF) towards the national elections on December 24th, 2021;

2. The implementation of the ceasefire agreement from October 2020, including the withdrawal of foreign fighters and mercenaries.

Will elections take place on time?

In continuation of the first conferences conclusions, the UN Security Council has called in its Resolution 2570 the Libyan parties and especially the House of Representatives “to clarify the constitutional basis for elections and the enactment of legislation, as necessary, by 1 July 2021”.

But the House of Representatives has not agreed yet on a new election law. Among the disputed issues is the question, whether the parliament or the people directly should elect the future President of State.

The US Special Envoy for Libya, Richard Norland declared ahead of the conference “There needs to be a constitutional basis and a legal framework established, approved by either the parliament or by the LPDF, the Libyan Political Dialogue Forum, basically in July, according to the election commission, in order for the elections to take place in December.”

The UN Special Envoy of the Secretary-General for Libya, and Head of the United Nations Support Mission in Libya (UNSMIL) Ján Kubiš, has ahead of the conference also emphasized the importance of holding the elections on time and pursued preparatory meetings with Russian, Turkish and Maltese government representatives beginning of June.

German Foreign Minister Heiko Maas has reacted o rumors that the transitional government may decide not to hold the election slated for December — somewhat problematic, since the topic is one of the main pillars of the conference.

But on Monday, Germany’s foreign minister told the newspaper Die Welt that he had addressed this in a conversation with Dbeibah. “He assured me that they are working very intensively on the preparation of the elections,” said Maas.

The issue of foreign fighters

A second issue on the conferences agenda is the presence of foreign fighters and mercenaries in Libya. US Envoy Norland stated his country would like to see “progress on forming a joint military command, so that these various Libyan armed elements come under one hat, to achieve the withdrawal of foreign forces”. Norland added “negotiations underway with some of the key actors aimed at trying to remove some of the mercenaries, the foreign fighters.”

Western countries especially focus on the claimed presence of Russian Wagner mercenaries and Turkish military units in Libya, demanding their withdrawal. Turkey rejects these calls, stating that its presence in Libya is based on a bilateral agreement with the UN-recognized Libyan government.

Turkish and Russian government representatives met ahead of the conference in Moscow.

The German Foreign Minister stated ahead of the conference that “the question of withdrawal isn’t a matter of if, but rather when and how. The foreign forces must leave the country gradually and in an orderly manner in order to avoid creating a sudden military imbalance that one side could exploit for a sudden offensive.”

The delegation met President Mohammed al-Manfi and the Members Abdullah Hussein al-Lafi and Musa al-Koni of the Presidential Council of Libya and Prime Minister Dbeibeh.

During visit, Turkish Foreign Minister rejected the qualification of Turkish troops in Libya as “foreign forces”.

Meanwhile, the Libyan Foreign Minister Najla Mangoush has announced to present a “Libya Stability Initiative” in Berlin, which her government has been working on since three months. “This initiative will establish an international working group headed by Libyans. The group will convene periodically at the level of foreign ministers” she said, aiming to better unify the Libyan army under one command.

Still, events in Libya itself do not promise a fast progress. The UN had mediated an agreement between the Western and Eastern parts of Libya to open the coastal road of Sirte as a confidence building measure.

But the 5+5 Joint Military Command, consisting of representatives of both sides, has postponed the opening of the road, reports local media “until damages on the road are fixed”. The postponing clearly contradicts the PM Dbeibah’s announcement o successful opening.

Meanwhile, General Khalifa Haftare, the self proclaimed commander of the Libyan National Army, continues making military moves. Local media reports that Haftar has taken over a border crossing to Algeria and started a military offensive against “Takfiri terrorists” in the south of Libya.

LPDF will meet in Switzerland following the conference

The UN Mission to Libya meanwhile has announced that the Libyan Political Dialogue Forum, which is unites the two domestic sides of the conflict, will convene in Switzerland between June 28th and July 1st.