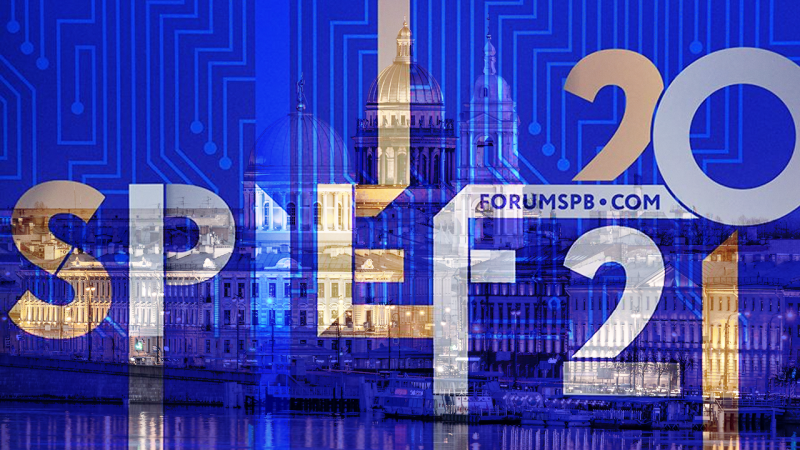 The St. Petersburg International Economic Forum took place June 2 – 5, 2021. The forum was the largest event on economics in the post-pandemic world. 13,500 participants from 141 countries attended the forum. 43 ministers from foreign nations, 93 diplomats (84 of which were top ambassadors) participated alongside 9 Russian Deputy Prime Ministers and 6 Ministers. 5,000 of the total participants were the representatives from both Russian and foreign companies, while 1,500 of these were senior executives. More than 1,000 media outlets from a total of 46 countries were present in the forum.

Guest Country of the Forum: Qatar

Turkish Ambassador to Russia, Mehmet Samsar has also attended the forum, while the Vatan Party was invited to take part in this international forum as well.

The African cry for a vaccine

More than 190 separate events were held as parts of the forum, where 1,300 Russian and foreign guests have held speeches. The speakers of the opening session were the Russian First Deputy Prime Minister Andrey Belousov, Qatari Minister of Commerce and Industry Ali bin Ahmed Al Kuwari, and the Rwandan Prime Minister Édouard Ngirente. The President of the Democratic Republic of Congo Félix Tshisekedi, the President of the World Bank Group David Malpass, and the member of the Communist Party of Vietnam Central Committee Politburo and Head of the CVP’s Economic Committee Tran Tuan Anh, have joined the opening session via a video conference.

The Qatari Minister Al Kuwari stated that the world would never be the same as it was before the pandemic, and a new world is now being built. And while the representatives from African countries emphasized the inequalities in vaccine supplies, they also underlined that if Africa keeps being ignored in vaccination, the world might never overcome this pandemic. And according to the Prime Minister of Rwanda, egoism should be replaced by a sense of sharing. The official from the Communist Party of Vietnam has noted that they were one of the few countries which managed an economic growth in the midst of a pandemic. Russian First Deputy Prime Minister Belousov answered the question whether ” Russia is turning to the east?” with the answer, “It always has been”, while noting that “you can look at the Russian coat of arms” referring to the double-headed eagle.

“Sanction policies have become a pandemic”

A separate session was held during the forum titled “The risks which sanctions pose for the global financial system” on the unilateral sanctions by the United States and the Western countries, a topic frequently discussed on the forum. Speakers have generally agreed that these sanctions violated the international law, being used by the United States as a weapon. Russia’s Permanent Representative to the EU, Vladimir Chizhov, said that the sanctions had started as an epidemic and turned into a pandemic, targeting and hitting firstly the people. The quest for an alternative to US Dollars as a reserve currency and to the SWIFT system were also highlighted during the session.

The continuing era of hydrocarbon energy

In sessions related to the energy issues, experts have said that the global energy supply will be primarily based on hydrocarbons until 2050, with an estimated share of at least 71 percent. According to experts, the age of petroleum oil and natural gas will not end in the near future, and countries with conventional energy sources will retain their roles for a while.

The importance of new generation vaccines

Naturally, the development and the global transformation of the healthcare sector in context of the COVID-19 pandemic and its consequences was one of the primary topics of discussion on the forum. The experts elaborated on topics that are related to the resilience of industry against in times of emergency, the possibilities of introducing new treatment methods, the development of groundbreaking technologies in the field of genetics and the digitalization of the healthcare industry. The need for investigating effective and safe next-generation vaccines was emphasized as the most reliable tool for the prevention of life-threatening infections. More than 300 top government officials, leading experts in the healthcare and scientific industries, representatives from the businesses and NGOs, were all invited to the forum to discuss the current health crises as speakers, experts or moderators.

The sessions related to the Arctic region focused mainly on improving the maritime transportation, financing of the investment projects, strengthening the telecommunications infrastructure, and the increase for the social and environmental responsibilities by the large businesses.

The economic policies of the Stalin era

The book was essentially written in order to better understand the reasons for the extraordinary growth of the economy during the Stalin era of the USSR between 1929 and 1955, as the authors of the book describe. This research, which was written using the first-hand sources and confidential archive documents, examines the solutions of the record-breaking economic growth, a growth unreached by any other nation so far, and whether these solutions are still suitable for today’s sense.

The African interest for Russia

Another point that stood out at the forum was the high participation numbers from the African countries. A total of thirty-two African countries have sent delegations to this international event in St. Petersburg, on the highest level. The Russia-Africa Economic Forum had been held at Sochi October 23-24, 2019. This event, which was held for the first time, gained much attention throughout the Black Continent, and Russia has given the signs for its return to Africa after 30 years. And the St. Petersburg Economic Forum has also confirmed this trend again.

The forum also had a session special for Africa. Speakers at the session “Russia-Africa” included the Russian Deputy Foreign Minister and Putin’s Special Envoy for the Middle East and Africa Mikhail Bogdanov, Prime Minister of the Central African Republic Firmin Ngrebada, Rwandan Prime Minister Édouard Ngirente and Egyptian Minister of International Cooperation Rania al-Mashat. In the face of new destabilization moves of the West, especially in North Africa and in the Sahel region, it was clearly shown that Russia will also play an active role in the region, both militarily and economically. From the overall atmosphere of the forum, it was clearly seen that Africa was turning towards Russia against the neo-colonialism.

There is no doubt that the most important event of the forum was the session that was attended by Vladimir Putin, which has taken place on June 4th. The Qatari Emir Sheikh Tamim bin Hamad Al Thani and the Austrian Chancellor Sebastian Kurz have also taken part in the session via video conference. Video messages from the Argentine President Alberto Fernández and the Brazilian President Jair Bolsonaro also came during the session.

Putin devoted most of his speech to the domestic economical issues during the pandemic. He especially underlined supporting small and medium size businesses in particular. And according to Putin, it was quite normal for the state to intervene in the economy increasingly during such times of global crises.

Unexpectedly, the Russian President also discussed in his speech in detail the global warming and counter-measures. He stressed that the perception that Russia was ignorant on this issue, did not reflect the reality at all.

During his presentation before the Q&A part, the Russian President almost never got into the issues of international politics.

The Emir of Qatar began his speech with an anecdote on Leningrad’s (St. Petersburg today) heroic resistance against the German fascism. He expressed his gratitude for development of bilateral relations with Russia. He also pointed to the role of Russia in eradication of the global pandemic. The issue of unfair distribution of the vaccine around the world has also taken place in the speech of the Qatari Emir.

The Austrian Chancellor Kurz said they were looking forward the EU to accept the Russian Sputnik V vaccine as soon as possible, and to use the Russian vaccine on behalf of his own country. Putin said that the politicization of the vaccines would harm the peoples of Europe first.

Criticism on capitalism from Argentina

The video message from the Argentine President Fernández had ended with the following:

“Capitalism that we are used to from the times before the pandemic has not worked, it has generated inequality and injustice. And if we are going to build another form of capitalism, it has to be a capitalism that does not forget the concept of solidarity. If the pandemic has taught us anything, it is that nobody can save themselves alone and that there are moments where the most powerful and the weakest tremble and fall in the face of the virus.”

The most heated moments of the main session of the forum occurred when the NordStream-2 pipeline project was discussed. When Putin has officially announced to the world that the first line of the project had been completed, applause shook the conference room. This announcement has also caused the Russian Ruble to gain value against the USD. The Austrian Chancellor Kurz has also clearly shown his support for NordStream-2 project. However, whenever he was asked a question that might have led to an answer conflicting the US, he repeatedly said “we are a small country”, searching for escaping formulations. This happened five times in total. Putin on the other hand, stressed that the NordStream-2 project is a only an economic project that does not aim to bypass any other countries, by referring to Ukraine, and that it provides a much cheaper, safer and a cleaner energy to Europe compared to the other options.

When asked by the moderator, why Russia was selling its gas in US dollars to Europe in the NordStream-2 project and bringing a third power to the trade, Putin said that dollar’s use as a political tool would severely damage the dollar and that many countries, including the allies of the US, are reducing their dollar reserves by each day. While noting that petroleum oil is sold in dollars on the global exchange market and that natural gas is not a stock market commodity, the Russian President also stated that they are ready to sell their gas in Euros via NordStream-2.

Intense attention on the Forum

After a one-year pause to the St. Petersburg Economic Forum, which I attended in 2019, I observed a very high attention to the forum despite the pandemic conditions of this year. The participation was above the expectations, given that Russia’s borders with many countries are still closed or flights are still restricted. The intense attention paid to the forum had proven that all the nations are in a look for a way to revive their economies, which had been severely stagnated by the pandemic.

The St. Petersburg International Economic Forum shows that the US sanctions are not working well as a weapon, and that its policy of isolating the targeted countries, has horribly failed. The US Embassy in Moscow has officially refused to attend the forum, but the American delegations of businesspeople were the second largest after Qatar, the guest country of the forum. Aside from the participation from other countries, Washington did not even manage to put its authority on its own business communities either. And the announcement of a line of North Stream-2 had been completed, clearly shown that the US threats of sanctions against this project were failing and that even its own allies in Europe did not comply against these threats.

The major participation of the Qatar in the forum, as well as the statements by their state officials have also proven the shift of axis in the country.

The St. Petersburg Economic Forum had been a key signs of the global economy shifting from the Atlantic, and to the Pacific.