Turkish views on the Palestinian issue 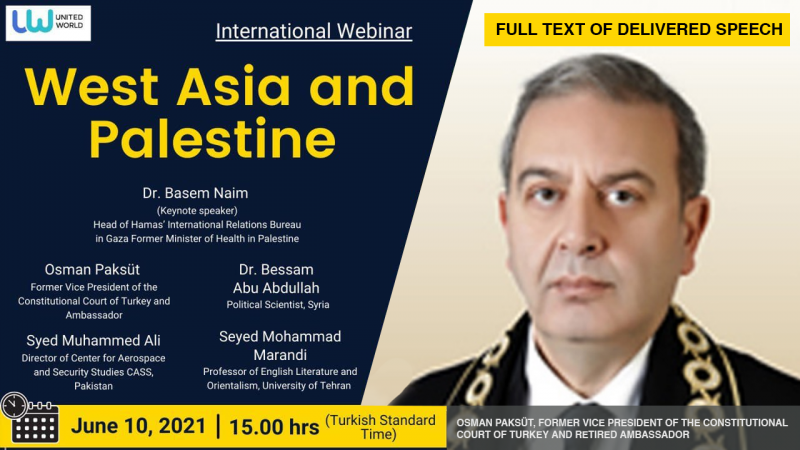 We will present the full text of the speeches held on the webinar in the coming days. Today we present the speech of Osman Paksüt, former Vice President of the Constiutional Court of Turkey and retired Ambassador.

The speech is presented as delivered. Subheadings were set by UWI. The full video of the webinar can be watched in the link below.

Thank you Mr. Soner and I thank you United World International for organizing this Webinar.

My name is Osman Paksüt, former Ambassador of Turkey, former Vice President of the Constitutional Court. I join this meeting on completely by my own behalf but of course many of my views also reflect the vast majority of Turkish people.

We have heard interesting presentation by Dr. Basem Naim. Of course we are aware of the situation and we all know that this is a complicated issue. I will try to address this problem and trying to guess what will happen in the coming decades so that we can understand the Israeli and the Palestine question in a broader strategic and historical concept.

The rest of the area was rather stable and all the political positions of the neighboring countries and the big/key actors, the superpowers were well known, but today we have a very very complicated and more dangerous situation in the region that before. Not only continues the Israeli occupation, but also the political independence and territorial integrity of other countries in the region are brought into question. They have come almost a point of dismantling.

Iraq for instance came at the edge of being dismantled after the US occupation, where 1 and a half million lost their lives. Another key country in the region, Syria, is under the threat of being dismantled. We in Turkey very unhappy the idea that is going on in the east of the Euphrates where the US is trying to create a pseudo country so called Kurdish state which will be mainly composed of terrorist organization PKK under the name of PYD/YPG. Turkey is fighting for the prevention of this pseudo country which will be a source of instability and the danger for the rest of this century in this region.

“US creates chaos and disorder in West Asia”

Now what’s this all this has to do with the question of Palestine? The solution of the Palestinian question is difficult because of the grand design of the United States on this region. As long as the US does not give up on its plans to create chaos and disorder in West Asia, and its attempts to create new fortresses and allies in addition to Israel, and to encircle Eurasia, that is Russia and others from the Eastern Mediterranean, these problems will not disappear. The problem is that the United States seems will not give up this strategy into the 21st century and instead of working for the peaceful solution to bring the stability to the region, they will continue to support Israel and other entities which the US considers allies.

Therefore the problem is twofold. First, as Dr. Naim described the situation, there is no unity within the Palestinians and that’s a big problem, because in order to win a war of independence and to survive as a people, the unity of the national front is essential. We know the War of Independence of Turkey itself in 1919-1922. Our founder Mustafa Kemal Atatürk in those years said in order to win our independence we must be unified within the domestic front. So the question of the unified Palestine is very important and of course Turkey, like other friends of Palestine, will do whatever is in its capacity to achieve this unity.

The question is again Israeli aggression and its strategy to enlarge its territories must be addressed somehow, because since the outbreak of this problem in the last decades, Israel always ruled forward and forward and slowly but gradually increased its territories by building settlements and occupying West Bank and then now enforcing upon the whole city of Jerusalem as if just a Israeli town.

These are all moves that may not immediately give results, but always putting a mark moving a foot step forward and then maybe stopping and waiting for a few years and then taking another step and then always increasing and enlarging its territory and occupying more and more lands of Palestine.

“Many in Turkey suspect that Israel aims at a larger territory, including Mesopotamia and southeastern parts of Turkey”

Of course we all suspect that the ultimate aim is to create a Palestine without Palestinians and to force Palestinians to flee or accept to be a minority within the Jews as second class citizens. Furthermore, many people in Turkey suspect that Israel aims at a even larger territory, encroaching into the territory of other countries, including to Mesopotamia and the south eastern parts of Turkey through the assistance of the US. Hopefully, they will not materialize that but if there will be a US’ puppet Kurdish State, that will be fully Israeli ally and they will unite somehow their forces to the corridor to be established over crossing Syria and maybe passing to the Jordan and then reaching into the sea. In fact there was a project of creating a Kurdish so called corridor in the south of the Turkish border, but Turkey by its military interventions prevented that. That would be very dangerous development for the whole region.

In order to find a solution and to ensure the two-state-solution, and for the full security, prosperity and peace for Palestinians, it is absolutely important to address this problem together and in the context of American designs on the region.

“We need an established regional mechanism against Israel’s aggressions”

If we look at the Arabic and Islamic World, we can’t see the unity which should exist. They are divided politically amongst themselves and the declarations and condemnations are not enough here. Unfortunately, sooner or later there will be another Israeli aggression through the road. And answering that, there should be an established mechanism. The minute that Israel attacks Palestinians, attacks al Aqsa or Gaza, these sanctions should be set in motion. At that moment.

For example, if there is a planned decision among the key states like Dr. Naim suggested decide to stop imports from Israel or stop air traffic, than this will be meaningful action. There should be action in economic, trade and maybe cultural areas to stop Israel and make it feel that it cannot go on like this. If they want peace, there should be a two-state-solution and Palestinians can exist peacefully and rule themselves. And there should be no more Israeli attempts to seize land from Palestine or from other countries.

These are of course the general views we have and Turkey is trying to do its best within this capacity. We traditionally had good relations with the Jews, starting from the Ottoman time when the Jewish people were expelled from Spain in 1492. Even which Israel and Turkey had very good relations until such time that Israel started to act aggressively and commit atrocities and an approach upon holy places. We have to make Israel understand that we can be friends again, there is no other reason why we shouldn’t be so, but they have to stop aggression.

Finally, I would like to express my hope that there will be a continuation of this events and create exchange more useful views. Thank you.