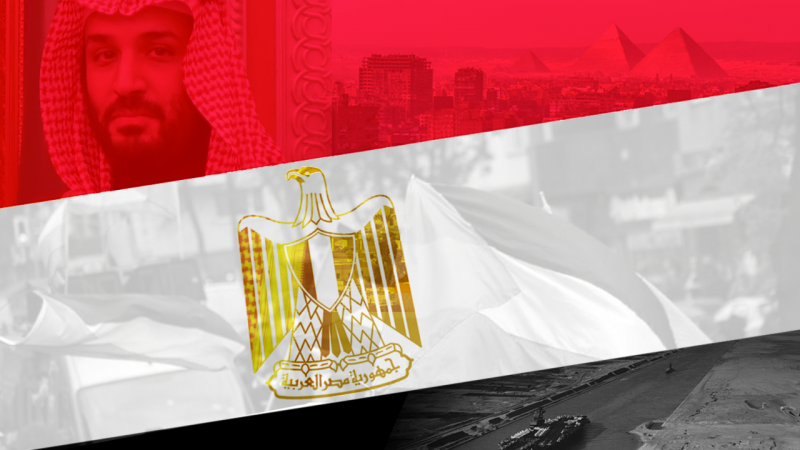 A photo with a vague caption: The secret behind Mohamed bin Salman’s secret visit to Sharm El Sheikh

On June 11, President Abdel Fatah Al Sisi surprised his followers with a photo of him with the Saudi Crown Prince Mohammed bin Salman, announcing that they met on the same day at his presidential residency in the coastal city on the Red Sea, Sharm El Sheikh.

“Today, I had the pleasure of meeting my brother Prince Mohammed bin Salman.. Our meeting focused on discussing ways to boost the joint relations between the two countries. Our visions on regional and international issues of common concern also coincided,” Al Sisi commented on his photo with the Saudi prince, which showed a big smile on their faces in a seemingly very friendly, casual meeting.

The Egyptian presidency gave no further details on the meeting, nor did the Saudi Royal Court, which raised speculations around the purpose of the visit and why it was not announced until it took place, and why it took place in some Red Sea resort and not in the capital.

Pro-government media anchors in Egypt speculated that the meeting was meant to refute the rumors about a dispute between the two leaders, and an assuring message to the Saudi investors in Egypt, anticipating regional changes in the upcoming period on all levels.

The Egyptian veteran media mogul, Emad Adib, who is in Saudi Arabia at the moment, revealed that the real reason behind the visit is to coordinate a unified Arab stance towards the Ethiopian stubbornness regarding the third filling of the Grand Ethiopian Renaissance Dam (GERD), which both Egypt and Sudan are opposing.

“To read into the recent visit and the issues the two leaders addressed, we should consider several activities took place in the region in the last two weeks; during Ramadan, the Emir of Qatar visited the Kingdom of Saudi Arabia, then Abu Dhabi Crown Prince Mohamed bin Zayed visited Cairo, then a consultancy meeting took place in Doha on the level of Arab foreign ministers, and the Saudi minister of state for African affairs Ahmed Kattan is in Addis Ababa now, mandated to hand over a message from the King to the Ethiopian prime minister Abiy Ahmed, thus, Mohammed bin Salman’s visit to Sharm El Sheikh is part of a very dynamic movement in the region,” Adib told Kelma Akhira on June 12, adding that electing the UAE as a non-permanent member to the United Nations Security Council (UNSC) will strengthen Egypt’s negotiating stance.

“These meetings are an attempt to avoid turning the conflict between Cairo and Addis Ababa into a military action, and bring the two parties back to the negotiations table,” Adib added during his phone interview.

When asked about other issues discussed at the meeting between Sisi and MBS, the former TV anchor said: “I cannot imagine a summit between Egypt and Saudi Arabia that does not discuss the situation in Yemen and Palestine. Also, the recent developments regarding the negotiations to revive the Nuclear Deal between Iran and the United States must have been part of the talks between the two brothers, for its impact on the whole region, in case the two sides agreed on a deal.”

Adib pointed out that the talks tackled the potential reconciliation between Egypt and Turkey, saying that this was one of the kingdom’s conditions to revive the relations with Ankara.

Last week on June 9, the Palestinian factions convening in Cairo disrupted their dialogue over differences regarding the conditions determined by Israel in return of allowing the reconstruction of Gaza Strip.

The strip witnessed fierce bombing by Israeli jet fighters and was left mostly destroyed with its people struggling to obtain their daily needs. Meanwhile, Egypt allocated $500 million, Qatar allocated the same amount in order to reconstruct the devastated strip under Egyptian and Israeli supervision.

The Cairo talks collapsed after reservations of the Palestinian factions, specifically Hamas leaders, who affirmed their refusal of a prisoner trading deal offered by Israel, saying that they will not trade the release of the Israeli prisoners for reconstruction, adding that what they can do is trade a list of Palestinian prisoners in return of Israeli ones.

“It doesn’t make sense at all to let the Palestinian Authority (PA) manage the reconstruction of Gaza directly, while it did not stop the security coordination with Israel throughout the 11-day strikes,” a source from Hamas delegation in Cairo told Mada Masr, adding that President Mahmoud Abbas, the head of the PA, has not assisted Gaza and insists to act like a leader, while he does not fulfills the requirements of leadership, wondering, “Where is he regarding the suffering of the Palestinian people in Gaza?”

When asked about whether Hamas demanded the release of the Fatah member at the Israeli prisons “Marwan Barghouti,” the Hamas source refused to answer, saying that the movement is negotiating the release of the Palestinian prisoners, no matter their factional affiliations. Barghouti is one of the top names set to compete with President Mahmoud Abbas in the presidential elections that were canceled by the PA.

An Egyptian official source, who Mada Masr chose not to identify, affirmed that Cairo is working relentlessly to accelerate the reconstruction as one of the pillars that support the ceasefire deal, by bridging the gap between the PA and Hamas, affirming that Israel, the United States, and even the European Union, will not allow Hamas to take charge in the reconstruction process.

“The conflict between the Palestinian factions still standing,” an Egyptian reporter that covers the Palestinian dialogue commented regarding the outcome of the negotiations, adding that the Egyptian administration does not support any party at the expense of another. He excluded that another war would break out between Israel and Hamas in the near future.

It is worth mentioning that the delegations representing the factions remained in Cairo for further negotiations, while keeping the Egyptian officials as mediators between the governments in Gaza and Ramallah.

Can Russia replace the Suez Canal with the Northern Sea Route?

The first and the most important waterway in the world has been under pressure following the emergence of several projects led by some “friends” of Egypt, starting from the Israeli-Emirati project the links the port of Eilat in the Red Sea with the port of Ashkelon in the Mediterranean, a new navigation passage has emerged, this time led by one of Cairo’s best allies, Russia.

On June 7, Russia’s oil firm, Rosneft announced starting meeting with contractors and foreign traders for its massive project Vostok Oil, which will come online in 2024, likely to see many more tankers transporting oil between Asia and Europe through the Northern Sea Route mainstream

Russia has used the crisis of the Ever Given cargo ship that got stuck at the Suez Canal for six days last March, suspending the navigation movement and causing losses of billions of dollars every day to promote its waterway through the statements of Russian officials saying that the new route will be cheaper and safer.

“Transportation of goods along the Northern Sea Route should not be more expensive, but in the long term cheaper than along the Suez Canal”, deputy prime minister Yury Trutnev told reporters earlier in June.

Trutnev also asked the Ministry for the Development of the Far East, the Ministry of Transport and Rosatom to conduct a joint economic analysis on how to make the alternate Asia-Europe waterway more competitive with the Suez.

According to experts, the Northern Sea Route, which connects the Atlantic ocean with the Pacific, gives only a competitive advantage which is a shorter time than navigating through Suez Canal, but not worthy comparing to the disadvantages that include the width of the route that can only small cargo ships, unlike the Suez Canal that can allow the passing of cargo amount up to 240,000 tons.

On the other hand, the Russian route cannot work all year long due to weather circumstances, not to mention it lacks the required infrastructure of rescue and maintenance services and the painful environmental impact, according to Arab Finance.

The project is gambling on the technological progress of the cargo ships that allows them to pass through such tough weather circumstances (or it waits until the ice melts down in the Northern Pole during summertime), which doesn’t exist in most ships. It is worth mentioning that only 11 ships contains such technology until 2010, while the number rose to 133 ships in 2020, which is incomparable to Suez Canal that embraced 19,311 ships during the fiscal year of 2019-2020, making it dominating 12 percent of the world trade scale, according to Albawaba.