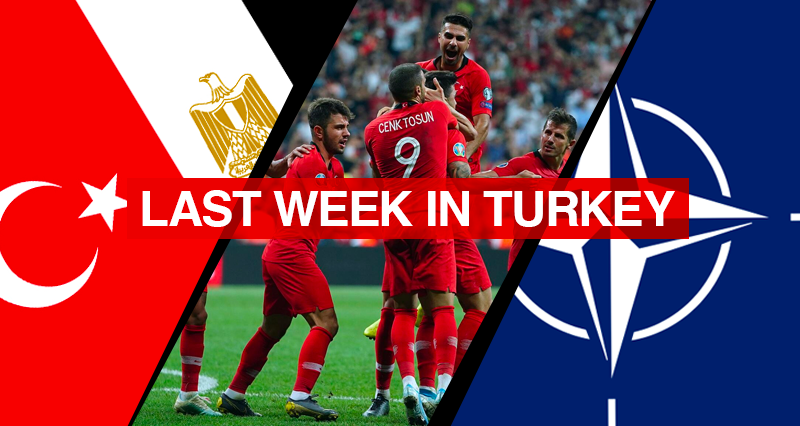 The public agenda in Turkey was busy last week with three main topics.

The first was the new phase of parliamentary diplomacy between Turkey and Egypt and the establishment of Turkish-Egyptian Friendship Parliamentary Group headed by Ismet Yilmaz in Turkey.

The second was the Euro Cup 2020 Group Stage Matches, and particularly the match between Italy and Turkey.

The third was the survey conducted among EU countries about the reliability of NATO allies, with Tukey coming up in the lowest score with only 23% of respondents seeing the country as reliable.

New parliamentary diplomacy steps are being taken as a part of the new era of Turkish-Egyptian relations.

On Friday, the Chair of the Egyptian Friendship Group of the Turkish Grand National Assembly, Ismet Yilmaz, gave information on the details of ongoing parliamentary diplomacy efforts with Egypt.

Yilmaz said that a new bridge of friendship had been established with Egypt. “Hopefully, when this platform is mutually created on the Egyptian side, we will achieve a status of parliamentary diplomacy on top of public diplomacy.”

While giving off the signs of inter-parliamentary visits, Ismet Yilmaz said “Our Deputy Ministers of Foreign Affairs have already met. Now our Foreign Ministers will meet soon. Relations which had been in charge d’affaires status level will be raised to the embassy dialogue level. In the meantime, there will be visits between the two parliamentary groups.”

While emphasizing that the friendship group will also contribute to the economy, Yilmaz said “We have a very large trade volume. Again, there are a large number of Turkish investors there.

We believe that when we maintain this parliamentary diplomacy effectively, this volume of trade will increase even further. Our brotherhood is eternal.”

The friendship parliamentary group was formed on April 20 after an eight-year gap in relations.

Its chair and executive board has been selected. Now, all eyes are on the Egyptian Parliament.

The first step came from the Turkish Grand National Assembly, as various normalization steps between Egypt and Turkey followed one another. Speaker of the Parliament Mustafa Sentop has given the first signs of a new era of diplomatic contacts with Egypt. Stating that a friendship group will also be useful in the relations between the two countries, Sentop said “It is important for Egypt and Libya to establish a friendship group, since our friendship groups are the pioneers of parliamentary diplomacy.”

The application to the Parliament for the establishment of an Inter-Parliamentary Friendship Group between Turkey and Egypt took place in late April after an 8-year absence, and was voted on by the General Assembly on April 30.

On the other hand, the Egyptian Foreign Minister Sameh Shukri has said that “based on mutual respect, relations between Turkey and Egypt will progress gradually” last Saturday.

Speaking to an Egyptian TV channel, Shukri said that the relations with Turkey are being addressed on the basis of “non-interference in internal affairs, mutual respect and interest.”

Referring to Turkey’s stance on relations with Egypt, Shukri said that Turkey “declared its commitment to international law, diplomatic practices, principles of good neighborly relations, and non-interference in the internal affairs of other countries.”

“Egypt wants to have close relations with its regional and international partners on solid grounds and in its own interests,” he added.

Shukri said that bilateral relations will develop at an appropriate time “after monitoring, evaluating, and seeing that it is really in Egypt’s interest.”

Last week, Cavusoglu said talks between Turkey and Egypt could next develop with a meeting of the countries’ foreign ministers and the mutual appointment of ambassadors.

Cavusoglu also stressed: “If our relations with Egypt normalize, there are many countries that we can cooperate with, which need this cooperation.”

Ankara and Cairo have recently released statements on bilateral ties, suggesting a restoration in relations after more than seven years of political estrangement.

The two countries exchanged positive signals on establishing contacts and dialogue, including possible talks to demarcate their maritime borders in the Eastern Mediterranean.

Turkey managed to qualify for the Euro2020 final tournament after a run-off of the Group H, which consisted of France, Iceland, Albania, Moldova and Andorra.

Turkey has qualified for the Euro2020 final tournament, entrering Group A with Italy, Wales and Switzerland.

Despite being highly motivated for the tournament, Turkey lost its first game with Italy (3-0).

The Managers of the teams were Senol Gunes and Roberto Mancini.

The game was played on June 11, 2021 at 21.00 (UTC+2), in Stadio Olimpico sports complex, which is the largest stadium in Rome and second largest in Italy.

The game was refereed by the Dutch referee Danny Makkeile.

The Turkish team will have games with Welsh team on June 16 and with Swiss team on June 20, in Baku Olympic Stadium in Azerbaijan.

According to a public survey conducted by the research company Kantar Public and commissioned by the German Marshall Fund of the United States (GMF) and the Bertelsman Foundation, Canada was the most trusted country with 75%, followed by Germany and Sweden with 73%.

The least trusted partners were Turkey with 23%, and Poland with 45%.

The report “Transatlantic Trends 2021”, which was prepared to survey the trends in the Transatlantic alliance, included the results of the survey of thousands of people in Canada, France, Germany, Italy, the Netherlands, Poland, Spain, Sweden, Turkey, the United Kingdom and the United States.

According to the survey, 76% of respondents in Germany and in the Netherlands, 74% of Sweden, 73% of Italy and 72% of French people found Turkey as an unreliable partner.

The percentage of Americans who find Turkey ‘unreliable’, were lowest among the respondents, but still at 42%.

Germany was the country that is the most trusted by participants from Turkey, but still remains at only 54%. The percentage of people in Turkey who trusted France is at 26%, and the trust towards the United States is the lowest in Turkey at 23%.

Some other answers were interesting as well. The most influential country in Europe was found to be Germany by all respondents, with 60%, the UK with 19%, France with 7%.

Turkey also shared 4th place as the “most influential country in Europe”, alongside Italy and Spain.

Turkey also was the country that looked the most positively to their country’s involvement in the Middle East, followed by the US.

Turkey was also the country that responded the most positively to the questions of “How do you think your country should approach China?”

Turkey was also the country with the second most positive answers regarding the role of the UN only behind Spain, and in second place in terms of  countries that want their government to address climate change, only behind Italy.

Turkey answered the highest to the question “How informed do you think you are on the foreign policy of your country?” with 14% very well informed, 52% somewhat informed, 23% not very informed and only 5% saying “not at all informed”.