Julian Assange and the Independence of Scotland 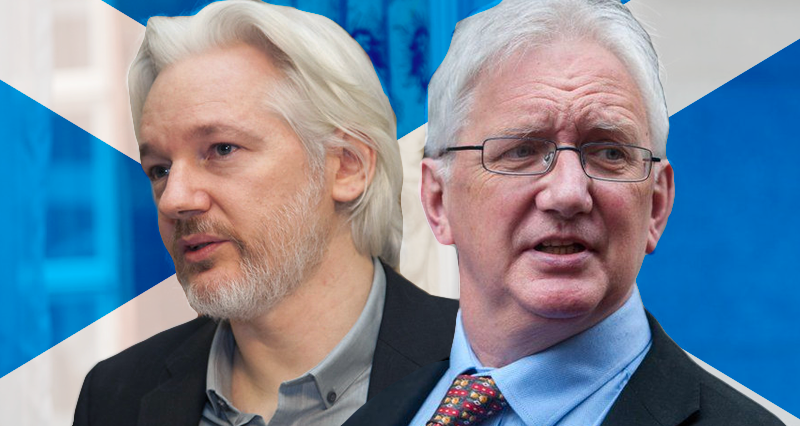 Let me tell you a story. Well, in one country a Politician was accused of sexual harassment of female co-workers. No. Come back. Not accused. Just some people started to say that someone, something, maybe, you know … something. The Politician banged his fist on the table saying: “Enough gossips!”. He himself demanded court proceedings and clarification of backstage slander. The Politician asked questions to his own government, because that was where the rumours and shadows of accusations came from. The case went out of the shadows, grew loud. It turned out that against the Politician, there had been set up a conspiracy. That he was to get bogged down in a network of false accusations, to deal only with refuting unspoken suggestions – so as not to disturb the Government that is formed by … his own colleagues. Including the person he once had chosen as his successor. Today, this person does not remember anything – neither who made her the First Minister, nor how she plotted against him. “I’ve just forgotten” – she said when investigated publicly about it. This Politician is Alex Salmond, former First Minister of Scotland. The one who forgot – the current First Minister, Nicola Sturgeon. And the whole thing broke out when A. Salmond directly asked his former pupil if she had forgotten about the most important and only goal – the independence of Scotland.

Of course, „true” accusations against A. Salmond exist. Not unlike N. Sturgeon, he invariably puts the issue of independence first, while the current First Minister is primarily concerned with promoting a new definition of gender, fighting trans- and queerphobia, and then posing as Notre Dame de Covid, the Saviour of the Nation from the Coronavirus. With such great works – the simple independence of a small, picturesque country at the edge of Europe, of course, had to be relegated to the background. And only this A. Salmond disturbed! And he talks about his doubts as the host of his own show at RT! And he said publicly that he was not convinced by the official evidence of the Salisbury poisoning! Do you need more evidence that this politician is surely at least a molester?!

But this is not a story about the Politician. Here was a Friend in the gallery of his trial. Someone who was driven by the instinct of justice more than friendship – described that farse. And – according to the prosecution – he described it in such a way that it was possible to identify the false accuser testifying against the Politician. Sounds complicated? OK, let’s me explain again: former Scottish First Minister Alex Salmond did not molest his accuser. The charges against him turned out to be false. But because the whole thing was somehow related to sexual matters (and it does not matter that contrived ones) – the identity of witnesses was kept confidential. So, when Craig Murray wrote his blog about the Salmond case – it was assumed to be identifying the victim. Who was not a victim but a false accuser. Brighter now?

No, I don’t think so yet. Craig Murray is the former British ambassador to Uzbekistan. Contrary to the orders of the UK government, he exposed cases of gross human rights violations and participation in illegal CIA operations in that country. As a result, without regret, he said goodbye to diplomacy to return to Scotland, where he is active in the national independence movement. And like A. Salmond, he belongs to the hawks of independence – those who want it quickly, in the first place and not just any, but real, outside the system of American and British imperialism, outside NATO, friendly to a free Palestine. Doesn’t that make him an obvious criminal?

Yes, it does. Not only was C. Murray charged, but in his own trial (strangely correlated with the recent Scottish Parliament elections) he was sentenced to eight months in jail. The verdict was announced 11 May 2021, just a few days after elections what seemed to be the system’s revenge for the crushing victory of pro-independence forces. But the date of his imprisonment was also not accidental. „I was supposed to be on a plane right now flying to Madrid to give evidence for the Spanish prosecution of UC Global for spying on Assange’s legal team. The Scottish court has prevented me from doing that for no good reason – my next court appearance here is 7 June” – C. Murray wrote. He is one of the main witnesses in the Spanish trial of J. Assange, presenting hard evidence that „That is without adding the fact that the CIA was also secretly video recording Assange – through the UC Global security firm – and was specifically recording his meetings with his lawyers. As it happens, UC Global also recorded for the CIA several of my own meetings with Julian, and I shall next month be travelling to Madrid to give evidence in the criminal trial of David Morales, CEO of UC Global, for illegal spying (UC Global is a Spanish company). At least, I shall be, if I am not in prison myself as a result of the suppression of my own reporting of the defence in the Alex Salmond case.” Such entries on the author’s blog turned out to be quite sufficient for him to quickly find himself in a situation not much different from his friend Julian one.

However, this is Scotland. The country not only of Wallace and Bruce, but also of John Maclean and Hugh MacDiarmid. When someone steals the truth – the Scots can really get upset. In just a few days, the public fundraiser covered the £143,000 needed to pay for an appeal to the Supreme Court. But the decision itself still seems uncertain, although C. Murray is defended by straight facts („My appeal will be based on the simple fact that I did not identify anybody”). In addition, the whole case is precedent, because no one has yet been convicted on the charges of “jigsaw identification“. If the appeal is not accepted, C. Murray will eventually be imprisoned, and his subsequent appeals will take months to be judged. And during this time – the blogger will be silent. As well as in the case of J. Assange and other illegal activities of the CIA or MI5, as the independence of Scotland. And this will both please imperialist governments and secret services and harm the Scottish cause. Or at least its another important supporter will be eliminated.

And the threat is all the greater that even the Scottish independence movement, including the Government of the Scottish autonomy, is penetrated by supporters of the idea that it should be just another “country like any other”: social-liberal, obedient to the imperialists and globalists, tolerating nuclear weapons on its territory, caring mainly for the interests of international corporations. etc. So those who want Scotland’s independence to be just a fiction. They are bothered by Alex Salmond and Craig Murray. And therefore, they both must be silenced at all costs.