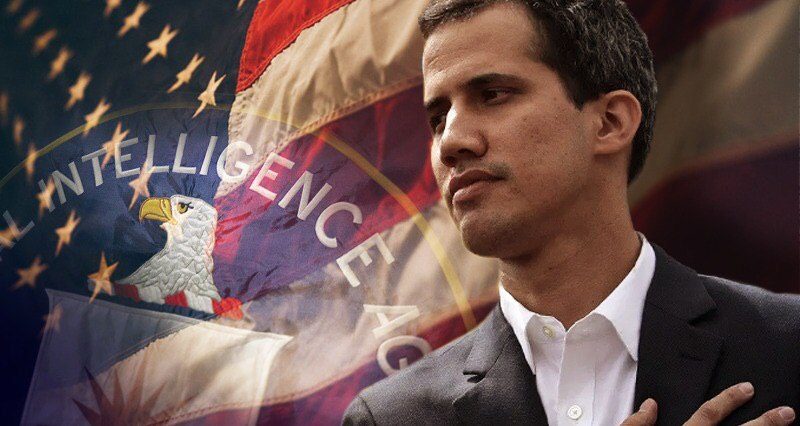 US President Donald Trump, who has left multiple countries in a state nervous suspense from the first day of his presidency, continues to threaten the world community like some kind of petty Mafioso, this time setting the crosshair on Venezuela.

While Trump continues to tweet scattered threats to people across the world, White House press-secretary Sarah Sanders recently expressed her belief that God himself “wanted Donald Trump To Become President.” While this might sound like a joke, she was unfortunately being completely serious.

“God’s chosen one” apparently woke up one morning and decided he could best fulfill his sacred destiny by destroying a South American nation, and Venezuela seemed particularly ripe.

Despite the blood in Iraq and Libya still not having dried, the US has already announced their support for Venezuelan opposition leader Juan Guaido’s violent coup attempt… and they didn’t stop there: as is par for the course, the US turned belligerent threats and obstinate ultimatums to get its way, demanding that other countries around the world choose the “correct” position on the issue.

US authorities hadn’t even finished their sentence before Europe’s most ardent guardians of human rights (such as Germany, Great Britain, France) also declared support for Guaido. As countries throughout Europe voted to recognize Guaido as the new president of Venezuela, the EU as a whole demanded that snap elections be held.

The world splits in two

In addition to Turkey and major powers like Russia, China and Iran, the legitimately elected president of Venezuela, Maduro, has been offered support and solidarity by 17 countries, as well as two states not recognized by the UN. Beijing and Moscow have also announced their refusal to join in the embargo imposed on Venezuela.

The Venezuelan crisis has become the number one topic in the media, spawning endless analysis of the country’s crisis and prospects for a resolution. Among the volumes of articles on the topic, Hüseyin Vodinalı’s work in Turkey’s Aydınlık newspaper are not to be missed. Two articles in  particular are so rich and deep in their analysis they are worth reiterating to an English language audience.

IN THE BEST TRADITIONS OF AN ACTION FILM

In his analysis, Hüseyin Vodinalı discusses who is ultimately behind the American coup attempt in Venezuela.

The journalist emphasizes the surprising similarities between 35-year-old Juan Guaido,  “appointed” as president of Venezuela by the US, and Mikhail Saakashvili, who took over as president of Georgia in 2008. “Saakashvili, a lawyer educated in America, was only 37 years old when he came to power through a “color revolution” staged by Washington. In 2008, he was ordered by the US to occupy Russian territories, but ultimately defeated. He later became a governor in Ukraine but was eventually removed from this post and even had his Ukrainian passport canceled. Defeated and abandoned by his Washington handlers, he climbed onto the roof of a building in Kiev and tried to commit suicide. Today his whereabouts are unknown. Guaido, a young Venezuelan upstart who does not particularly stand out among the members of the far-right party organizing violent street protests across the country, was, like Saakashvili, a pupil of the CIA,” Vodinalı writes.

In another article, the journalist mentions violent crimes in which Elliott Abrams, the US special envoy to Venezuela, was directly involved, alongside the general lies omnipresent in stories about Venezuela throughout Western media.

A pupil of the ‘US Regime Change Laboratory’

The title of an article by writer and film producer Dan Cohen in collaboration with honored journalist and writer Max Blumenthal and published on Grayzone , eloquently speaks for itself:

“The Making of Juan Guaidó: How the US Regime Change Laboratory Created Venezuela’s Coup Leader”.

According to the American opposition writers, this process began ten years ago. Argentine journalist Marco Terruggi and Venezuelan research journalist Diego Sequera write that Guaido was educated in Washington and was groomed to overthrow the socialist government.

On October 5, 2005, a group of young Venezuelan “student leaders” was brought to the Serbian capital Belgrade. They were participants in a US government program called CANVAS (Center for Applied Nonviolent Action and Strategies). This structure is part of the CIA division of the National Endowment for Democracy (NED) and a non-profit organization. CANVAS is a program friendly to the Serbian protest group “Otpor,” another organization funded by the CIA and George Soros. The main activity of NED is to organize regime change in governments hostile to Washington’s interests abroad.

Guaido’s work among the ranks of CANVAS began in 2007 after he graduated from the Andrés Bello Catholic University in Caracas. He then moved to Washington and attended George Washington University. Luis Enrique Berrizbeitia, one of the most prominent neoliberal economists in Latin America, was his curator at the university. Berrizbeitia, unsurprisingly, used to hold a top managerial position in the IMF.

In 2007, when Guaido was 27 years old, he began to actively participate in protests in Venezuela. Alongside a number of activists bred by Washington to topple foreign governments, Guaido became part of the self-titled “Generation 2007” group.

For his role in organizing street protests in Venezuela, Guaido’s mutual friend Yon Goigochea was awarded the “Milton Freedom Prize for Advancing Liberty.”

The winner of the prize doesn’t just get a certificate and prestige, but is also granted a $500,000 cash prize. Their organizing efforts produced dignified protests, such as one where the students, Guaido included, pulled down their pants and exposed themselves on a public street.

Among their team was also Leopoldo López – a representative of the spoiled “golden youth”, from a family of oil magnates.

This team, starting in 2010, received $40-50 million dollars a year from the United States Agency for International Development (USAİD) – an arm of the CIA, hiding under the guise of a humanitarian organization.

In 2010, at the Fiestana Mexicana Hotel, Guaido and his comrades developed a plan to remove Chávez from power. The plans for the coup did not differ significantly from those made in the past, relying heavily on the organization of bloody street protests. The Venezuelan government became aware of this coup attempt in 2014.

Among the instigators of the coup was María Corina Machado from Miami. She was well received and often met with George W. Bush himself. The Venezuelan government intercepted emails between Machado-Guaido-López and the other putschists.

The CIA team’s plans to organize violent protests and overthrow the socialist government then become public, along with their masters’ orders to do so.

Some of the “activists” got a jail sentence, some manage to escape. Pro-American human rights organizations immediately declared those captured to be “democratic heroes.”

One of the coordinators of this team was the bloodthirsty CIA killer Elliot Abrams, who was recently appointed as the US special envoy for Venezuela by Mike Pompeo.

The ‘Voluntad Popular’ Party, headed by Guaido, is a small marginal right-wing party that has been receiving money from the United States to organize street demonstrations for the past 10-15 years.

Guaido’s task is to foster conditions for “humanitarian intervention” in Venezuela, i.e. prime the country for a coup. Despite being a useful pawn for the moment, there is little double that Guaido will one day end up like his “half-brother” Saakashvili… if he is lucky.

“If John Bolton were not a fascist and a follower of neo-conservatism, he might be reminiscent of the master of the short story Mark Twain.

Yet, in his present form- wearing a tie with flying elephants on it and holding a huge yellow notebook where he has written “Let’s send 5 thousand soldiers to Colombia,” – he does not resemble anyone except a tragicomic caricature of himself.

Trump and his signature straw forelock have a competitor for caricatures in Bolton and his wispy mustache.

And of course, let’s not forget about the heavyset ex-Chief of Intelligence and new war minister Neocon Mike Pompeo, nor his nominee for the post of US special envoy for Venezuela Elliott Abrams. Abrams is an actual murderer and could be mistaken for Gargamel’s twin.

Abrams is responsible for the murder of 200,000 civilians in Guatemala. He was deeply involved in organizing and expanding the scope of the activities of the “deep state” throughout the world, and, above all, in El Salvador, Honduras and Guatemala.

Abrams is also known for helping both Bush elder and Bush junior justify the occupation of Iraq, authoring the infamous lie that the country possessed weapons of mass destruction.

A pleasant bunch, no?

The figures involved in preparations for the plundering and ‘rape’ of Venezuela do not even deserve to be defined as the imperialists; they could more accurately be described as a gang of bandits.

Those fighting for the independence during the occupation of Iraq actually did refer to the American military as “bandits.”

Today, this team is not only imposing new sanctions on Venezuela, but has also confiscated its gold reserves, bribed its servicemen, and made preparations to send in thugs from Colombia.

The United States and Great Britain have seized billions of gold reserves from Venezuela. Colombia and Brazil, which are ruled by pro-American governments, are beginning to put troops on the border.

Even Israel, no longer satisfied with bombing Syria and the Gaza Strip has sent special forces to Brazil.

Guaido and his CIA team are trying to win over the disciplined soldiers trained by the socialist government, including its highest-ranking officers.

American puppet Guaido can walk freely in Caracas because Trump is threatening to destroy anyone who dares to speak out against his “pupil.”

The United Kingdom, Germany, France, Spain and Belgium received a call for Venezuela to hold early presidential elections within 8 days. Otherwise, they, they say, recognize the president of Guaido!

All these countries, particularly Spain and France, are united by their bloody colonial past.

The dish which the US has prepared for Venezuela has a rather similar taste to those prepared for Iraq and Syria… but this time it will not be so easy for America to feed it to the public. China and Russia have declared their firm determination to support Venezuela.

In the American press, Trump and his gang have been openly mocked. For example, Splinternews recently released an article titled: “These imbeciles cannot even prepare a coup properly.”

This shameful coup attempt will go down in history as the abominable crime of a dying empire. Washington could not achieve its goals in Syria or Turkey, and in Venezuela, nothing awaits it but defeat”.