Sea Mucilage Crisis in the Marmara Sea; elimination of the PKK terrorist leader in Northern Iraq and ongoing operations; government-tied newspaper publishes survey: majority of Turkish people considers the US a hostile country 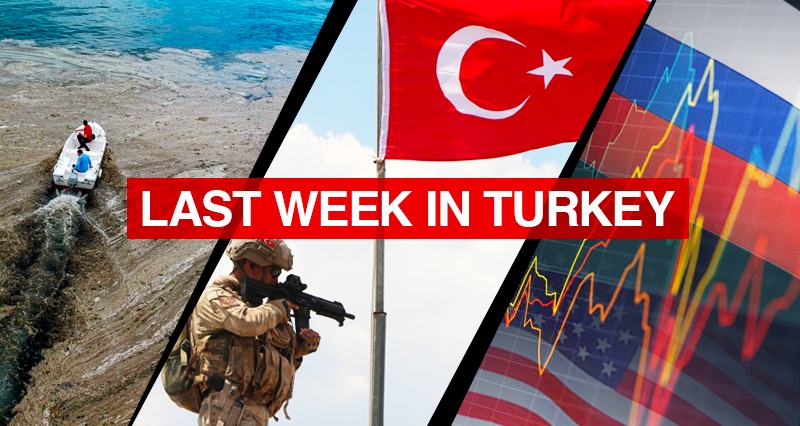 The first has been the surge of a sea mucilage (sea snot) layer all over the Marmara Sea, and the mass panic it caused.

The second has been the elimination of the PKK ringleader of Makhmur Camp and the ongoing operations in the Northern Iraq.

The third has been the survey made by the newspaper Yeni Safak, which is known to have ties to the Turkish government, about the rising unpopularity of the United States in Turkey.

Turkey is preparing to take steps for the protection of Marmara Sea as “sea snot” or marine mucilage has been spreading in the waters since February.

A mass panic has spread among the people who saw the layer that spread all over the sea increasingly in the last weeks.

The Bilim-2 (Science-2) research vessel of the Middle East Technical University (METU) has already started investigating the causes of pollution and mucilage formation in the Marmara Sea.

Marine Sciences Institute Director Baris Salihoglu told that the METU recently focused on the Marmara because scientists observed an ongoing decrease of oxygen in the sea.

Research is mainly focused on current factors such as the decline of oxygen and salt that affect sea snots in the Marmara and Salihoglu said it would take at least six to seven years to see an improvement if precautions are taken as soon as possible.

“A very quick recovery is not easy, it takes time and patience,” he said.

Underlining that “human pressure” similar to the Marmara also exists in the Black Sea and the Mediterranean, he said the difference in the Marmara is that “it is a closed sea.”

On Friday, the dean of maritime faculty at Bandirma Onyedi Eylul University said that the establishment of a mucilage warning system for the Marmara Sea is needed.

“Unless we change our waste management system, we have no chance to get rid of mucilage” he said.

He underlined that trying to clean the mucilage via ships is not a sustainable solution. In areas such as harbors, shelters, marinas, shallow bays and gulfs, the parts that thicken on the surface should be removed so organisms below do not disappear.

Sari drew attention to the need for the reduction of fertilizers and chemical pesticides in agricultural production, and that Turkey has to switch to good agricultural practices.

“We need to define a new waste management policy for the Marmara Sea with a holistic approach, but definitely we have to take climate change into account,” he said.

On Saturday, President Recep Tayyip Erdogan said that Turkey would overcome the problem of mucilage formation in its waters, especially in the Sea of Marmara.

“We’ll save our seas, especially the Sea of Marmara, from this mucilage problem,” Erdogan said at a mass opening ceremony on the occasion of World Environment Day in Istanbul.

With a team of 300 people, the ministry is currently carrying out inspections at 91 different points of the Sea of Marmara, as well as all wastewater refinement and solid waste facilities on land, to detect the source of pollution, he said.

On Sunday, teams from Turkey’s Environment and Urbanization Ministry started clearing the Sea of Marmara from the mucilage.

The teams started work from the Caddebostan coast in the Kadıkoy district of Istanbul to get rid of the mucilage covering Turkish shores since February.

They laid a barrier on the sea to let the mucilage accumulate at one point before transferring them to storage tanks to dispose of later.

Turkish authorities on Sunday announced a 22-point action plan to clear a recent surge in mucilage, also known as sea snot, covering the surface of parts of the Sea of Marmara in the country’s northwest.

“As part of the emergency response, as of June 8, 2021, efforts will be launched to completely clean the mucilage in the Marmara Sea with scientific-based methods on a 24/7 basis,” Environment Minister Murat Kurum told.

“We will launch efforts to designate the entire Sea of Marmara as a protected area,” said Kurum, adding that the 4,382 square mile body of water would be brought under protection by the end of the year, which would also help conserve its biological diversity.

“According to our scientists, if we reduce the amount of nitrogen by 40%, we’ll have solved the root of this problem. In the next three years, all our provinces in the Marmara region will complete their work on converting wastewater treatment plants,” he said.

The plan will also entail supporting the expanded reuse of treated wastewater wherever possible and the application of clean production techniques, said Kurum.

Pointing out that 90% of solid marine waste and garbage comes from the land, Kurum said that in a year, all of Turkey’s provinces and districts on the Marmara coast would transition to zero-waste practices.

Sea snot is the overgrowth of microscopic algae called phytoplankton. The thick, mucus-like slimy layer contains a variety of microorganisms and is caused by increase in seawater temperature due to global warming, stillness at sea and pollution.

To prevent marine mucilage, waste must be discharged after refinement, the process of removing impurities.

About 25 million people live in seven cities on the Coast of Marmara Sea.

A so-called senior PKK terrorist has been neutralized by Turkish Intelligence, as the president announced on Sunday.

Erdogan said Turkey would not allow the “treacherous and separatist organization” to use Iraq’s Makhmur district as an “incubation center” for terrorism.

“We will continue to eradicate terrorism at its source,” he stressed.

Two more terrorists were neutralized together with Bozkir in the operation on the PKK’s Makhmur camp, according to a security source.

Bozkir was wanted by the MIT as he was functioning as a ringleader in the site, portrayed as a refugee camp but actually serving as recruitment and training area for the PKK.

Turkish intelligence found out that the camp was very crucial for the PKK terrorists, where they were recruiting and training members for their activities under the disguise of the camp.

Turkey had launched Pence-Simsek and Pence-Yildirim operations on April 23 in northern Iraq’s Metina and Avasin-Basyan regions.

Gendarmerie forces neutralized another three terrorists during the air-backed Operation Eren-11 in a rural area of the Bitlis province.

US Central Command (CENTCOM) on the other hand, has recently said it provided a medical class for YPG/PKK terrorists (under the name SDF), guarding oil facilities under its occupation.

The US-backed SDF is spearheaded by the YPG, the Syrian branch of the PKK. The PKK is a designated terrorist organization in Turkey, thus Washington’s support for its Syrian affiliate has been a major strain on relations with Ankara.

Noting that the terror group is responsible for protecting the petrol infrastructure in eastern Syria, CENTCOM said: “The TF War Club medics taught lifesaving interventions and techniques that focused on traumatic wounds to members of the CPIG Academy.

It added that those who finished the training were presented a certificate of completion, adding that the Task Force War Club was deployed in the CENTCOM region to support its anti-Daesh/ISIS Operation Inherent Resolve and Operation Spartan Shield, which carries out different missions in the Middle East.

The survey in Turkish Government-tied newspaper: US highly unpopular among Turkish population

Yeni Şafak Newspaper, which is known for its ties to the Turkish government, has published the results of a new survey reflecting the negative public view of the United States among Turkish people, just before the Erdogan-Biden meeting.

The research company Areda Survey has revealed the Turkish people’s negative view of the United States, which has been supporting the terrorist organizations of PKK/PYD and FETO, and has been cooperating with Turkey’s public enemies.

To the question of “What are the most important foreign policy events that could happen to Turkey in the next 10 years?”, 53.7% of respondents have answered “The US activities in Turkey’s immediate vicinity”.

The United States has ranked first among the foreign countries that pose a threat to Turkey, with 54.6 percent. It was followed by Israel with 51 percent, and with the United Arab Emirates with 31.1 percent, and finally by Saudi Arabia with 30.7 percent.

The survey also asked the question “Which phrases best describe the United States in terms of its relations with Turkey?”

Thirty-five percent of the respondents described the United States as an ‘unreliable country’, while 32.8 percent described it as a ‘colonialist power’.

When the question of “What are the biggest problems between Turkey and America?” 56.8 percent of respondents have answered “The American support for the PYD/YPG”, while 46.7 percent has answered “The US policies in the Middle East”, and 42.5 percent said “Turkey purchasing the S-400 defense systems from Russia”.

When the important area of cooperation between Turkey and the United States was asked, 85.9 percent said that “to gain a balance against Russia”, while 50 percent of respondents said there would be no significant change in the Turkey-USA relationships in the next couple of years. 72.2 percent of respondents said Turkey should not “cooperate with the United States” when carrying out its own foreign policy.

When the question of “If you were to choose between the United States and Russia, which country would you like Turkey to further develop its relations with?” is asked, 78.9 percent of respondents answered in favor of Russia, while 21.1 percent favored the United States.

Participants were also asked about relations with Russia. When asked “How would you describe relations between Russia and Turkey?”, 58.2 percent of respondents gave the answer “There is a strategic partnership”.

Some participants had also noted for the cooperation on “the future of Syria, unity in the international policy, mutual security and the fight against terrorism”.

64.1 percent of respondents said ‘yes’ to the question of “Should Turkey cooperate with Russia when carrying out its own foreign policy?”, and 35.9 percent answered ‘no’.

When asked “What do you think about Turkey’s preference to buy S-400 systems and F-35 jets in the field of national defense?”, 69.3 percent of respondents said the purchase of the S-400 systems was the right decision.

Thirty-seven percent of respondents favored the continuing the F-35 program with the United States.