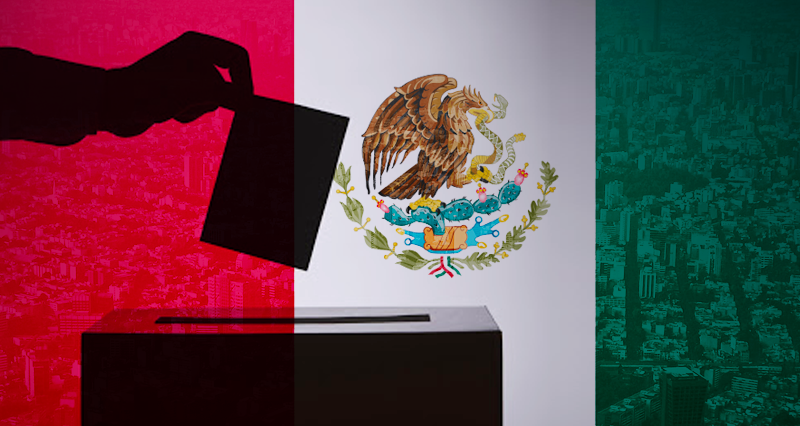 Mexico is going to elections this Sunday, 6th of June. 21,368 positions are at stake. 15 governors of states – Mexico, official name United Mexican States, is a federal state – will be elected. 500 deputies of the Federal Chamber, the Lower House of the bicameral Mexican legislative system will be elected. Additionally 30 local congresses will be renewed as well as 1,063 state deputies. The electorate will also vote on 1,926 town halls and municipal boards.

In other words, half the country will elect new state governments and politicians will compete for more than 21,000 seats in the largest elections in Mexico’s history. In addition, there are almost 95 million citizens registered in the electoral roll, for which 161,000 polls will be installed in the country.

During more than 70 years there was only one dominant party in Mexico, the Party of the Institutional Revolution (PRI), winning all local and federal elections. In 2000, the so-called ‘democratic transition’ took place and the PAN (Party of the National Action) arrived to power. The PAN was a conservative right-wing party that began the narrative of the war on drugs. In 2018, after competing in 2006 and 2012, Andrés Manuel López Obrador, or AMLO as he is called among the population, finally won the presidency of Mexico with a new party, MORENA (Movement of National Regeneration), bringing together various leftist positions and movements.

Currently, the MORENA rules the country supported by the Labor Party (PT), the Green Party (PVEM) and Deputies of the dissolved Party of Social Encounter (PES). These parties held together 334 of the 500 seats in the Chamber of Deputies.

Due to this reconfiguration of political power, in the elections of 2021 the PAN, PRI and PRD (Party of the Democratic Revolution) allied themselves, 3 totally different parties in their ideology and organization, to contend against MORENA and its allies.

National Mega Projects and saving of PEMEX at stake

These elections are relevant for the president and for MORENA as the ruling party, because it is at stake to confirm popular support and obtain a majority in Congress to continue with mega projects such as the Mayan Train and the rescue of PEMEX, the Mexican state oil company.

The Mayan Train is a new railroad project that encompasses the Yucatan Peninsula and revitalizes passenger trains, abandoned early 2000 nationwide in a neoliberal wave, when these were considered unprofitable.

PEMEX is the national Mexican state oil company that created 75 billion dollars of revenue in 2019 and is believed to contribute one-third to the Mexican state budget. During the last years the company has fallen into financial stress due to oil robbery from pipelines, wrong investment and the lack of it, as well as the liberalization the Mexican energy market. President Lopez Obrador has made it one of his main topics to save the PEMEX.

In addition, presidential politics of continuing with direct support for historically marginalized people, labor reforms such as ending outsourcing, or discussion and progress of the nationalization of drugs such as marijuana will indirectly be confirmed or rejected by the electorate.

Since these elections are intermediate and there is no competition for the presidency. There is the possibility of a low participation of the citizens, however, and the results will be very relevant to know if the population continues to support the vision and project of the ‘4th Fourth Transformation’, as President Lopez Obrador names it, or whether the right-wing parties get enough support to take away the majority in Congress from the president.

Foreign policy: does the Mexican population want a government that looks more to the South?

In terms of foreign policy, the US presidency had never faced a Mexican president who would have won with more than 30 million votes. Therefore, these elections will possibly endorse that the Mexican population wants a left-wing government that should start to look more to the south of the continent.

Finally, it is important to highlight that these elections take place in a context of persistent violence, since more than 80 candidates for various positions have been assassinated or disappeared throughout the country.