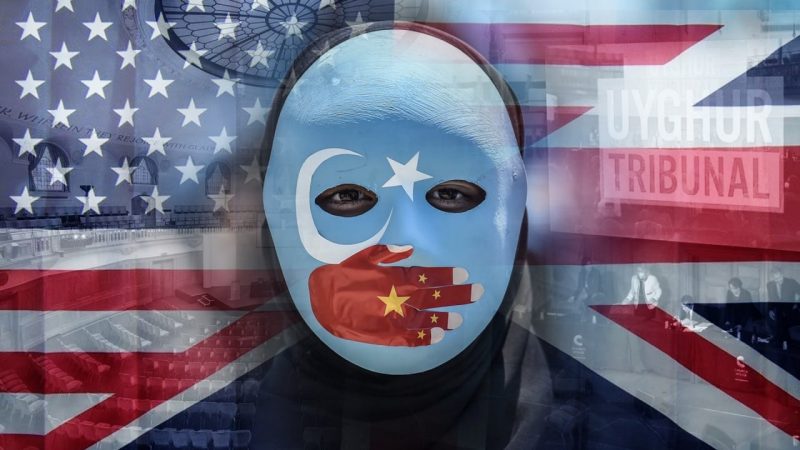 The so-called Uyghur Tribunal, which accuses China of committing ‘genocide’, has started in London. Experts evaluated that this tribunal has no legal foundation and cannot be taken seriously.

Dolkun Isa is the Head of World Uyghur Congress, which is funded by the CIA-backed National Endowment for Democracy (NED) with thousands of dollars. Isa has received NED Democracy Award in 2019. Isa has applied to the English lawyer Geoffrey Nice in June 2020, to open a case based on the accusation of genocide taking place in the Xinjiang Uyghur Autonomous Region.

Geoffrey Nice is a lawyer at the International Criminal Court who previously had led the attempts to judge the President of Yugoslavia, Slobodan Milosevic on alleged crimes in the Bosnian War, and claimed that the Syrian President and Syrian government were war criminals. Now, with the appeal of Isa, Nice has organized the convention of a tribunal in London against China with the accusation of genocide.

While the so-called Uyghur Tribunal, convened on 4 -6th of June, claims to be an ‘independent, civil court’, its website also states that the court’s decision has no legal effect but aims to pressure China with the convention’s results. Also, it is stated that the so-called court will encourage public institutions and private companies to review their relations with China, promoting the imposition of sanctions against the country.

While the attorney Nice admits that they opened the case “to judge China on the accusation of genocide” in a civil court instead of the international court, because it is not possible to do otherwise, their website makes the following statement:

“There is no such possibility not least because China/the PRC, although a signatory to and ratifier of the Genocide Convention, has entered a reservation against ICJ jurisdiction. There is no known route to any other court that can deal with the issues before the tribunal.”

Besides Geoffrey Nice, other members of the so-called tribunal also draw attention.

Hamdi Sabi is one of the counsels of the so-called tribunal counsel. He is an Iranian attorney who has left his country and moved to England after the Iranian Revolution. Sabi has represented Americans in more than 40 court cases between Iran and USA. He describes himself in his own book as follows: “Hamid Sabi has been active in human rights issues involving Iran and has co-operated with human rights organizations and activists.”

Aarif Abraham, is another advocate of so called tribunal. He is and international human rights attorney who organized a webinar about Turkey’s neglect of human rights after July 15 coup attempt. Abraham wrote an article in his blog and indicted that European human rights courts are facing dictatorship, nationalism and intolerance by its member countries. He presents Turkey and Russia as examples and states that they have lost their progress on the improvement of the rule of law.

Abraham states that Turkey has regressed from the reforms made in the early 2000s and that Russia has returned to its traditional values against western liberal norms.

The abovementioned people also provide policy proposals to British governments and the US. Their activities and affiliations help to understand the so-called tribunal’s ideological view and display this organization’s favored side, although it claims to be impartial.

The chair of the so-called Tribunal, Geoffrey Nice announced that the court would start with witness hearings. When we checked the witness list on their website, we noticed Sayragul Sawutbay right away. In a published statement, Sawuthbay claims she was taken to a concentration camp labeled as ‘training center’ and was tortured there because of her different ethnicity and her husband had taken refuge in Kazakhstan.

But the Chinese foreign ministry stated the following:

“Sayragul Sawutbay is suspected of fraud. To flee justice, she crossed the border illegally into Kazakhstan. She never stayed in any vocational education and training center in China, and was never detained before her illegal escape. Her words about seeing people tortured cannot be true.”

Dolkun Isa, Chair of the World Uyghur Congress that leads the anti-Chinese separatist campaign internationally, is also an important witness on the list. The organization receives hundreds of thousands of dollars of funding every year from the NED foundation, one of the rare institutions that receive a share from the US budget.

Dolkun Isa also is known to have organized various terrorist attacks in the Xinjiang region. Including the 2009 terrorist attack in Urumqi when 197 people died and 1700 people were injured. Dolkun Isa claims in his testimony that his mother was taken to a concentration camp and murdered. But the Chinese government states that his mother died from leukemia in the hospital.

The so-called witnesses’ sided and false declarations are another indication that this tribunal is unreliable, politically motivated and illegal.

Experts’ evaluation: The Tribunal is illegal

We asked experts to evaluate this organization gathered in London in the context of international law and foreign policy. Vatan Party Deputy Chairman, attorney Mehmet Cengiz and the Professor at the Yeditepe University, Emin Gürses evaluated so called Uyghur Tribunal.

“You can’t convene as tribunal as you convene an association“

The attorney Mehmet Cengiz stated that, as imperialist forces did to Turkey about so called Armenian genocide, they are lying about China too, when they claim that China is committing a genocide against Uyghurs in the Xinjiang region.

Mentioning that some lawyers in Britain came together and established a court, accusing China to commit a genocide against the Uighurs, Cengiz stated “lets us emphasize firstly: a court cannot be established as an association”.

“This ‘tribunal’, which is tried to be financed with donations, is a ‘mechanism to produce lies’, as also the rightly stated by Chinese authorities. The jurisdiction over accusations of ‘genocide’ rests within the courts of the concerned country or the International Criminal Court, to which the countries as a signatory part. This is clearly stated in international law, international agreements and international law rulings. The ‘Uyghur Tribunal is an illegal organization established just as a kind of ‘association’, has no jurisdiction at all.

“Besides, the Article 4 of the constitution of the People’s Republic of China states the following: “All nationalities in the People’s Republic of China are equal. The State protects the lawful rights and interests of the minority nationalities and upholds and develops a relationship of equality, unity and mutual assistance among all of China’s nationalities.” Article 36 confirms that every citizen has freedom of religion and belief, emphasizing equality before the law. The state makes sure that all 55 ethnic minorities are represented in the National People’s Congress. This includes also very small ethnic minority groups, which are secured at least one representative.”

“Targeting the struggle against terror”

Cengiz compares the genocide lies brought against Turkey and China and emphasized that Turkey faced these in its fight against the terror group PKK, while China faces the same lies when fighting against the US-supported Turkistan Islamic Party. He continues:

“The terror group named Turkistan Islamic Party has organized thousands of terror acts in the Autonomous Region of Xinjiang-Uighur between 1990 and 2016. A lot of people have lost their lives. According to official Chinese government reports, a total of 1588 different terror cells were detected, 12995 terrorists detained and 2052 weapons confiscated since 2014. The infiltration of terror groups into the region was effectively prevented by strong measures of security, which are now labeled as ‘genocide’. Public security has been safeguarded. This is the reason for the whole theater right now.”

Professor Emin Gürses has also commented on the so-called Tribunal in London, saying “this is not a court but actually an investigation gathering”. Gürses stated the following:

“The hall for the Tribunal was provided by the Council of London. It is not easy to get this hall. It is obvious that London also supports the event. If you take a look at the tribunal’s composition, then you will see that the majority are academics with ties to intelligence agencies. This is not a court, it has no jurisdiction and its decision has no validity. They also state this themselves.”

“The International Criminal Court is established under UN leadership in the 1990s. China does not sign the corresponding international agreement and is nor a party to it. If there is an international crime, it needs to be brought forward in the United Nations. Here, China has vetoing power. But this tribunal again has nothing to do with the UN. You cannot call this a court. In Britain, they are used to establish tribunals such as this. For instance, they decide in such tribunals that they will not pay back the money that Venezuela had deposited in Britain. They say they don’t recognize the Venezuelan Government. Can such a verdict be made? Can a court lay hands on the money of a different country?”

“No reputation nor authority”

Gürses adds that such a court can also not established concerning China, because it lacks any authority to judge on these matters. He says that the goal is to create public opinion and corner China. Gürses also hints to the British policy concerning Hong Kong and states:

“I have lived in London for more then 10 years and witnessed several of such gatherings. Britain never permitted a gathering or tribunal on the IRA Question, but allowed all kinds of gatherings concerning separatist terror organizations in other countries. They used to organize several reunions on the PKK. There is no ethics in the West in these matters. Therefore, this gathering does not constitute a judicial court or tribunal but a political reunion. It has no reputation or authority at all.”

The Spokesperson of the Chinese foreign ministry, Zhao Lijian stated in press conference that the Uighur Tribunal does not constitute a true court representing the Uighur people but a mechanism to create lies.

Claiming that the tribunal’s main purpose was to interfere in Chinese domestic policy and prevent China’s development, the spokesperson added that this illegal organization’s attempt to convene a tribunal does not only spread false accusations on China’s Xinjiang Region but also violates seriously international law. He added that this tribunal constitutes an insult to victims of genocides that truly happened in the history.