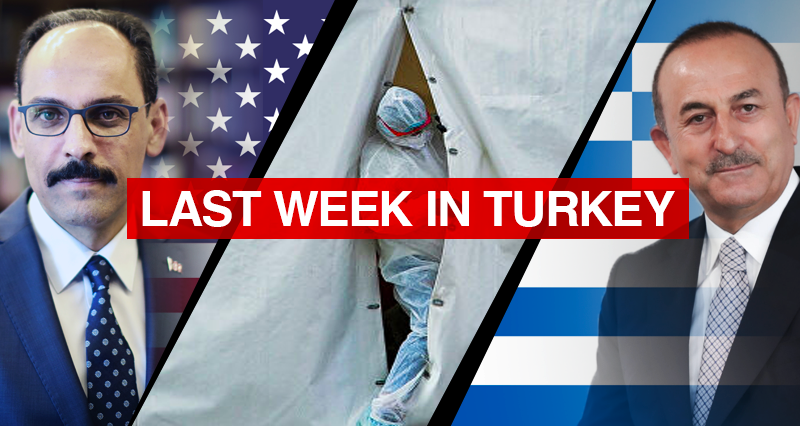 Last week, the public agenda in Turkey has been bust with three main topics.

The first topic was the Turkish Minister of Foreign Affairs Mevlut Cavusoglu’s visit to Greece, where many issues were discussed with his counterpart.

The second was a meeting between a delegation from the US Department of the State and Turkish Presidential Spokesperson Ibrahim Kalin, where bilateral relations and regional issues were discussed.

The third issue was the ongoing vaccination efforts and the gradual normalization process amidst the Coronavirus pandemic.

Turkish Foreign Minister Mevlut Cavusoglu has begun his travels to Greece with an unofficial visit to the northeastern province of Thrace on Sunday, where most of Greece’s Turkish minority resides.

The official part of Cavusoglu’s trip began on Monday morning, when he met with his Greek counterpart Nikos Dendias and Prime Minister Kyriakos Mitsotakis.

Cavusoglu arrived by plane at the Greek city of Alexandroupolis (Dedeagac) on Sunday and proceeded to the city of Komotini (Gumulcine), where a large part of the Turkish minority resides.

Both countries expected the visit to be relatively low-key and to avoid the tensions generated in Dendias’ visit to Ankara in April. The two ministers had traded barbs then and enlisted their country’s grievances against the other in a rare public exchange of accusations.

Greek officials view the visit as preparing a meeting between Mitsotakis and Turkish President Recep Tayyip Erdogan in mid-June, on the sidelines of a NATO summit. The hope is that this summer will be less tense between the two neighbors than the previous one, when clashes over the maritime zones and search energy resources dominated.

Greek and Turkish deputy foreign ministers held talks on many issues, such as the maritime disputes in both the Eastern Mediterranean and in the Aegean, issue over the island of Cyprus and a potential cooperation between the countries in their Covid-19 vaccine programs.

“Greece should avoid using the EU card against Turkey over and over again, and embrace the current positive momentum”, the Turkish Foreign Minister said in an interview to the Greek media on Sunday.

“Only Turkey and Greece can solve the outstanding problems, not the EU,” said Mevlut Cavusoglu.

He said that he is always optimistic about good neighborly relations between Turkey and Greece.

“As two neighbors, we are destined to live in the same geography. Therefore, we should define our relationship with cooperation rather than conflict. It is in our hands to determine our destiny and the way forward”, he said.

The minister said that Turkey is ready to discuss any controversial issue with Greece.

“However, Greece should give up the ‘Map of Seville’. I must reiterate that it is a mistake made by the Greeks to think that Turkey will be limited to very small parts of the Aegean and Mediterranean coasts only.”

Cavusoglu highlighted that the Turkish seismic research vessel Oruc Reis carries out its activities at locations within the continental shelf of Turkey.

“We are determined to protect the rights of both Turkey and Turkish Cypriots in the face of the unilateral and maximalist claims of Greece and Greek Cypriots.”

Recalling their calls for dialogue to alleviate the tense situation in the Eastern Mediterranean, Cavusoglu emphasized that these calls were ignored by Greece.

Cavusoglu has also spoken about the tensions between Greece and Turkey, over the disputes in the Aegean Sea. He stated that they respect the UN Convention on the Law of the Sea and the sovereign rights of each country.

“The Aegean Sea has its own features. The delimitation of the continental shelf and the Exclusive Economic Zone are not the only problems between the two countries. The reality is that in a theoretical situation where we would only confine the continental shelf and the EEZ, we would not be able to solve all the outstanding problems and we would continue to have problems. That’s what we want to avoid,” he said.

The Black Sea or the Ionian Sea is an example of such an approach, he said.

“However, with 12 nautical miles of territorial waters in the Aegean Sea, freedom of navigation will be seriously affected from the outset. We cannot allow such an extension.”

“The dispute over the 1923 Lausanne Peace Treaty and the 1947 Peace Treaty over the legal status of islands, islets and reefs and demilitarized Greek islands cannot be isolated or ignored,” he added.

“As I said, our ultimate goal is to solve all the problems with Greece and not just save the day, but reach a permanent solution.”

Also speaking on the Cyprus issue, Cavusoglu said that the vision of the Turkish side is to establish a working relationship between the two states on the Island on the basis of sovereign equality and equal international status.

“We should all learn from the failures of the past. Insisting on old UN Security Council resolutions can only get us into a vicious circle,” he said.

He stressed that therefore the parties need to “chart a new path forward” with a realistic, constructive and open-minded approach.

The ministers have also discussed potential cooperation areas. Turkey and Greece have agreed to recognize each other’s COVID-19 vaccine certificates, the foreign ministers of the two countries announced on Monday.

“The agreement we reached today will mutually contribute positively to our tourism sectors,” Mevlut Cavusoglu said at a joint news conference with his Greek counterpart Nikos Dendias in Athens.

The Greek foreign minister said that the two sides also agreed on a list of economic cooperation programs.

Turkey has started to work on concrete projects with a focus on action and cooperation with the Greek side and the two countries agreed on 25 items in the list of areas of cooperation including in transport, energy, environment, tourism, and trade, Cavusoglu said.

He said Turkey is ready for dialogue without any preconditions to improve bilateral relations with Greece.

“We agreed to resolve differences within the framework of good neighborly relations, international law and respect for mutual interests,” he said.

Cavusoglu said the fifth round of meeting on confidence-building measures between Turkish and Greek defense delegations is scheduled to be held in Turkey’s capital Ankara.

Top Turkish and the US officials have discussed the bilateral relations and the regional issues, on May 29th in Istanbul.

In a meeting held at the Dolmabahce Office, Turkish presidential spokesman Ibrahim Kalin and the US Deputy Secretary of State Wendy Sherman have discussed the agenda of the upcoming NATO summit on June 14th.

They have exchanged views on the topics which Turkish President Recep Tayyip Erdogan and his American counterpart Joe Biden are expected to discuss on the sidelines of the NATO summit in Brussels.

Kalin and Sherman have come to a conclusion that Turkey and the US should continue joint efforts to maintain peace and stability in the regions such as Afghanistan, Syria, Libya, Nagorno-Karabakh and Ukraine.

Expressing their satisfaction over the cease-fire in Palestine, the officials stressed that concrete steps should be taken for a permanent peace within the framework of two-state solution.

On Friday, a senior US official said that the US has presented “alternatives” to Turkey in order to lift sanctions imposed on the country over the acquisition of Russian-made S-400 missile systems.

“We have offered alternatives to Turkey, they know exactly what to do if they want to get out of these sanctions,” US Deputy Secretary of State Wendy Sherman said in a televised interview.

Sherman’s statement came as she visited Ankara in the first such diplomatic trip made by a member of the Biden administration.

“Turkey is well aware of the steps it needs to take,” Sherman said in televised remarks.

“We have talked about ways to take them, and this will be a decision for Turkey to take.”

However, a Turkish official told in an interview that Sherman had not brought forward any new proposals.

“They still want Turkey to move the S-400 systems out of the country or return it,” the official said.

Multiple Turkish officials said in the past that Ankara was not considering the removal of the system from the country since it was a done deal and there was no turning back.

Vaccination Efforts and the Normalization Process amidst the Covid-19 Pandemic

Turkey has begun a gradual normalization process on May 17th after the 17-day lockdown that significantly brought infections in the country down.

About the gradual normalization following a nearly three-week lockdown, President Erdogan said the “relative decrease” in the number of cases and deaths has continued “significantly,” indicating, “the measures have achieved their purpose.”

And until June 1st, the country enforced weeknight curfews from 21.00 to 05.00, while weekends were under full lockdown.

On flexible working hours in public institutions, Erdogan said it will continue until a new regulation is issued.

On Monday, Turkey has eased some of the public gathering restrictions aimed at curbing the spread of coronavirus.

Addressing reporters following a Cabinet meeting in the capital Ankara, President Recep Tayyip Erdogan said that the curfew will be imposed from 22.00 to 05.00 on weekdays and on Saturdays from the month of June.

Lockdowns on Sundays will still remain until further notice.

Restaurants and cafes will serve in-person between 07.00 and 21.00, while delivery services will continue until midnight. Tea gardens, public football fields, gyms and amusement parks will also begin to operate as of Tuesday between 07.00 to 21.00 except for Sundays.

Meanwhile, indoor and outdoor wedding ceremonies will be allowed in line with virus rules.

The restrictions could be reset according to the virus-related case and death tolls and the vaccination process, he added.

Erdogan had also underlined that his government is in an “intensive preparation” to bring the “highest possible amount of different vaccines contracted” such as BioNTech, Sinovac, and Sputnik V to Turkey in June and to give them quickly.

“We will do whatever necessary to turn June into a month of vaccine mobilization,” he said.

On national virus vaccine studies, Erdogan said: “Hopefully, we will have our own vaccine before the end of this year.”

Turkey will gradually restart in-person learning for primary school students as of June 1 in line with its efforts to return to normalcy, the county’s national education minister said on Monday.

He said that in-person learning will resume in villages and sparsely populated settlements for five days a week. “The 2020-2021 academic year will end on July 2nd”, he added.

Turkey has so far registered 47,527 deaths from COVID-19, while over 5.1 million people have recovered from the disease. There have been over 5.24 million confirmed cases in the country.

Turkey has administered over 29.06 million vaccine doses since launching a mass vaccination campaign in mid-January, according to official figures.

The ministry also confirmed 6,493 new coronavirus cases, including 596 symptomatic patients, across the country in the last 24 hours.

Turkey’s overall case tally is now over 5.24 million, while the nationwide death toll has reached 47,527 with 122 new fatalities.

As many as 9,582 more patients won the battle against the virus, raising the total number of recoveries past 5.11 million.

Over 54.13 million coronavirus tests have been done to date.

The latest figures put the number of COVID-19 patients in critical condition at 1,339, down by 51 from Sunday’s count.