The US’, France and UAE’s destabilizing operation 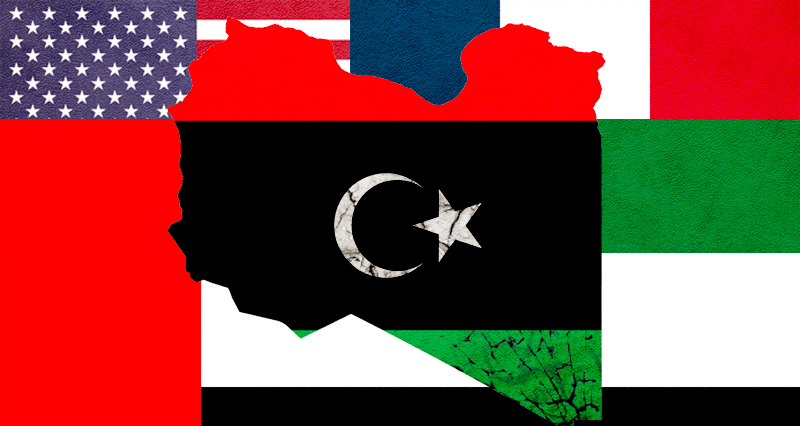 The United States, France, and the United Arab Emirates (UAE) have jointly started to create a new zone of instability in Southern Libya. And it is certain that this new center of chaos will not only threaten the North Africa, but also the Eastern Mediterranean and even the entire Middle East. They are preparing new areas in Libya’s southern border region and also near Lake Chad that will serve as operation bases for coming terrorist activities. If finished, the terrorists would on that way obtain a corridor that will stretch to the Eastern Mediterranean, through Libya. They would also be able to paralyze a wide area in the Sahel region, reaching from Nigeria all the way to Sudan.

The southern neighbors of Libya, such as Sudan, the Central African Republic (CAR), Chad, Niger, and its adjacent Nigeria are already observing some destabilizing activity in this regard. A very dangerous armed group that numbers in thousands, whose members have all survived in the region through pillaging and violence, has started to appear with the expansion of the terrorist networks, neo-colonialist policies and the regime change in Sudan.

Another factor is the United States’ support for purging Omar Bashir supporters from the Sudanese Army and Washington’s support for the reduction of the nation’s military power. This could have the result that existing armed groups recruit new members, or even completely new armed groups emerge.

The number of armed militias in the region has currently reached 50,000 as of today. It is estimated that this number can rise potentially up to one million.

Libya’s oil-rich south is a true magnet for these kinds of militias. The United States, France and the UAE find a fertile ground in the given conditions to weaken the standing of countries such as Turkey, China, and Russia and maintain their influence.

The United States is the main force behind the region’s destabilization. We can summarize America’s goals in the medium term as follows:

2. To resist growing initiatives of the states that have recently shown up in Libya, i.e. China, Turkey and Russia, in the entire Sahel region and in the Central African Republic (Russia’s military initiatives, China’s economic initiatives and Turkey’s initiatives in the area of military, diplomacy and economy).

3. To fortify US military presence in Africa on the excuse of a new so-called “war against terrorism”.

4. To increase control over French politics by dragging Paris into this joint coalition.

And Washington DC’s long-term goals are as follows:

1. To create a pressure of migration and terrorism against Europe as an alternative geopolitical center.

2. To create the image of “heroes fighting against terrorism” and to gain the title of “the only superpower that can deal with the threat of terrorism”, by creating a so-called “war on terrorism” in the region and by deploying military force.

3. To take control of the natural resources in the Sahel region and in Africa in the long-term geopolitical conflict with China.

4. To ensure the redistribution of spheres of influence in North Africa, Sahel, and central Africa. In result, to push back the positions of its former allies, including France.

5. To put pressure on the countries in the Eastern Mediterranean by destabilizing Libya. To prevent the implementation of the Agreement on Delimitation of Economic Exclusive Zones between Ankara and Tripoli, signed on November 27th 2019. To break the initiative of Turkey, which is a key player in Libya, under the pretext of fighting against the threat of terrorism.

The United States may also try to involve Turkey in its plans in the medium term in order to gain maneuver capacities in Western Libya. The American policies will take shape in the form of the principle of “divide and conquer”. Washington will try to take advantage of both entities in Libya, the Eastern and the Western, will try to reach agreements with both of them in order to prevail over its rivals in foreign policy.

The position of France and the UAE

The French interests in the region can be summarized as “protecting its own influence in Africa against China, Turkey and Russia”. The UAE aims to influence the prices of the energy resources on the global market. The long-term goals of the US would also not serve the interests of its current allies Paris and Abu Dhabi.

It should be noted that after the end of the war against Haftar, some groups in Western Libya, which are under minimal control of the Government of National Accord (GNA) and the newly formed Government of National Unity (GNU), were left disbanded. Osama al-Juwaili, the leader of the al-Zintan Military Council, is claimed to have moved some of these groups to the south.

There are also Tubu and Tuareg militias present in the south, near the border. The Tuareg militia is led by Ali Kanna, a general from the Ghaddafi’s Army who managed to lead the militia into cooperation with both the Haftar forces and the GNA. He is also in contact with the Tuareg militia groups in Mali (he has fought on their side during the 2012 conflict) and Niger.

The armed groups of Chad, usually consisting of Tubu representatives, have also gained a foothold in Libya:

Front for Change and Concord in Chad (FACT): They have remained neutral in their relations with General Haftar since 2017. In April 2021, the Chadian President Idriss Déby was killed in an attack made by FACT.

The Military Command Council for the Salvation of the Republic (CCMSR): They were linked to Osama Juwaili and have supported the GNA during in the Libyan Civil War.

It won’t matter under these circumstances whether these groups act together or fight against each other. The main aspect is to create an environment of chaos that will serve as a pretext for US military intervention. The surge of armed groups in the region, the smuggling of oil and drugs, cross-border human trafficking or the fight over oil resources can be the cause of such new instabilities.

Following the killing of Idriss Déby and the beginning of power struggles between various Chadian groups, the creation of a situation of instability and chaos in Chad has become a true possibility. If that happens, a wide region from the Northern coasts of Libya to the border of the CAR controlled by armed militias may emerge on the map.

The terrorists may control the large territory ıf two different states with such rich natural resources as oil and the gold reserves of the Tibesti plateau, which they can later use to finance their terror attacks.

The weakening of Chad will also create suitable conditions for strengthening and reactivation of al-Qaeda and ISIS in the Sahel region. It needs to be remembered that, the Chadian Army had been one of the main forces capable to cope with extremists previously.

And now, Boko Haram and the Islamic State’s West African Province (ISWAP) are actively trying to gain a foothold in the Lake Chad region.

The Emirati secret service has been active in Sudan, especially after the overthrow of Omar al-Bashir. There is some evidence that the UAE has attempted to recruit mercenary fighters in Sudan, who are to be sent to the conflict in Libya. In November 2020 for example, the Emirati security company Black Shield Security Services, has sent Sudanese mercenaries to the conflict in Libya, under the pretext of “buying the services of a local security company operating in Sudan”.

The latest report (2020) of the UN Panel of Experts on Sudan points out that these Sudanese armed groups do not only have the intention to stay in Libya, but also to further strengthen their own build-ups (an increase in arms stockpile, transport vehicles and number of fighters).

On the other hand, the Niger Army and security forces have not achieved a significant success in the fight against such groups as Boko Haram, Jama’at Nasr al-Islam wal Muslimin (JNIM) and the Islamic State in the Greater Sahara (ISGS). The consolidation of the US’ and French forces in Niger encourages these militants to shift their activities closer to the Libyan border.

The defeat of the anti-government militias in the CAR also moved these to the north, towards the Lake Chad. Chadians meanwhile are taking actively part in the actions of these groups. The representatives from the Fulani people also play a major role in the activities of these Central African groups. Other extremist organizations in the Sahel region are also quite active. The Fulani community is a nomadic ethnic group living in the Sahel region. Like the Tuba and Tuareg communities, they also have cross-border characteristics, and the deportation of them from the CAR will result in them searching for new bases in the Sahel region.

The Central African Patriotic Movement (MPC) on the other hand includes a significant number of Chadian immigrants and representatives from the Fulani people. The Leader of the MPC, Mahamat Al-Khatim had also previously served in Chadian Military Intelligence Service.

What needs to be done?

In summary, both objective and subjective reasons (the activities of the United States, the UAE and France which especially support some certain groups within the CAR), turn southern Libya into the weakest link in the rapidly destabilizing chain of Sahel region.

To prevent this, interventions in both medium and long-term are needed:

1. Strengthening of ties to the Libyan Government of National Unity in order to eliminate American influence agents. Providing aid to Libya for the elimination of armed regional militias and the build up of a National Armed Force.

2. Strengthening communication with the Transitional Military Council of Chad. Support to strengthening of the borders among the neighboring countries.

3. Increasing Turkish communication with China and Russia especially concerning the strategy in Libya and the Sahel Zone. And finding a common ground with these countries in preventing the devastating policies of the United States and its allies and evolving negative tendencies in the region.