Moldova At The Crossroads 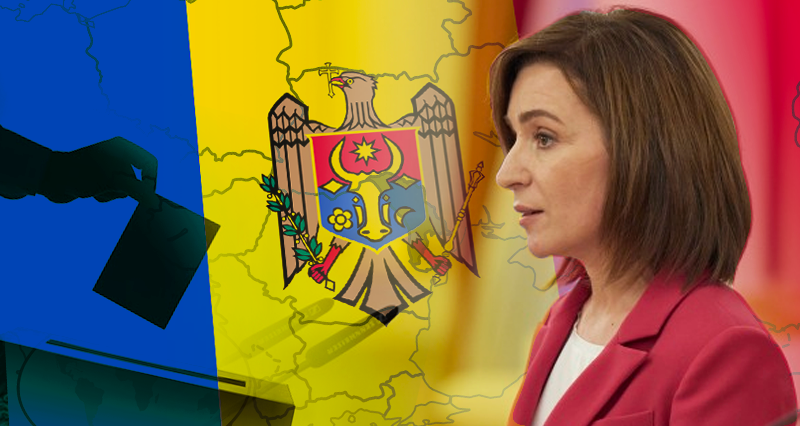 In Moldova, which is the most unstable country in Europe, President Maia Sandu last month dissolved the parliament. The early parliamentary elections will be held in July 11th. These elections will have great significance not only on this small country, but also on the balance of power in the whole Eastern Europe.

As I mentioned in a previous article titled “A New Era in Moldova” Moldova, in spite of its small territory (33.846 km2) and small population (approximately 3,5 million people) is one of the main conflict zones between the West and Russia.

This former Soviet country’s population has been divided mainly into pro-Western and pro-Russian groups. The frictions between those two political camps cause permanent political crises. It shall suffice to remind that the country had not been able to elect a president for 2,5 years between 2009 and 2012 due to these frictions. Pro-Russian parties and candidates have been supported by Russia, while the EU and the United States apparently support the pro-Western candidates and parties. The three Eastern European countries, namely Belarus, Ukraine and Moldova have some characteristics in common: All three of them are subject to the power struggle between Russia and the West and none of them is member of the EU or NATO. In addition, the domestic political struggles in these three countries are largely part of the general struggle of power between Russia and the West.

The problem of national identity and statehood

In addition to the political partition, there is a serious problem of national identity in Moldova. Moldovans are of the same origin with Romanians (Romanians are of Latin origin, whose ancestors had settled to the present day territories in the 2nd Century A.D. and, despite the fact that they have been living among Slavic nations for about 2 thousand years and adopted Orthodoxy unlike the other Latin nations, they still have managed to preserve their Latin identity). However, the present day Moldovan territories (the then Bessarabia) were conquered and annexed by Russia in 1812, and since then, the people, who lived on the eastern shore of the River Prut (i.e., in Bessarabia), fall apart from their kinsmen, who lived on the western shore of the River Prut.

While the territories of present day Romania developed Romanian nationalism in the 19th century, the people of Bessarabia fall away from this nationalist movement. In the same way, the Moldovans were away from the westernization process of the language, which was introduced by the Romanian Principality in the 1860s’.

Bessarabia experienced Romanian rule from 1919 to 1940 and then from 1941 until 1944. This period is perceived with negative emotions by most of the Moldovans. From 1944 until the collapse of the Soviet Union, Moldova was one of the 15 constituent republics of the Soviet Union. Soviet authorities dealt with the creation of a Moldovan national identity. Consequently, today, a great part of the Moldovan population perceive itself as belonging to a Moldovan nation, while again a considerable share of the population (especially many of the pro Western people) perceive themselves Romanians. A considerable part of those, who perceive themselves as Romanians, support the incorporation of Moldova to Romania. Although this unionist tendency does not dominate in the Moldovan society, it has been on the rise in the recent years. From this point of view, the question is also related with the statehood.

The problem of territorial integrity

In addition, one of the five breakaway regions in the former Soviet countries is in Moldova: Transnistria (the other four regions are Abkhazia and South Ossetia of Georgia, Nagorny Karabakh of Azerbaijan and the Donbass region of Ukraine). Transnistria, located in the east of the country and on the eastern bank of the River Dniester, is mainly inhabited by Slavic population (Russians and Ukrainians). This region, at the beginning of the 90s’ (during the turmoil at the time of the dissolution of the Soviet Union), came into conflict with Moldovan forces and, having the support of the Russian Army, they managed to establish control on that region and expel Moldovan forces from there. For almost 30 years, that region has been beyond the control of the Moldovan Government. The presence of Russian soldiers in that breakaway region makes this issue an important security problem for Ukraine as well, since Ukraine is on the east of Transnistria.

The presidential elections: A pyrrhic victory for the Pro-Western forces

In the recent presidential elections, which were held in November 2020, the pro-Western candidate Maia Sandu won against the then president and pro-Russian candidate Igor Dodon, who is also the leader of the Moldovan Socialist Party.

Maia Sandu’s victory was a result of a few factors: 1. Many people thought that during Dodon’s rule, little had been done in order to fight against poverty and corruption. 2. While Maia Sandu was the only pro-western candidate and almost all of the pro-western electorate had supported her, the pro-Russian electorate was divided among a few candidates and most importantly, the third candidate in the first round of elections, the pro-Russian Renato Usatii had negotiated with Maia Sandu before the second round of the elections and after that, he called his electorate “not to vote for the corrupt regime” (referring to President Dodon). Although he did not call his electorate to vote for Sandu, his call for boycott in the second round simply deprived Dodon off the support of the pro-Russian electorate of the northern regions of Moldova. 3. The Moldovan diaspora in Russia was not active in the elections (partially because of the reluctance of Russia to give active support to Dodon), while the Moldovan diaspora in European countries (who have pro-western orientation) were mobilized and have massively voted in the second round of the elections.

Nonetheless, Moldova has a parliamentary system, thus, the president has limited power, while most of the power belongs to the parliament. For this reason, after coming to power, Sandu finds herself at odds with the parliament, which is dominated by her opponents (mainly by the party of the ex-president Igor Dodon, the Party of Socialists of the Republic of Moldova). Hence, in order to gain real power, Sandu would try to dissolve parliament and call for early elections. However, according to the constitution, the parliament can only be dissolved if it fails to convene for three months or if it fails to approve a new government. In order to facilitate the situation, the Prime Minister Ioan Kiku resigned already in December 23rd. Maia Sandu, on February 11th nominated the Vice President of the Party of Action of Solidarity (the party of Sandu) as candidate for the prime ministry. As it was expected, her candidacy did not receive support from the parliament.

The conflict among President, Constitutional Court and Parliament

Why are these elections so important

If Sandu’s Party of Action and Justice wins the early parliamentary elections, it will mean that the foreign policy vector of Moldova will be undoubtedly pro-western (which aims at getting EU membership, closer relations with NATO and in the further future, probable union with Romania). The previous president, pro Russian Igor Dodon had completely bad relations with the Ukraine and Kyiv welcomed Sandu’s presidency. Under these conditions, the victory of pro-western forces is supported not only by Romania, but also by the Ukraine, which is the other neighbor of Moldova (Moldova has only two neighbors).

In these circumstances, victory of the pro Russian forces depends on the ability of those forces to mobilize the pro Russian electorate in Moldova and abroad (especially in Russia). This also depends on the active support of Russia for Igor Dodon. With regard to the frequent visits of Dodon to Moscow and the confrontation between Putin and Joe Biden, it can be presumed that Russia, unlike the presidential elections in 2020, this time will actively support Dodon.

The United States has started to show active interest to the politics of Moldova (previously, the inner politics of Moldova were dealt mainly by the European Union). The US Ambassador to Moldova, Dereck Hogan said that Transnistria should be under the control of the Moldovan Government and that they hope that the parliamentary elections in Moldova will help to solve this problem.

These words of the ambassador show that if the pro Western forces win the parliamentary elections, the US will exert pressure on Russia to withdraw its troops from Moldova’s Transnistria region. This will considerably affect the balance of power in the Black Sea region and Russia will fall further away from the Balkans. Thus, the outcome of the parliamentary elections of 11 July will have important consequences in the regional politics and on the chessboard between the US and Russia.