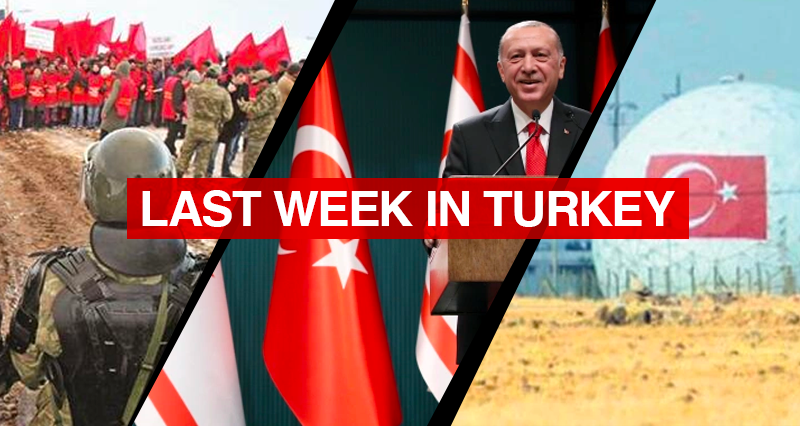 Last week, the public agenda in Turkey has been busy with 3 main topics.

First, were the statements from President Erdogan, declaring that a new dialog on Cyprus can only advance pursued by the two şndependent states and not two communities.

Second, were the reactions and protests demanding the shut down of Kurecik Radar Station in the Malatya Province of Turkey. The station is widely alleged to provide intelligence to Israel.

Third were Turkish government officials’ the statements that demanded a truce between Israel and Hamas.

Turkish President Erdogan gave an online speech at the opening ceremony of an irrigation tunnel to the Turkish Republic of Northern Cyprus (TRNC) on Saturday, commenting on the Cyprus issue.

“If there are to be new talks on Cyprus, then these should no longer be held between two communities, but between two states,” he said.

Underlining that the equal status and sovereign equality of Turkish Cypriots must be confirmed before fresh negotiations could begin, Erdogan said the latest Cyprus talks held informally in Geneva last month had been inconclusive due to the “intransigent attitude of the Greek side, detached from the facts on island.”

Erdogan said the recent unofficial 5+UN meeting on Cyprus in Geneva at the end of April marked a turning point in the struggle for independence and the future.

“As Turkey, we have fully supported the proposals made in Geneva by the Turkish Cypriot side under the leadership of my dear brother, Mr. Ersin Tatar. On this occasion, I would like to congratulate Mr. President Tatar on his leadership in Geneva and his determined stance,” said Erdogan.

“Rejecting a two-state solution means rejecting the sovereignty, equality, independence and state of the Turkish Cypriot people. Neither we nor the TRNC consent to such injustice, such usurpation of rights.

“In particular, we will never allow the Turkish Cypriots’ existing rights to energy resources in the Eastern Mediterranean be defeated,” the Turkish president said.

“We have never seen the fate of the TRNC separate from our own. The welfare of the people of Northern Cyprus, their ability to stand on their own feet and their development are our primary goals,” he added.

Many politicians in Turkey have demanded the shutting down of the Kurecik Radar Station to US use in response to the Israeli attacks over Palestine.

Stressing that the US is the driving force behind Israel, the Leader of the Nationalist Movement Party (MHP) Devlet Bahceli called for the radar station to be shut down:

“We have left relics and artifacts on every inch of Jerusalem. Jerusalem knows us well, and we know Jerusalem well. If the United States should stand against us on this, we should immediately revisit our NATO membership and shut down the bases at Kurecik and Incirlik.”

The Israeli attacks over Palestine were also on the agenda of IYI Party Leader Meral Aksener. Akşener stated that Turkey should go beyond a simple condemnation and take more concrete steps, such as shutting down Kurecik Station:

“We have not seen a single concrete step that will deter Israel to attack and make the lives of Palestinian people more peaceful. For example, we have a trade volume that exceeds 6 billion USD with Israel. Have these relationships been suspended? They were not. For example, there is the Kurecik Radar Station. Will this station be closed? No, none of this has really happened.”

In response to the cruel Israeli attacks over Palestine, the Turkish Youth Association (TGB) have gathered near the Kurecik Radar Station. The leader of the Association made a statement that the Kurecik Radar Station provides intelligence for Israel and is involved in hostile actions against Turkey itself, while adding that the base should be immediately handed over Turkey’s control.

“We are here to say that the struggle of Palestine is the struggle of Turkey. We gathered here to take more solid steps to end this Zionist regime, this imperialist blockade on Gaza and this horrible persecution. We are here to create the powerful will that will raise the victorious flag of Palestine, in Jerusalem.” the statement said. They stated that the Israeli persecution of the Palestinian people could not be looked away any longer.

Noting that if the bombs that are today dropped in Gaza are not stopped, they will be dropped on the Turkish Army tomorrow, for the establishment of the puppet Kurdistan, the statement said that “Israel is the largest supporter of the PKK/PYD and the biggest rouge behind the plans to disrupt our Blue Homeland in the Eastern Mediterranean. The United States and Israel are behind all the threats and obstacles on our lands and national benefits, in the region between the Eastern Mediterranean all the way up to Northern Syria.”

Greeting the struggle of the Palestinian people that are fighting for their homeland, the demonstrators stated that Turkey must take the lead for Palestine to be free, and declared: “Let us send these foreign troops that protect and cover the behind of Israel, in the middle of our homeland in Kurecik. Shut down Kurecik that serves Israel! Damn the Zionism.”

Statements from Turkey on the Ceasefire in Palestine

After 11 days of Israeli airstrikes on the blockaded Gaza Strip, an Egyptian-brokered ceasefire between Gaza and Israel took effect at Friday.

Turkey welcomed the new ceasefire between Hamas and Israel, adding that it hopes this pause becomes permanent.

Decrying the eruption of clashes as a result of Israel’s “illegal actions and serious provocations against the Palestinians,” a Foreign Ministry statement said it welcomes the ceasefire, and urged for it to be a permanent truce.

Saying that the main purpose must be finding a solution based on a two-state solution rather than just a temporary ceasefire, Turkey called on UN Security Council member states as well as international community to act to “completely end” the Israeli oppression.

“In order to deliver the urgent humanitarian aid needed in Gaza, it is important to ensure uninterrupted access to the region,” the ministry added.

The statement stressed that Israel must be held accountable on the international stage for its crimes and must lift the inhumane blockade imposed on Gaza in order to prevent further tragedy and sorrow in Palestine.

“The only way to find a permanent, fair, and comprehensive solution to the Palestine matter is through ending the Israeli occupation,” it said.

Turkey further expressed support and solidarity with Palestine and its people in their “rightful cause.”

On the other hand, ceasefire should be used as an opportunity to find a lasting solution to the problem on the basis of two states, Turkey’s communications director said.

“We strongly condemn the attack on the congregation at Al-Aqsa Mosque, the first qibla of Muslims with stun grenades and rubber bullets after the Friday prayer, despite the ceasefire that came into effect yesterday,” Fahrettin Altun said in a statement.

He noted that while standing with the people of Palestine in their rightful cause, Turkey will also follow violations and sustainability of the ceasefire.

Turkey will continue to make efforts for a permanent solution in the occupied Palestinian territories, he said, and reiterated Turkey’s call to the whole world to take action to put an end to Israel’s persecution and occupation.

Speaking in an interview, Haniyeh said they considered Turkey, Egypt, Iran, and Saudi Arabia as important countries in the region, adding that Turkey’s rapprochement with the said countries would affect the Islamic world and the Palestinian cause positively.

On Palestinian President Mahmoud Abbas’ decision to postpone the May 22 elections, Haniyeh said they want the elections to be held as soon as possible, stating such a move would end internal disputes in Palestine.

He stressed even if Hamas wins the elections they will create a joint government.

Ruling out any aims to dominate Palestine politically, he said they want to first and foremost liberate the occupied lands.

Touching upon the normalizing of relations with Israel by some Arab countries, he said such moves legitimize the Israeli occupation.