Tensions on the Armenian-Azerbaijani border 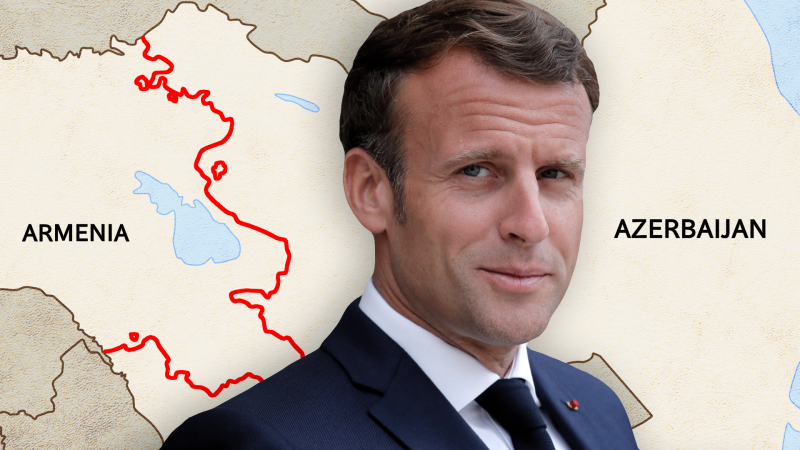 At a time when the world’s attention is focused on the Israeli-Palestinian conflict, forces in the South Caucasus are trying to escalate the situation once again. This time, Western circles are planning to create clashes in the region via Armenia.

The terms of the peace agreement signed after the 44-day Karabakh war are not being met: Armenia is reluctant to fulfill its responsibilities, and France seems increasingly interested in the issue.

Tensions are rising along the border between Azerbaijan and Armenia. The settlement of the Azerbaijani army in the provinces of Lachin and Kalbajar, which were recently liberated from Armenian occupation, has provoked enmity between the two countries. The Prime Minister of Armenia Nikol Pashinyan decided to appeal to the Collective Security Treaty Organization on the issue, claiming that some regions where the Azerbaijani army was settled are Armenian.

Obligations of the November 10 agreement

The steps taken by the Azerbaijani border guards to determine the Armenian-Azerbaijani state border and strengthen the border in accordance with the terms of the 10 November agreement caused strong reactions in Armenia. The Armenian side, which has occupied Azerbaijani territories for 30 years, is now avoiding fulfilling its obligations to return to its former borders.

According to the trilateral declaration signed on November 10, 2020, Azerbaijani border forces have been deployed to its positions with the improvement of weather conditions in the mountainous terrain and climate conditions on the Armenian border of the newly liberated Lachin and Kalbajar regions. This process is being carried out systematically and within normal parameters.

Measures to strengthen the border protection system implemented within the territorial integrity of Azerbaijan are being carried out on both sides of the border.

Since restoration of independence, there is no agreed state border between the two countries and therefore a complex technical process is currently accompanied by disputes between the parties.

It is surprising that the Armenian side reacted so strongly to this process, even making provocative statements in return. In connection with the pre-election situation in Armenia, we believe that attempts by official circles to use this issue for political purposes are unacceptable.

The noise that Armenia has raised about the situation at the border has already attracted the attention of the world and international organizations. Russian Foreign Minister Sergei Lavrov had a telephone conversation with his Azerbaijani counterpart, Jeyhun Bayramov, to discuss the issue. The parties stressed the importance of resolving all kinds of tensions through political and diplomatic means.

Later, OSCE Chairman-in-Office and Swiss Foreign Minister Ann Linde met on the phone with the Foreign Ministers of Azerbaijan and Armenia Ara Ayvazyan and Jeyhun Bayramov to discuss the tension. The parties exchanged views on the tension on the Azerbaijan-Armenia border. They stressed the importance of adhering to tripartite treaties.

The United States has also reacted to the tension. US State Department spokesman Ned Price made a statement on his Twitter account.

“We are closely following reports of increased tensions along a non-demarcated portion of the Armenia-Azerbaijan border. We understand communication between the parties is ongoing and urge restraint in de-escalating the situation peacefully.”

The suspicious concern of the French President

The reaction of French President Emmanuel Macron to this issue was also surprising. Reacting to the 30-year Armenian occupation, France accused Azerbaijan of being engaged in an occupation. France, a mediator in the settlement of the Nagorno-Karabakh conflict, has never criticized the Armenian side, but today, the French leader is brave enough to accuse Azerbaijan of occupation. What is Franche actually interested in achieving with these comments?

The problem is related to the domestic political situation in Armenia. As the June 20 parliamentary elections approach, political competition in Armenia has intensified, and both the government and opposition forces are trying to gain political dividends by focusing on the Armenia-Azerbaijan border. The forces trying to create agitation in the Armenian society by exaggerating minor technical procedures are hoping to overshadow the November 10 agreement and ride the wave of tension in Armenia. Azerbaijan is bound by the agreement in any case and, expecting the same attitude from Armenia, fulfills its obligations to the end. Armenia will not be able to achieve anything by muddying the water.

In conclusion, I want to emphasize once again that the Karabakh conflict is over and the parties are returning to the pre-conflict borders. Why does Armenia, defeated in the 44-day war and its army completely destroyed, now refuse to demarcate its borders?!

Such revanchist intentions can not lead to anything positive for Armenia and the Armenian people.

One response to “Tensions on the Armenian-Azerbaijani border”