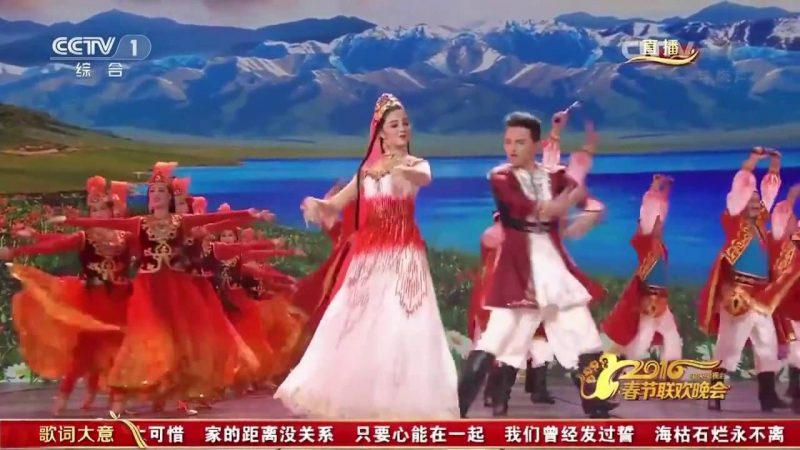 Uighurs have gained the attention of the world, their prominence is at its highest since the days of Genghis Khan. This, of course, is not because they have earned the world’s admiration or love. The reason is that the United States is engaged in a new Cold War, which the minority Muslim group has found themselves at the center of. The United States and the West have declared that Uighurs, among the 55 national minorities in the people’s Republic of China, are the group most prone to separatist plans against the Chinese state.

For many years, the United States had utilized every Tibetan it could reach, including the Dalai Lama, against Chinese rule in Tibet. However, it was unable to achieve any positive results, regardless of the work and money they invested. It was also not possible for them to successfully mobilize the Mongols, the Manchurians, or any other minorities to use for their political goals. However, since the time of the “Great Game” in Central Asia in the 19th century, the foundations of some possibilities in the Uighur and Tibetan region have been laid in league with the plans of British imperialism. The US is using them to pick up where the British left off.

Turkish artists in China from Kublai Khan till today

The People’s Republic of China, which takes up the majority of the territory of East Asia, has existed as a Commonwealth of nations for 3,000 years. A country has existed there since 1,000 BC with a map that changes in size from time to time. Central Asia, on the other hand, is the gateway of Chinese geography to Europe and Western Asia. Central Asia is a real highway between deserts and mountains. It has therefore always had a very important place in Chinese history. Because the Turk’s homeland is also these steppes, China has always existed alongside the Turks, sometimes fighting, sometimes working together, since time immemorial. They were even at the top of the Great Chinese Empire from the time of Genghis Khan, and especially during the Mongol-Turkish Confederation during the reign of Kublai Khan. Marko Polo’s travelogue contains many episodes about it.

From then on, the dance, music, and culture of the Central Asian Turks has been an indispensable element of Chinese palaces. Even in more distant places such as Bukhara and Samarkand Turkish dancers, musicians and artists were brought in and highly respected. Paintings by numerous Chinese artists adorn museums around the world on this subject matter.

Politics aside, what’s going on in the arts?

We have already discussed the political aspect of the “Uighur Issue” in great detail in the media. Now, let’s look at the artists of the Uighur Turks in general Chinese society and their place in popular culture. For those who sit in cafes in New York or Istanbul and say, “Uighurs are being oppressed, they have no rights, they are forced to beg or crawl in camps”, this will perhaps offer some perspective.

The Uighurs are mostly located in the Xinjiang region at the Central Asian gate of the people’s Republic of China. However, they also have a large number of important artists involved in the National Culture of China. We unfortunately do not hear very much about their presence, because almost all of these Uighur artists are not falling in line with US-led separatist efforts, because they know the People’s Republic of China as their homeland. For that reason, they are even accused of “treachery and collaborationism” by the “Uighurs outside” in places like New York or Istanbul. But in reality, Uighur artists are recognized in Chinese film, music, theater and dance circles as “stars” among other artists from 55 ethnic communities in China.

The PRC’s art industry is filled with thousands of artists from 55 minorities. Among them are Uighurs (Dilraba, Gulnazar), Mongols (Tengger), Manchurians (Na Ying) and many others. If, as some claim, you try to call all these minority artists “traitors”, you will find yourself up against about 1.5 billion angry Chinese citizens! This is because in popular culture, these very talented artists are accepted by the entire Chinese population, regardless of the region from where they come. It really does not bother anyone that they have risen in the field of Chinese art, except for a handful of foreign-backed provocateurs from their ethnic communities.

According to the impression created by racist-nationalist Uighur groups outside the PRC, Uighurs are an oppressed ethnic group. However, the PRC is a multinational and multicultural state. The important thing is not the city from which a famous artist comes, it’s his/her art and their skills that makes them important. According to the citizens of the PRC, for example, the most famous Uighur artist Dilraba Dilmurat is a Chinese artist. The only difference is that he is an artist with a little more exotic appeal, with a slightly more “oriental” appearance than the Han Chinese who make up the majority. But all the same, she’s from China, and she’s the most popular movie star in the entire country!

The Scottish James Bond is a British artist, but Dilruba is a traitor!

Here, let’s give two examples that will express the double standard of the West: the famous James Bond is British, but he is from Scotland. Catherine Zeta-Jones is from Wales but a British actress. Are these two now betraying the Scots or the Welsh? It is not a betrayal when they do it, but when Dilraba, the most famous artist of the Uighurs in China does the same thing, it is a betrayal according to some “so-called nationalistic Uighurs”. The only ones who express objections are the United States and Western Europe, especially the British. This is what you call a double standard.

Some of the Uighur artists admired by one and a half billion Chinese:

Let’s get to know some of these Uighur stars in the people’s Republic of China. Of course, this is just a sampling, and definitely not a complete list.

The most famous Uighur film artist of the people’s Republic of China is Dilraba Dilmurat: not only among Uighurs, not only in the PRC, but also in all Far Eastern countries. The audience of Chinese films call her “the most beautiful woman in the world”. The importance of this artist is not only due to her physical beauty, but also by the vitality she gives to the characters in the films she plays.Born in Urumqi in 1992, this young artist was ranked 11th in Forbes magazine’s 2002 favorite list.

In the life of this young Uighur actress, she has received the China TV Golden Eagle Award, The Best Supporting Actress at the Shanghai Television Awards, China-Britain’s Best New Actress rank at the Golden Phoenix Award. Dilraba is one of the most common faces on advertising programs and walls in the PRC. In 2018, she won public affection by terminating her contract with Dolce&Gabbana for their racist ads that humiliated the PRC.

Another famous Uighur actress is Gulnezer Bakhtiyar. Gulnezar, like Dilraba, was born in Urumqi in 1992.She studied film acting at the Beijing Film Academy. She won the Golden Phoenix Award. She has appeared in hundreds of films and TV series. Italian fashion giant Sergio Rossi has made Gulnezar the brand face for the Chinese and Far Eastern Market.

Like some of the other famous Uighur artists, she was born in Urumqi and studied at the Beijing Academy of Arts. After graduation, she joined the Xinjiang Art Theatre Company. She has played lead roles in hundreds of productions in both Chinese television and cinema.

Famous lyric-soprano was born in Kashgar. She was educated at the Beijing Conservatory and earned the nickname “Philomela of China”, after the Athenian King Pandion’s daughter who turned into a nightingale.

Mahire Emet is a 1987 Urumqi-born singer, dancer, model and film star. She is the lead singer of a female musical group named Gul Yaru.

Some of the examples we can give as famous Uighur male artists are:

Raxman is one of the most important TV presenters of the PRC. He was especially famous for his superstar shows Ding Dong and Sing My Song. He has also been presenting The New Year’s Gala programs of CCTV, the central state television of the PRC since 2015.

Born in 1991 in Urumqi, this famous male artist studied theater at Shanghai Tiyatro Academy with the famous Uighur female star Dilraba Dilmurat. He added his career to modeling, acting, film acting, and became one of the most famous faces of the PRC. His most recent project was the drama series “Winter Begonia”, translated in 2020 and directed by famous director Zu Zheng.

Hailing from a village in the Kashgar region, this composer-musician graduated from the conservatory in Beijing. He used traditional Uighur musical modes, maqams and styles in his compositions, while modernizing them to appeal to new audiences. The judicial songs ”Eagle of the mountain of God“ and “A Thousand Caves” are recognized as examples of the modernization of Uighur traditions.

This Uighur singer and composer from the city of Urumqi took storms in China with a group called Qetik, which he founded with his wife Pazilet Tursun. Especially following his presentation in the artistic competition program “Voice of China”, he achieved the status of a star all over the People’s Republic. He has given concerts all over the world, including in Singapore. He kept his place in the charts for a long time, especially with his album” Rock from Taklamakan”. The Chinese people liken Perkhat’s voice to Leonard Cohen, Bob Dylan and Axel Rose.