A glance at Egypt: Cairo greets Ankara’s delegate with skepticism and the true reason behind Lavrov’s visit 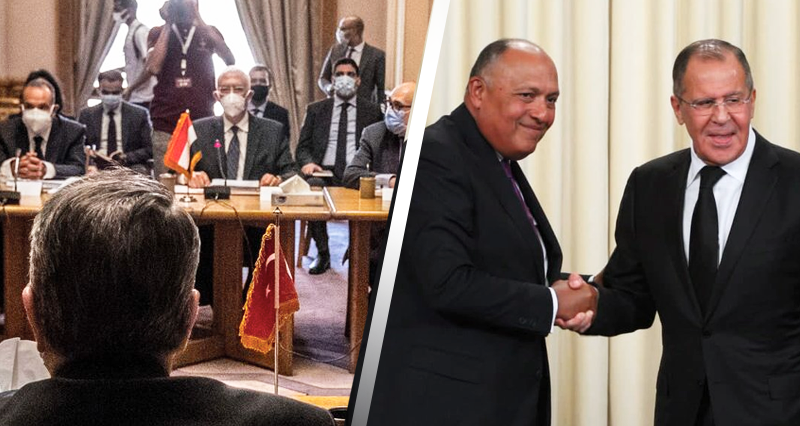 After eight years of deteriorated relations between Egypt and Turkey, a Turkish delegation consisting of diplomatic and security officials met in Cairo on May 4th their Egyptian counterparts during a two-day-visit.

The visit, described by the Egyptian Foreign Ministry as an “exploratory round of consultations” between Egypt and Turkey, was led by the deputy Deputy Foreign Minister Hamdy Sanad Loza and his Turkish counterpart Sedat Önal, a strong signal of Cairo’s skepticism toward about Turkey’s intentions.

The official page of Egypt’s Foreign Ministry issued a statement in the conclusion of the talks, describing them as “frank and in-depth” discussions, pointing out that the two parties addressed bilateral issues as well as a number of regional issues, in particular the situation in Libya, Syria, Iraq, and the need to achieve peace and security in the Eastern Mediterranean region.

“The two sides will evaluate the outcome of this round of consultations and agree on the next steps,” the statement said.

The statement leaves no doubt that Cairo is waiting for the next move from Ankara to determine its stance towards the whole concept of the reconciliation, and whether it will return to the negotiations. This was obvious in the terms used in both statements declared before the arrival of the Turkish delegation and at the end of the visit, and given that it was at first called “political consultation,” and later an “exploratory round of consultations.”

The Egyptian former Foreign Minister Mohamed Al Orabi commented on the statement saying its terms are “diplomatically disciplined” that reflect the nature of the talks that were aimed at exploring intentions, identifying trends, and building on them in the future.

“The meeting is not meant to achieve a breakthrough in the Egyptian-Turkish relations; it is a preparatory round to determine on which ground the Turks stand and their seriousness in restoring the relations with Egypt and the Arab countries,” Al Orabi told the Saudi news website Alarabiya.

The former Foreign Minister pointed out that he has heard the Turkish allegations of their “true intention” to normalize the relations since 2011, and yet nothing happened, which enhances Cairo’s skepticism, ruling out a near meeting between the foreign ministers of the two countries.

“Maybe Ankara is only seeking legalizing its current positions in Libya, Syria and Iraq,” Al Orabi added, explaining that the Turks intentionally affirmed the legitimacy of their presence in Libya hours before the visit, besides their insistence to call the Muslim Brotherhood dissidents on its soil as “political asylum seekers,” while they are wanted in Egypt under terrorism-inciting charges in Cairo.

On May 3rd, and in response to a request made by the newly appointed Libyan Foreign Minister Najla al-Mangoush from Turkey to remove its troops from the country, Turkish Foreign Minister Mevlüt Çavuşoğlu said that a departure would be “a hard thing to implement,” due to the ongoing presence of other mercenaries “who could help a march westwards again” if Haftar was to renew military activity.

“There are those who equate our legal presence … with the foreign mercenary groups that fight in this country for money,” Çavuşoğlu said.

Egypt’s demands from Turkey include the departure of hundreds of Turkish troops and thousands of Syrian mercenaries brought to Libya by Turkey, the handover of extremists wanted by Egypt on terror-related charges and ending criticisms towards the regime of Egypt’s President Abdel Fattah Al Sisi. The latter was the only demand that was met, as Ankara asked the opposition media personnel based in Istanbul to change their tone toward the former Field Marshal in March.

“The only gain from this meeting is that it happened,” the prominent pro-government Amr Adib said on his TV show aired on MBC Masr channel on May 7, adding that he does not expect great outcome from this meeting, but it least it is a step forward between the two countries.

Meanwhile, Turkish President Recep Tayyip Erdoğan commented on the negotiation round on May 7th saying: “We seek to restore historical unity with the people of Egypt.” The comments were criticized by Adib, who denounced Erdoğan’s ignorance to President Al Sisi and avoided addressing him directly in all his statements.

Worthy to mention that the Turkish Foreign Minister is paying a visit to Saudi Arabia, where he is meeting his Saudi counterpart in a first official rapprochement between the two countries since the killing of the Saudi journalist Jamal Khashoggi in his country’s consulate in Istanbul in 2018.

On the northern side of the European continent, Egypt has made a significant breakthrough in the relations with Russia, which had been embodied in the recent deals struck between the leaders of the two countries.

The first deal was made on April 22nd to manufacture 40 million doses of the Russian anti Covid-19 vaccine “Sputnik V’ per year by the Egyptian medical company Minapharm, to be followed with a second deal announced by President Al Sisi and his Russian counterpart Vladimir Putin on April 23th to resume the flights to the Egyptian resorts in South Sinai, Sharm El Sheikh and Hurghada “in the very near future.”

The flight resumption was in negotiations since six years between the two countries, amid Russian obstinacy, despite Egypt’s affirmation of applying all the safety measures to secure the Russian flights in all its airports and the Russian tourists across the nation, especially in the Red Sea resorts, following the terrorist attack that downed a Russian airplane after it took off from Sharm El Sheikh airport, killing 224 people in October 2015.

Lavrov’s visit to the old ally in the Middle East was seen as a response to President Erdogan’s reception of his Ukrainian counterpart in Istanbul on April 10th, which took place against the background of the aggravation of the situation in eastern Ukraine, according to Al Monitor.

“I will tell you straight away that we urge all responsible countries that we communicate with — and Turkey is one of them — that we strongly recommend they analyze the situation and the Kiev regime’s relentless belligerent statements, and we also warn them against encouraging these militaristic aspirations,” Lavrov said during a joint press conference with Shoukry in Cairo.

Moscow has repeatedly voiced its concern about the Turkish-Ukrainian military and technical cooperation, especially Turkey’s supplying the Bayraktar drone to Kiev.

The flight resumption news followed Moscow’s halting of tourists flocking to Turkey, due to the rise in the Covid-19 cases reported in the country.

An expert in the Russian-Middle East affairs, who spoke to United World International under the condition of anonymity, ruled out any deterioration in the Turkish-Russian relations, affirming that Turkey will remain the best ally for Russia in the region and in Europe.

“The Turkish-Russian relations are strong, they can’t be affected by the Egyptian-Russian rapprochement,” the expert with close ties to Russian decision makers told UWI, adding that Turkey’s strong stance in the Mediterranean serves Moscow’s interests, which will trigger it to seek a quick reconciliation with between Ankara and Cairo.

“Let’s not forget that Russia depends on the Turkish pipelines to transfer its natural gas to Europe,” the expert said, proposing that Lavrov’s visit to Cairo was to push forward the talks with Ankara, not the opposite.

And regarding Lavrov’s statements on the Turkish-Ukrainian rapprochement, the expert downplayed their effect, describing them as “just a diplomatic statements that can’t be translated into real actions,” adding that Russia and Turkey had different stances in Libya and Syria, however, they never stopped their strategic cooperation.

“Some analysts proposed that Egypt would replace Turkey as a holiday destination for Russian tourists, which is not true; as so far we have not seen the 7 million Russian tourists who travel to Turkey every year flocking to Egypt,” the expert added.

The expert claimed that the resumption of the Russian charter to the Egyptian resorts is a consequence of the vaccine manufacturing deal, which is more important to Moscow than the arms deal with Cairo.

“To make arms deals with Egypt is no big deal for Russia; Egypt is inherently a Soviet-armed country,” the expert told UWI, referring to the SU-35 jet fighter purchase and the permission to manufacture the T-90 tanks in Egypt.

“Russia wants to find a footing in the race of vaccination, and seeks as many countries as possible to accredit the Russian Sputnik V, which makes Russia a huge profit after rolling out the vaccine,” the researcher and expert said.

Three countries, other than Egypt, in the Middle East and North Africa (MENA) have authorized the use of Sputnik V to fight coronavirus so far, Bahrain, Algeria and the UAE. More counties are expected to follow after the Egyptian authorization and manufacturing.

In regards to the official announcement of the arrival time of the first Russian flight to Sinai, the Moscow-based expert said that it depends on the Russian government’s assessment of the safety measures in Egyptian airports, pointing out that a Russian delegate of young pro-government bloggers visited Egypt few days days ago upon the request of the Russian intelligence to check the recent developments in Egypt.

“It was not a normal vacation, it was a mission to check out the truth on the ground away from the official announcement,” he said.