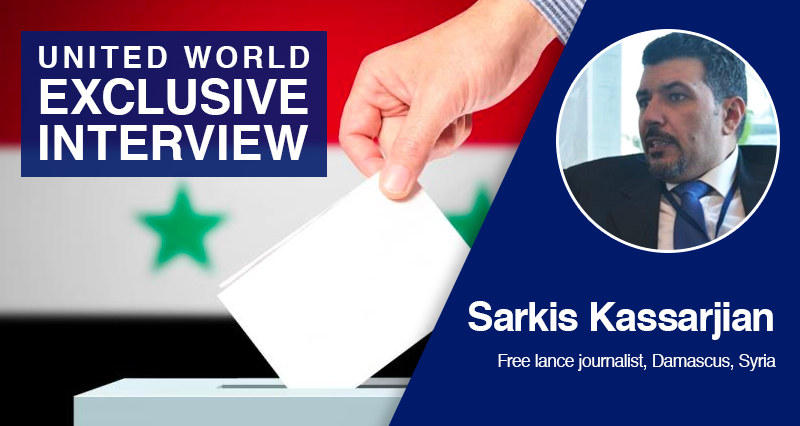 The election will take place as the Syrian civil war enters the eleventh year of conflict on May 26th. Both in Syria and International power balances are totally different from the 2014 elections. Sarkis Kassarian who has been a war reporter in Damascus and in many other conflict areas sees the possibility of the Arab world recognizing the Syrian election and This differentiates 2021 election from previous elections. According to Kassarian, Syrian society have expectations of ‘’significant change’’

In 2014, international media was publishing discussions regarding Besar Esad`s future position almost daily. Today, it looks like the question of whether Assad will be eliminated or not has been left behind. Damascus who received Iran’s support from the beginning and Russia’s support since 2015 September 30th, has managed to change the power balance highly to its benefit until 2021. Assad Government took the control of the main cities completely and sent the opposition tagged groups to Idleb  He is still waiting to resolve the conflict regarding the east of Euphrates for now. In addition to this, the country is getting prepared for the presidential election while dealing with economic crisis that caused by the pandemic.

There were 51 candidates up for nomination. Three candidates collected 35 signatures from the Syrian Parliament who has 250 deputies in total and has officially been approved by the Syrian Constitution court. The deputy elections are held in Syria every 4 years. Local and parliamentary elections are also held every four years but they leave 1 year in between elections. Presidential Elections takes place every 7 years separately from other election schedules.

In the crises period Syria held three parliamentary elections in 2012, 2016 and 2020.  Last local elections were held in 2018 in which the Syrian Government has control over.

55 years old Bashar Assad, who is governing Syria for 21 years, is expected to be elected again.

Syrian journalist Sarkis Kassarjian who currently lives in Damascus answered United World International’s questions regarding the elections in his country.

How many candidates do you have in the general election? What are their political messages?  Do they compete politically? Can you say the country is ready for the election?

We had 51 candidates for nomination. According to constitutional law, candidates for nomination should take at least 35 deputy votes in the parliament to enter the election. The result of this process has left us with 3 candidates; the current President Bashar Assad, Abdallah Sellum Abdallah and Mahmoud Ahmed Marei. If we evaluate the candidates; two of them have almost zero probability of getting elected, because Abdullah Sellum is a candidate of a very small party. His party, Arab Nasurian, doesn’t have popularity.  The candidate Mahmut Marei, who attended the UN meetings in Geneva representing the opposition in Syria, is also not a well-known character in Syria.

Besides, the democratic election system is new to the people. Therefore people in Syria won’t search or look in to new candidates’ program and what they offer to the country. They don’t have that kind of culture. That’s the reason why I don’t believe they have possibility of succeeding in this election.

What offers and promises Bashar Assad to the Syrian public? Why should they elect him again?

The biggest argument for the Syrian public to elect Bashar Assad is the following: they see him as a protector and guarantor for their security, their country’s territorial rights and of secularism. That is why they vote for Assad. Without Assad, Syria can slide into chaos like we have seen in Libya. Or it can turn into a new Lebanon, that is, a country where foreign controlled religious or ethnic groups pursue own agendas and politics in the domestic arena.

Secondly, we see that nationalist Arabs of the broader region strongly support Assad. Both in Syria and in the Arab world. For example in Egypt, Algeria and Tunisia, Assad supporters are all Arab Nationalists. Both Syrian nationalists and Arab nationalists in other countries see Assad as the only power that can stop a Kurdish structure in the area.

How do political parties and people see the elections?

Political progress will enable Syria to get out of the current political isolation will provide great leverage to the country both politically and economically. This is what the Syrian people expect from the elections. This is why the elections bring lots of hope.

What is in the agenda of people in Damascus City’s famous Mithad Pasha Bazaar or the historical Hamidiye Bazaar, that is close to Umayyad Mosque? Elections?

The most important thing for the people in the places you mentioned is “economy”.  The difficult conditions of the economy are their biggest problem. They expect elections to change the economical situation. They care about prices, currencies, inflation and unemployment issues the most.

How do the Syrian people see the oppositional forces in this election? Do they have any support?

What about the other regions of Syria? Will the elections be held in the whole country?

People are waiting for this election because they are expecting changes after. People have great hope in these elections. The streets are full of posters and banners of Assad supporters.

But the elections are going to be held only in the regions that are controlled by the Assad government. Idleb won’t have the ballot box. There won’t be any ballot boxes from in the northern region controlled by Turkey, from Azaz to Rasulayn. Damascus sees Turkey as an invading country. That’s why they won’t have ballot boxes there.

And then there are the areas under YPG control. Here, election centers will be established only in the small parts that the government controls. People will be able to vote in the center of Hasekah and Qamishli, which are under Syrian government’s control.

“Damascus considers YPG an occupation force, an unconstitutional organization and has started recently to label them as ‘terror organization'”

Outside these pockets, there will be no election in the YPG-controlled areas. This is simply unthinkable, because Damascus considers the YPG also as an occupying force. The Syrian government sees the YPG as an unconstitutional organization that imposed itself by arms on the people.

The West has announced that it will not recognize the election results. Is there any country that is going to recognize it?

The West won’t. The polarization regarding the Syria issue is obvious. There are double standards in the West. They don’t recognize the government, but they also know they can’t replace him with any other power, because there is no one who can take his role. They tried many other political solutions and all their alternatives have failed. As a result, the West abandoned the demand that “Assad should go”, and it will slowly and de facto recognize the election results.

There are also some countries sending observers to the elections. They will also recognize the results as long as there are no serious electoral violations.

There’s a difference between these elections and the precious ones: There is a tendency in the Arab world to recognize the results. We witnessed some positive initiatives from Arabic countries towards Syria. The political relations with the United Arab Emirates are progressing. Jordan, Saudi Arabia and Egypt are expected to open new chapters politically with Syria.

Do you see a new era on the horizon with Syria’s return to the Arab league and its meetings with Saudi Arabian intelligence?

I believe that Syria will soon return to the Arab league. After witnessing Syria communicating with Saudi Arabian intelligence and also with many other countries, I can tell is this will happen right after elections. Also Egypt’s and Saudi Arabia’s initiatives are pointing in this direction. The perspective might be to establish a joint position of Arab countries concerning Turkey. And I believe current plans are heading to this direction.

Why did the diplomatic initiatives accelerate this much in this period? Does Syrian Government see Saud committee’s visit as a success?

Saudi delegations’ or the Arab countries’ request for reopening relations will be evaluated by Damascus as a victory. This is for sure. Because it’s a 180 degrees turn. This change is more likely because of a change in world politics’ then connected to elections. Biden’s election in the US, repair of Saudi Arabia’s relations with and Qatar and many other factors affected this change. The most important thing is that the Gulf countries, Saudi Arabia, the United Arab Emirates and Egypt consider Turkey as a threat. In this context, these countries share the same vision with Syria. Syria considers Turkey as a threat too. And I think this is an important factor.

How is Syria’s perception of Turkey in the last ten years? After so many years, how do Syrian politicians assess Turkey?

As for all problems in Syria, there is not a single and united view on Turkey. We can talk about two different wings in Syria. One is the one that supports the current political structure. They tend to consider Turkey as their enemy. The opposition on the other side considers Turkey as their savior.

But these views can change if Turkey changes its politics. The same perception also existed for Saudi Arabia, but when Saudi Arabia changed its politics or showed signs of leaving their old political stance, the perception in the public changed as well. This negative perception is only appeared because of politics. Before Turkey was loved and respected country in Syria. That’s why any change in Turkish Government’s stance will change the outlook on Turkey here again.