Popular Front for the Liberation of Palestine official: “Israel has been defeated” 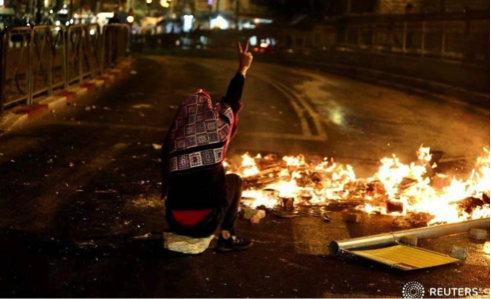 The heroic uprising of Bab al-Amoud (known as Damascus Gate) is not out of context, but rather a continuation of a series of events. These started with the glorious electronic gates’ uprising, the “Jerusalem Intifada 2015”, which the the occupation called the “Knife Intifada” (stabbing intifada), as well as other popular reactions that expressed the accumulated anger of the holy city population left, because this was kept in a state of siege, isolation and impoverishment. The population was targeted specifically over half of a century of occupation. This condition has deteriorated during the last two decades, through the construction of apartheid walls, reinforcement of military checkpoints around the city, and the expansion of settlements in and around Jerusalem, aiming at fragmenting the city and creating a demographic reality compatible with the occupation plans.

If this is deemed an indicator, it shows that the occupation authorities are attempting to consecrate the idea of ​​the superiority of the Jewish character over the Islamic-national Palestinian character of the Holy City. The Zionist occupation rejects by all means that Jerusalem is an Islamic or Arab city. Rather, it wants it to be a pure Jewish city in accordance with the Jewish nation-state bill passed by the Israeli Knesset two years ago.

“Youth is fighting for the last space of identity”

The events started with the occupation forces imposing severe restrictions on Palestinian movement in Jerusalem and prevented them from sitting freely in the “Bab al-Amoud” square. Later, the number of attacks and repression perpetrated by the occupation soldiers and settlers, against the Jerusalemites, escalated. However, what is new in the current uprising is that it has demonstrated the ability of a Jerusalemite youth, courageous and daring, without any factional affiliations, to challenge the occupation. What brought this youth together, is the last space of identity which the occupation seeks to erase to substitute it with a foreign identity rejected by the city’s history.

The implications of the “Bab al-Amoud” uprising will not come to an end soon, after it conveyed a political message to the occupation, showing that if it keeps on with its attacks and provocations, the Jerusalemites are ready for another intifada to thwart the occupation’s plans, just as it happened in the uprising of the electronic gates about four years ago.

The successive occupation governments and their security apparatuses have dealt with Jerusalemites on the basis of the assumption that if a Jerusalemite does not obey by force, he will definitely do with increased repression and force. As if it was not enough to deprive Jerusalem citizens of their fundamental national political, economic and social rights, as they also engaged in deliberate expulsion, displacement and ethnic cleansing of Jerusalemites, in addition to other blatant racist practices.

These practices against Jerusalemites have become “invasive” and “aggressive” interfering in all details of daily life, with the occupation forces giving the green light to their settler gangs as well as the Talmudic and biblical groups, to oppress, abuse, terrorize, intimidate and assault the Jerusalemites’ properties and homes and harm their religious feelings, whether Islamic or Christian. These series of events triggered a restrained anger and reactions, which soon exploded in the face of the occupation and its settlers.

The uprising is only the spark that reflects all this accumulated oppression and frustration, and even if it has been launched spontaneously, it is a conscious reaction by those young people who are challenging the occupation, are ready to die for the sake of a cause like Al-Aqsa or Bab al-Amoud. This uprising is an expression of the city identity and these are the last castles they defend to preserve their presence in the city.

Is it enough to stand with the Jerusalem uprising, and call for its endorsement and provide it with support? Is it enough to let its youth feel they are not alone in their battle and let them know we support them? How to do it? In addition to that, what else we should do?

The answer lies simply in the responsibility of the Palestinians, first and foremost, to make this uprising be the start of a comprehensive popular uprising that spreads through the cities, villages and camps of the West Bank; since the Jerusalem uprising expressed the whole Palestinian reality under occupation, with the expansion of settlements, and the exacerbation of expected violations, dangers and challenges which threaten Jerusalem in general, and the Al-Aqsa Mosque in particular. Jerusalem is coming close to a battle aiming at evicting families living in the Sheikh Jarrah neighborhood in Jerusalem from their homes, during the current month of May. As for the Al-Aqsa Mosque, it is facing daily violations and attacks by the Temple groups supported by the Zionist government and its military forces, and it is getting ready to face a major battle on the twenty-eighth of Ramadan to thwart the Zionist plans which seek to let the settlers invade it.

The enemy prioritizes the settlement expansion and aspires for a tighter control over Jerusalem, as well as the Al-Aqsa Mosque, Hebron and other areas. He is acting as such, whether we ignore it or not. This means, objectively, that we are engaged in a direct confrontation and we cannot be preoccupied by other concerns or postpone the confrontation. This, of course, is what the courageous group of young men and women of Jerusalem did during the uprising of the Bab al-Amoud, which the occupation intended to change its reality, by attempting to tightening its grips on the city.

“National unity and the establishment of an uprising front is necessary”

Basically, the required response to the Judaization, settlement expansion and occupation of Jerusalem and the West Bank is to achieve national unity (establishing an uprising front), as it occurred in the uprising of Jerusalem, where all the active forces were brought together and were united with the city’s youth, male and female, to be involved in the confrontation battles in Bab al-Amoud.

The Jerusalem uprising has confirmed a remarkable reality, which is that the revolutionary status of the Palestinian people is not confined to Jerusalem per se, but rather involves the West Bank, not to mention the Gaza Strip and the Palestinian diaspora, and historical Palestine as well. All the Palestinians are unanimous regarding uprising and confrontation. So no one should see what happened in the Bab al-Amoud as a phenomenon confined to one group of young people living in one city, but it is rather a general phenomenon, latent and certainly ready to be triggered.

This intifada is a reflection of what the souls of the Palestinians are living and feeling around the clock and during lifetime. The Palestinians’ major concern is that their cause is a confrontation between right and wrong. The occupation is wrong and doomed. People aspiring to freedom are mobilized to reject this occupation, not for one day or two, but always, and by all possible ways and means.

Victory is inevitable. Within this context, Nadav Hatzni, one of the hard-core right-wing extremist publicist and attorney in the Zionist entity, wrote in the Zionist Maariv newspaper, acknowledging the defeat in front of the Palestinian people’s resistance: “Israel bows its head in front of the resistance’s missiles, after it surrendered on the issue of the checkpoints at Bab al-Amoud and provided the resistance with a moral victory that is expected to yield more confrontations, because what can be seen as a final result in the media outlets, social media, Jerusalem and the world at large is entitled “Israel has been defeated.”

Khaled Yamani is the official of The Popular Front for the Liberation of Palestine (PFLP) and Senior Member of the Refugees and Right of Return Department.