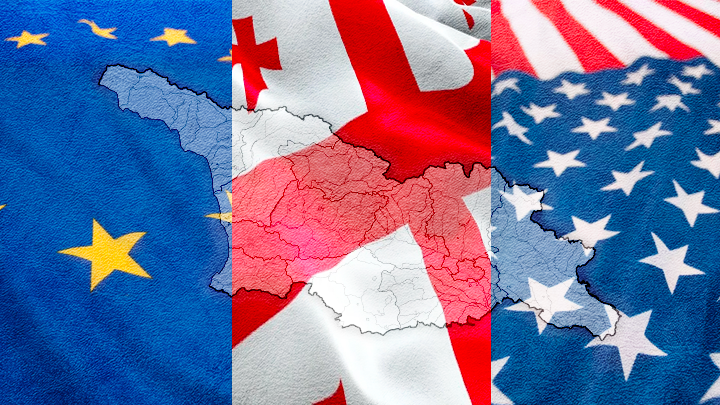 The recent political crisis and turmoil in Georgia, which broke out following the parliamentary elections of October 31, 2020, is attempting to be settled by the joint efforts of the US and the EU. Georgia is of key importance for the West in their struggle against Russia, for this reason, they want to prevent the continuity of such a crisis.

The recent crisis was sparked by the non-recognition of the parliamentary elections by the opposition parties and fueled by the arrest of the main opposition party of Georgia. The country has been ruled by the Georgian Dream Party, since 2012. The party, founded by the billionaire businessman Bidzina Ivanishvili in 2012, managed to mobilize a great part of the population (mainly those, who disliked the policies of the then President Michael Saakashvili) and got more than 54% of the votes in the parliamentary elections, which was held the same year. In the presidential elections, which were held the next year, the candidate of that party, Giorgi Margvelashvili won the elections. The party also won the next parliamentary elections that were held in 2016 and the presidential elections in 2018 by the party’s candidate Salome Zourabichvili. Thus, the party Georgian Dream has been dominating the executive branch of the state for almost 9 years. The party won in the latest parliamentary elections, however, all the other parties claim that the last elections were neither fair nor free. They accuse the ruling party of exerting pressure on their opponents.

The Significance of Georgia for the West

This small former Soviet country, which has an area of about 70 thousand square kilometers and a population of about 3,7 million people, attracts major attention from the US and the EU. Located in the Southern Caucasus, the country is a part of the trade and energy corridors between Central Asia and Europe. Oil and gas pipelines, which bypass Russia, pass through Georgia. Trade routes that bypass Russia also pass through the country. On the other hand, if Russia manages to establish its control there, it can also establish control on energy and trade routes. For this reason, none of the great powers wish to leave Georgia with its own fate.

In addition to its geopolitical significance, Georgia also used to be a model country: It was the first country in the post-Soviet sphere where a pro-Western “colored revolution” occurred: At the end of 2003, as a result of the “Rose Revolution”, backed by the US and the EU, Michael Saakashvili had come to presidency. During his rule, which lasted almost 10 years (Saakashvili had also won the presidential elections in 2008), Saakashvili, with the active support of Western countries, transformed the country in accordance with the expectations of the West. The chairman of the local foundation of George Soros in Georgia became the minister of education, after that “Rose Revolution” took place.

Moreover, the current president of Georgia, Salome Zourabischvili, who was born in France, was French citizen and served as the Ambassador of France to Georgia, was transferred from France to Georgia with an agreement reached between France and Georgia in 2004 and became the Minister of Foreign Affairs of Georgia (she would later quarrel with Saakashvili and terminate all of her relations with him). Consequently, Georgia was transformed into a country, which could be presented by the US and in general by the West, as a “model country” for the other former Soviet countries. Indeed, after the revolution of the pro-Western powers in Ukraine in 2014, The US urged the new government of Ukraine to perform pro-Western reforms in the state system and at that time, many Georgian bureaucrats and politicians, including the former president of Georgia Michael Saakashvili had been invited to Ukraine, they were given Ukrainian citizenship and were employed at the highest ranks of the Ukrainian state, for realization of such reforms. For this reason, while the US wishes to export “colored revolutions” to the other former Soviet countries, it would not like the “model country” to be discredited as a result of inner political conflicts.

Georgia is not only an arena of permanent conflict of interests between Russia and the West, but also a place of ethnic conflicts. Since the collapse of the Soviet Union in 1991, Abhazia and Southern Ossetia have been seeking independence from Georgia. Following the dissolution of the Soviet Union, bloody battles occurred in those territories and those regions, backed by the Russian Army, had managed to establish control and expel Georgian soldiers, as well as a large number of Georgian civilians. Afterwards, as a result of conflicts with Georgian forces, those breakaway administrations managed to enlarge their territories. Consequently, today, one fifth of the territories of this small country is out of the control of the Georgian government.

In 2008, then President Michael Saakashvili, having too much confidence in the Western support, tried to gain the control of the Southern Ossetia by means of direct military attack. However, Russia intervened immediately and after the “Five Days War”, Russia recognized the independence of those two breakaway regions. Nonetheless, recognition of those territories by Russia was not followed by the international community: Even Belarus did not recognize them, while only 6 countries in the world have recognized the independence of Abkhazia and South Ossetia so far.

Saakashvili’s adventurous war and his subsequent defeat was also the beginning of the end of his political career. In addition, the trade embargo, imposed by Russia on Georgian wine and mineral water in 2006 because  his policie had struck a blow to the Georgian economy. It is worth attention that just after the electoral victory of the opponents of Saakashvili in 2012 and in 2013, the new government managed to convince Russia to lift this embargo.

Meanwhile, the “Five Days War” and the subsequent recognition of independence of Abkhazia and Southern Ossetia by Russia caused a rise of anti-Russian sentiments in Georgia. According to a survey, conducted recently, 88% of Georgians perceive Russia as a threat for Georgia and only 2% of the respondents identify himself/herself as pro-Russian. 83% of the people living in Georgia proper support membership to the EU, while 78% of them support membership in NATO. On the other hand, not all of those who consider Russia as a threat defend termination of all of the relations with Russia: 71% of the respondents defend protection of relations with Russia, while only 22% of them support complete termination. This attitude of the majority of the citizens of Georgia (to perceive Russia as a threat, but not to wish to break all ties), also reflects the attitude of the ruling Georgian Dream party and here we see the difference of this party with Saakashvili’s “United National Movement”, which adopts a more combatant rhetoric.

Saakashvili, during his second term in presidency (2008-2013), was accused of exerting pressure on his opponents. However, after the Georgian Dream Party came to power in 2012, they began to wage a revenge policy towards the old rulers. Saakashvili had left the country just after his term ended. The new government began investigations against Saakashvili. When he came to Ukraine and acquired Ukrainian citizenship, the Georgian government deprived him of Georgian citizenship. Moreover, Saakashvili came into conflict with the then Ukrainian administration and he was even deprived of Ukrainian citizenship. In Ukraine, he established a political party and began to wage a campaign against the then President Petro Poroshenko, but he was deported from Ukraine. He could return back only after Volodymyr Zelensky came to power. Before the recent elections in Georgia, he declared that he expects a victory of his United National Movement and that he is ready to go to Georgia (despite the fact that many criminal cases in Georgia have been opened against him).

The Last Elections and Eruption of the Political Crisis

Nevertheless, the winner of the elections was again the Georgian Dream Party with 43% of the votes. The coalition of the opponents “Power in Unity”, which included the United National Movement, got 26,8% of the votes. Most western countries recognized the elections free and fair, although the observers from the Transparency International said that the last elections were in worse conditions than the 2016 elections. Consequently, the opposition parties refused to recognize the election results and refused to participate in the new parliament (currently, there is only one party in the parliament, since only the ruling party has recognized the official results). This situation created the problem of legitimacy for the entire political system of the country.

The political crisis was further fueled by the arrest of the opposition leader (Chairman of the National Unity Movement) Nika Melia in February. Last year, he was charged with provoking the incidents in the summer of 2019, when a large number of nationalists attacked the parliament building and clashed with the police and ultimately he was found guilty. He had to pay a fine, equal to $9,000 USD, but he refused to pay and he took off the electronic bracelet put on him by the court. For those reasons, a court in Tbilisi in February of this year ordered his arrest. This situation further raised the tensions and the then prime minister Georgi Gagakhria resigned, fearing that such a decision of the court will further increase polarization in the country. Indeed, the opposition leader Melia refused to surrender and he was protected in the party office by many volunteers from various political parties. For this reason, the police used force in order to enter the building and to detain Melia. This situation caused anxiety among the western politicians and both the EU and the US expressed their deep concerns.

The supporters of the ruling Georgian Dream Party mainly live in rural areas, while most of the supporters of the National Unity Movement live in the capital. Although the demonstrations of the opposition parties were attended by thousands of the people, the Georgians are tired of and disappointed by revolutions.

After many failed attempts of the US and the EU to reconcile the parties, ultimately, on April 19, an agreement was reached between the government and the opposition. According to the agreement, the opposition parties will participate in the parliament, there will be reforms in the election law and if in the local elections that will occur in October the ruling party gets less than 43% throughout the country, then, there will be early parliamentary elections in 2022.

However, the main opposition party, the National Movement Unity has not returned yet to the parliament, since its chairman is still in prison. Furthermore, political observers say that, it is not certain that those agreements between the parties will be realized. In this case, in autumn, political tensions may again rise.

In this situation, one thing is certain: With this political polarization and instability, Georgia is no longer a “model country” for the former Soviet republics.