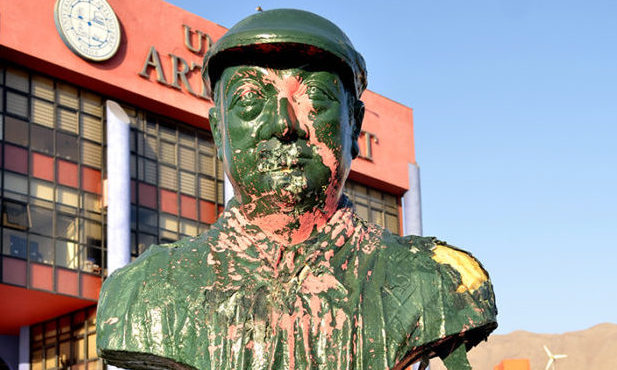 Chile’s geography is very interesting. The country is thousands of miles long, but it is stuck in a narrow piece of land. On one side are the magnificent Andes, and on the other side is the Pacific Ocean. Between them is a thin country that stretches from the border with Peru in the north to the South Pole. Because of this, you come across all kinds of climates over these thousands of kilometers.

Travelling the country, we finally arrived after many transfers from the southernmost Patagonia to the northernmost city of Iquique. In Iquique, a brown desert has replaced the magnificent forests, lakes and rivers of the south. It is one of the most important centers of Chilean mining industry. We were staying at the modest home of a fellow worker who worked in a copper mine two hours away.

A statue and the new face of changing Chile

When we went for a walk in the evening, we noticed a statue just in front of the nearby University. The statue was attacked with red paint, its mouth and nose were broken, and it was painted all over. We got curious, walked towards the statue and took a close look. It was the statue of our Pablo Neruda! An old friend of Nazım Hikmet; Neruda, who wrote a tearful poem when Nazım died, “where did you go, brother, from whom will we get the light now”? Pablo Neruda, one of the most widely read poets of the Chilean people’s anti-fascist resistance in the 1970s and even the Turkish Left in those years! We were stunned and immediately took a picture.

A few days later, we were in the Chilean city of Vina Del Mar, which can be considered like the Turkish Bodrum. It was a city that was the center of antigovernment demonstrations two years ago. Almost everywhere in the city, graffiti and demolished buildings were telling the story of these demonstrations. Everywhere we walked in the capital cities of Santiago, Vina Del Mar, Iquique and Valparaiso, almost every wall, every window and every door that could be written on was filled with graffiti and posters. We were also used to such protest graffiti from Turkey, but we had never seen this amount, not even in the 1970s. In a way, the remnants of the protests did not leave those who protested in their own cities, even after two years!

Is Neruda a “womanizer”?

At a meeting at a yoga center in the evening, we were with a group of young men and women who were very active in those protests. There, I tried to explain how much the Turks loved Pablo Neruda, and that we strengthened our political resistance with his books in the 1970s and 80s. However, during our conversation, we also saw that the status of Pablo Neruda has changed in the opposite way since those days! The current new generation of leftists said that Pablo Neruda was a “machismo”, that is, a “male-dominating” person, and therefore discredited! And Neruda now belonged to the ruling classes, according to them.

It was stunning; I, a Turkish admirer from ten thousand kilometers away, had to defend Neruda against his compatriots, Chilean leftists. We asked how they decided that Neruda was a symbol of male domination, they indicated that he married 3 times, raped a maid in a hotel room to write a poem about it, and used her as inspiration for his poem! We were both defending Neruda and wondering if Nazim Hikmet was also accused of such “womanizing” in Turkey in the corner of our minds. It seemed that Western culture, in the theories of globalization, also watered down the “dangerous” personalities that people would take as an example for themselves, and turned them into “nothing”. We were wondering what our Chilean friends who called Neruda “macho”, would say to Nazım Hikmet’s lifestyle.

We brought Pablo a salute from Nazım

But just two days ago, we went on a long journey from Vina Del Mar to Isla Negra, where Pablo Neruda’s house is, and paid a spiritual visit to Pablo in this inspiring House. And in the memorial book at the entrance to the house, we stated that we had brought greetings from Turkey and scribbled the following:

“Dear Pablo, I have brought you the greetings of your friend Nazım Hikmet from Turkey. In our difficult days, your poems, along with Nazım’s, have given us hope. Thank you for those beautiful poems. From here, we will take the ocean winds and your smiling face to our homeland and to your friend Nazım. Goodbye, buenas tardes!”

Pablo Neruda was a great Chilean poet who defended his homeland and the people of his hometown against Pinochet’s American fascist junta, inspiring anti – fascist insurgents all over the world. But, in his home country, in the hands of cultural alienation and a kind of male-hostile feminism pumped up by globalism, he significance was reduced to the level of an ordinary “womanizer”. We felt bad when we also observed that such a thought was indeed quite common, especially among the younger generation of leftists.  If you discredit Chile’s greatest revolutionary poet, then with whom you can stand against the oppressions?

Reflections of the “globalist” lifestyle

Of course, we weren’t just having this discussion on behalf of Pablo Neruda. After all, they were Chilean, like Pablo, and they had the freedom to think as they pleased in their internal affairs. But in our minds, there was more of a question of how the “globalist” culture could be so effective all around the world from our homeland Turkey to Chile. Especially Nazım Hikmet came to our minds.

We knew all his love stories, his relationships at home and abroad, his immortal love poems written for Piraye, Vera and other women. I wonder if the likes of our “globalizing” left-wing friends in Chile will come out in our homeland Turkey too?

There was, of course, a male-dominated historical structure in traditional Latin American culture. And globalists have made a very good excuse for this and pumped up the so-called liberating LGBT lifestyle for years. And they are very successful in that as we have seen it personally in Bolivia, Chile, Argentina and Uruguay in the 2 months we spent last year. Both in the circles we met in person, and in the banners reflected on the graffities, a fairly strong pseudo-feminism and LGBT slogans dominated.

In these days, when the Istanbul Convention has been cancelled and much discussed, we thought it might be useful to bring a similar topic from the other side of the world, Latin America, before the reader. In this way, it will be easier to see the dimensions of the” globalist ” cultural attack. In other words, the Istanbul Convention is a theory of pumping already bankrupted-Western lifestyle and individualism upon the people of the world.

We have seen the result of these efforts very clearly in the last year, not only in Turkey, but also on the peoples of all countries across the world. It is obviously produced from the same sources and the whole world is being forced to accept this life style. Otherwise, such a uniform lifestyle preference could not have emerged in the same way, in very different societies separated by two huge oceans and thousands of kilometers from each other.