“Russia and China should approach the Cyprus Question strategically” 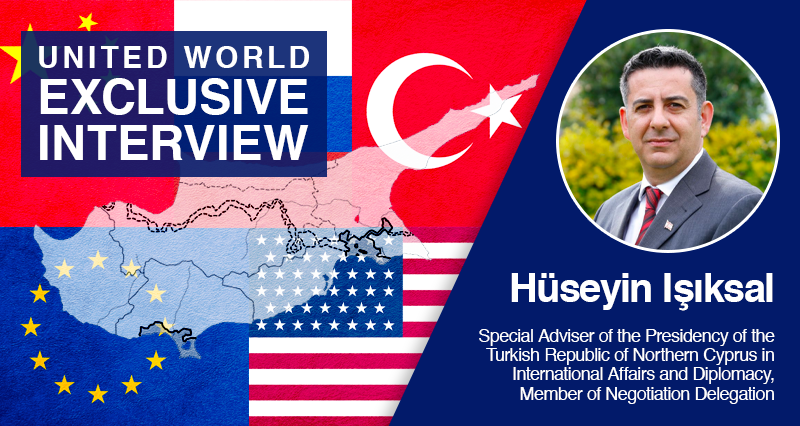 The UN convened 5+ talks on the Cyprus Question have started in Geneva on April 27 with the participation of the Turkish Republic of Northern Cyprus (TRNC), Greek Administration of Southern Cyprus, and the guarantor states Turkey, Greece and United Kingdom. The meetings are scheduled to end today on April 29th.

United World International had organized a press meeting with TRNC President Ersin Tatar before the Geneva conference. While the talks were ongoing, UWI spoke with Hüseyin Işıksal, Special Adviser of the Presidency of the Turkish Republic of Northern Cyprus in International Affairs and Diplomacy and a member of the TRNC-Delegation in Geneva.

Işıksal commented on the position of the Turkish Republic of Northern Cyprus, the state of affairs in the meeting and made an important call to the Eurasian powers Russia and China.

How would you summarize the history of negotiations in the Cyprus Question?

The negotiations in Cyprus have started in 1968 in Beirut, Lebanon. Then Presidents of the two parts, Makarios and Denktaş have signed “Summit Agreements” in 1977 and 1979 and continued negotiations along the concept of two societies, two segments and one federation. But no result has been achieved till today. There were some turning points, for instance, the Turkish side has accepted the Annan Plan in 2004 in a referendum, but the Greek side has rejected that plan with an overwhelming majority. Later on, we have witnessed how the Crans Montana process has failed. Then TRNC President, Mustafa Akıncı also had said during Crans Montana “this is our generations last chance”. Akıncı was a leader who believed strongly in the idea of the federation.

Now the Turkish side has a new President, Ersin Tatar, with a new vision. For us, the most just, lasting, sustainable, practical solution is the model with two sovereign states that have equal international status. This is the position we have presented in the Geneva meeting.

Which position did you present in the Geneva meeting?

First of all, we must state that there is no demand for a federation in the Turkish or Greek societies in Cyprus.

Our first target is that the UN recognizes the existence of two separate and sovereign states on the island. Before official and formal negotiations can start, the UN has to recognize that these can only take place between two sovereign and internationally recognized states. The UN has to recognize that the sides of possible negotiations are internationally equally sovereign. This is the premise for the best solution. If that condition is not given, then we cannot speak of a solution.

Greek side’s gains from the two-state-solution

How is your impression of the meeting?

The Turkish-Cypriot side has a positive impression until now, because the first time in history, we take the position to defend the sovereign equality and of the two states and their equal international status. We have presented this position to the conference. The different sides may not have expected from us to take this position, they might have thought that we are not serious in our demands. But we are!

Why should the Greek side accept your proposal?

First of all, we need to emphasize developments in the Eastern Mediterranean, where shortsighted approaches pose risks that also can lead to tensions in the relations between Turkey and Greece.

If, on the other hand, the principle of equal sovereignty is accepted, the Greek-Cypriot side will have several gains too. Here are some examples:

1. If the hydrocarbon and gas resources are transported to Europe via Turkey, then the Greek side will have a great gain from this.

2. The Greeks don’t want to share power with the Turkish Cypriots. If the existence of two equally sovereign states is accepted, then they will have strengthened their sovereignty in their part concerning maritime, airspace and coastal regions.

3. The Greek–Cypriots will be able to use Turkish and TRNC airspace, airports and air corridors easily, once the normalization in relations to Turkey is achieved.

4. Turkey has a big domestic market. The Greek-Cypriots side will have the chance to access this market too.

5. With the normalization of relations, they will receive maybe millions of tourists coming from Turkey and the according income.

6. They will be able to participate in water and electricity investment projects with Turkey.

So, if common sense prevails and the Turkish model, which is based on the realities of the island, is accepted, both sides will have achieved the ideal solution.

Do you have any comments to other international actors?

Firstly I would like to speak to the European Union. The Turkish-Cypriot population does not need the European Union’s incentives or gifts. Our homeland Turkey already answers all our needs. The EU should approach us in a more just way.

We are deeming great importance to relations with Russia. The Greek Cypriot side is member of the EU and part of the Western alliance. I don’t think that the Russian side will be very pleased with all the military agreements, joint military exercises, military programs and arms contracts that the Greek Cypriot will make with the US side especially after the establishment of the Biden Administration. I think that the Russian side needs to approach the Cyprus Question in a much more balanced way. At the end, Russia is member of the UN Security Council.

Turkey has very good relations with Russia and I think Russia should consider all these developments very well. I think that Russia should focus on its own interests and that these interests will lead Moscow to support the Turkish-Cypriot side. This will be in their own interests.

It is the same for China. Chine should evaluate the Cyprus Question strategically. China wants to revive with the Belt and Road Project old trade routes. Here, the Chinese government should recognize what an important energy corridor Turkey is. At this point, there are the US and the EU that are trying to stop China’s growing power. In this context, the stability and balance on the island is very important. Russia and China should consider all these aspects very well.