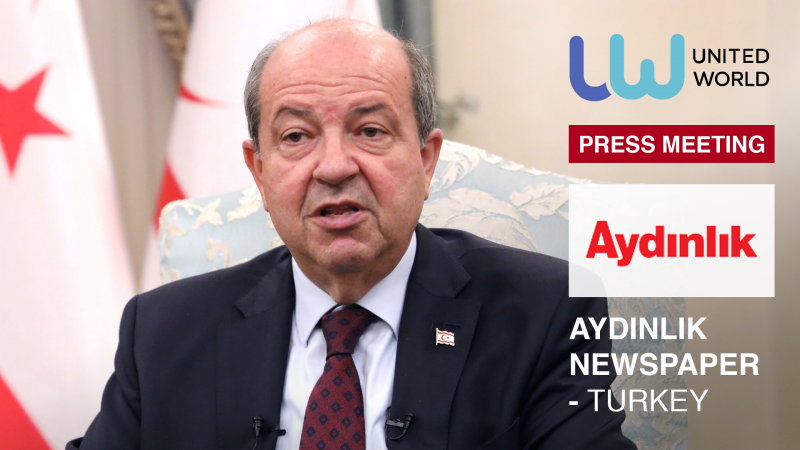 United World International has organized a press meeting with Ersin Tatar, President of the Turkish Republic of Northern Cyprus.

The meeting has attracted considerable press attention. The Turkish daily newspaper Aydınlık, that has taken part in the meeting titled “Tatar determined for Two-State-Solution” and reported the following.

UWI presents below the news article of Aydınlık, published on 23rd of April, 2021.

The President of the Turkish Republic of Northern Cyprus, Ersin Tatar has participated in an online press meeting. In the meeting, where journalists from different countries were present, Tatar’s statements displayed a strong anti-imperialist character. The President has declared he will defend the Two-State-Solution and the Turkish Republic of Northern Cyprus against plans of a federation.

The meeting has taken place right before the start of the informal 5+UN meeting in Geneva. United World International organized the event, where journalists from different parts of the world have taken part. The event with participation of media from Iran, Russia, Greece, Egypt, Azerbaijan, Italy, Spain, Mali, Venezuela, China and Turkey has consisted of three parts. President Tatar opened the meeting with a speech, followed by questions & answers.

In his opening speech, Tatar made a strong statement for the rights of the Turkish Republic of Northern Cyprus, and described his country’s joint struggle with Turkey. The President emphasized that the Greek Administration of Southern Cyprus (GASC) pursued till today always the plan of Megali Idea, the annexation of Cyprus to Greece. Tatar emphasized that the GACS’ goal was to turn Cyprus into a federation, connect it to Greece and the European Union and then expel the Turks from the island. Tatar declared that a federation on Cyprus would never constitute a solution, underlining that the GASC and Greece considered themselves the true and only owners of the island.

In the Q&A section of the meeting, Greek journalist Dimitris Konstantakopoulos, former advisor to Alexis Chipras, asked President Tatar what the GASC would gain from a two-state-solution. Tatar answered that the Turkish Republic of Northern Cyprus is seeking what’s in its rights, and in case the TRNC receives sovereignty, the two parts can develop economically and exploit natural and energy resources in cooperation. Tatar added that this two-state-solution would provide peace, security and stability to the region, including contributions from Turkey.

Tatar emphasized that the Cyprus Question can only be solved in a two-state-model and continued: “There are already two states in Cyprus, and this since 60 years. We have an own state with all its institutions since 60 years. What we now demand is the recognition of this state.”

The President of the Turkish Republic of Northern Cyprus emphasized that the Turks living in the northern part of the island have a different ethnic identity and language that the Greeks in the south, making the TRNC a Turkish homeland. Tatar outlined that the goal of GASC, Greece and Western countries was to expel the Turks from the island and force Turkey to give up on the struggle on Cyprus, and he emphasized that neither the Turkish Republic of Northern Cyprus nor Turkey would ever give up this fight. He added that Anastasiadis and the Greek Prime Minister Mitsotakis had already agreed upon the goal to eliminate Turkey’s guarantor status in a meeting, meanwhile continuing that position for Greece. Tatar explained that the two-state-solution would lead to a win-win situation, pointing to the fact that the GASC currently could not use Turkish airspace. Tatar stated that both sides will achieve peace and economic welfare when a solution is found.

Turkey re-establishing relations with Egypt will have great effect

While answering questions, Tatar repeatedly made anti-imperialist statements in the context of the TRNC’s struggle for independence, also frequently emphasizing that the TRNC would never give up to fight together with the homeland, Turkey. Answering a question from Toghrul Abbasov, Secretary General of the Cyprus-Azerbaijani Diaspora Center, Tatar stated that in spite of some minor problems, he was confident that Azerbaijan would recognize the TRNC in future. Tatar said friendship existed between the TRNC and Azerbaijan, two countries that shared culture and language.

Answering the question of the Egyptian journalist Mohammad Tharwat, President Tatar expressed his content on the fact that Turkey’s relations with Egypt were developing. Tatar said that established relations between Turkey and Egypt would contribute greatly to solve the problems in the Eastern Mediterranean. Tatar answered the question of journalist and political scientist, former foreign policy advisor to President Hugo Chavez, Micaela Ovelar from Venezuela on imperialisms goal in Cyprus. Tatar said imperialism targeted to expel Turks completely from the island and annex Cyprus to Greece and Europe. Expressing that imperialists were always unjust, President Tatar said they believed to do what they want due to their strength, but that the Turkish Republic of Northern Cyprus and Turkey would resist them till the end.

Representing the Turkish newspaper Aydınlık, we asked President Tatar for his opinion on Turkish plans to establish a military base in the TRNC. Tatar answered, “Turkey can pursue all activities here necessary for our and their security, we will definitely not object that, we can plan such a base together with Ankara.”