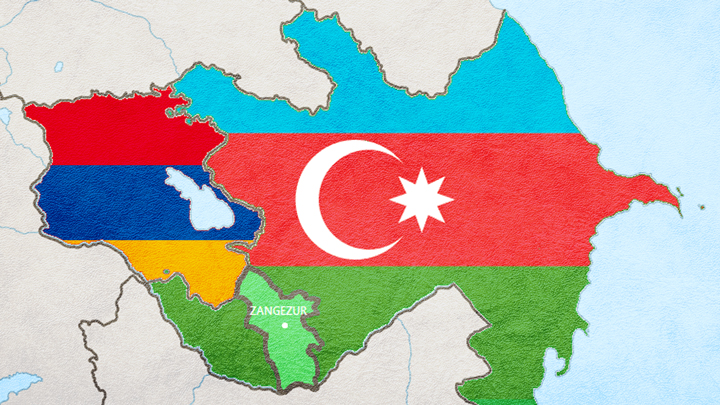 The topic of the Zangezur corridor has resulted in heated discussions in Armenian and Azerbaijani society. It has increased tension in the already tense relations between the two countries. Last week, Azerbaijani President Ilham Aliyev spoke again on the subject.

Touching upon the terms of the peace agreement signed between the leaders of Azerbaijan, Armenia and Russia on November 10, 2020, Ilham Aliyev spoke about Zangezur.

“I would like to note once again that the issue of the Zangezur corridor is one of the most discussed issues in Azerbaijan and Armenia today. Armenia is very concerned about this issue. Because, after the opening of the Zangezur corridor, Azerbaijan, which will have land relations with Turkey, will increase its economic and political power, which worries the Armenians. The Armenian press and social networks talk and write about Zangezur almost every day.

What are Armenians afraid of? The Armenian public fears that after the opening of the Zangezur corridor connecting Turkey and Azerbaijan, official Baku will make territorial claims against these lands and start a new war for Zangezur in the next stage. As a result, Armenia will lose Zangezur.”

Even taking into account this concern in the Armenian society, Armenian leadership – President Armen Sargsyan and Prime Minister Nikol Pashinyan – from time to time, visits the Zangezur region and meets with the local population to try to calm them down.

Even Prime Minister Nikol Pashinyan`s motorcade, which was visiting Zangezur a few days ago, was stopped by locals and angry residents who threw eggs.

Why Armenians living in Zangezur are afraid and anxious

Why are local Armenians living in Zangezur so worried and nervous? There are a number of reasons.

The Zangezur region, which the Armenians call Syunik, is located on the border with Azerbaijan, and now the Azerbaijani military is very close to that region and protects the state borders of the Republic of Azerbaijan.

There was one sentence that caught my attention during this speech. “Our main rival is time,” Ilham Aliyev said. This is not a simple statement; it is also a demonstration of Azerbaijan’s power. Today, Azerbaijan is not afraid of not only the defeated Armenia, but also its supporters and other world superpowers. It is only time that hinders the implementation of Azerbaijan’s plans in the short term.

This statement was presented differently in the Armenian press. Allegedly, Azerbaijan is making a territorial claim against Armenia and trying to capture the Zangezur region. In fact, we are talking about the opening of the Zangezur corridor, which is clearly reflected in the November 10 agreement. In other words, Armenian Prime Minister Nikol Pashinyan signed the agreement with his signature, and thus the Armenian side cannot hinder this project.

First of all, I would like to note that the November 10 statement signed by the Presidents of Azerbaijan, Russia and Prime Minister of Armenia reflected the issue of ensuring the land connection of Nakhchivan with the main part of Azerbaijan. This connection is provided by the Zangezur corridor. At present, the issue of opening the Zangezur corridor is on the agenda. The commissioning of this corridor will have a serious impact on the Azerbaijani economy and the region as a whole.

The opening of the Zangezur corridor will have a great impact on the economies of Turkic-speaking countries and increase the importance of the East-West and North-South transport corridors.

The Zangezur corridor will not only unite the Turkic-speaking countries with a nominal GDP of more than $1.1 trillion, but also increase the strategic importance of Azerbaijan. This corridor will connect a region with significant economic potential and natural resources.

Most importantly, the Turkic world will be reunited through the Zangezur corridor after many years.

It seems that the issue of the Zangezur corridor will cause tension between Armenia and Azerbaijan for many years to come. Refusal to open this corridor is a violation of the November 10, 2020 agreement. If Armenia goes for it, then a new war between the two countries will be inevitable. For Armenia, which was defeated in the 44-day war and its army was completely paralyzed, the new war means new and more serious tragedies.