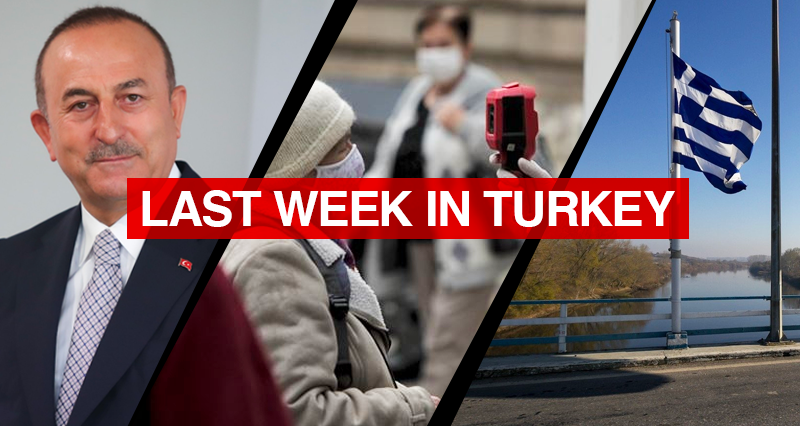 Last week, the public agenda in Turkey was busy with four main topics.

First, was the mutual positive messages and signs of cooperation and a potential meeting date given between Turkish and Egyptian top diplomats.

Secondly, the Greek government appointed Muslim muftis, causing a crisis, because the appointment is against the Lausanne Treaty.

Thirdly, the Turkish Foreign Minister Mevlut Cavusoglu visited the TRNC and made important statements there.

Fourthly, was the ongoing lockdowns and the vaccination efforts against the coronavirus pandemic.

Turkey and Egypt have recently released statements on bilateral ties, suggesting an expected restoration of relations after more than seven years of political estrangement.

The two countries exchanged positive signals on establishing contacts and dialogue, including the possibility of holding talks to demarcate their maritime borders in the Eastern Mediterranean.

A delegation of senior Turkish diplomats will pay Egypt an official visit early in May, Turkey’s Foreign Minister announced on Thursday.

Speaking on a televised interview, Mevlut Cavusoglu said Egypt had invited the Turkish side for the visit, which is to be held at the deputy foreign ministry-level.

After this meeting between delegations, Cavusoglu said he could meet his Egyptian counterpart as well.

On Saturday, Turkey’s top diplomat Mevlut Cavusoglu spoke over the phone with his Egyptian counterpart and exchanged greetings on the approaching Muslim holy month of Ramadan.

In an interview with Egyptian TV on Sunday, Shukri said Cairo is “keen to establish relations and create a dialogue with Turkey that serves the interests of both countries.”

“The recent Turkish statements and moves are appreciated […] Egypt is keen to establish a dialogue for the interest of both countries and have relations based on the rules of international law, in particular not to harm interests,” Shukri said.

Athens has “no right” to appoint the chief Islamic cleric, or mufti, of Muslims living in Greece according to the Treaty of Lausanne, Turkey’s President said on Friday.

“How can you do that? We do not appoint the patriarch,” Recep Tayyip Erdogan told reporters in the Istanbul, adding that the Ecumenical patriarch in Turkey is elected by the Holy Synod, the decision-making body of the Greek Orthodox Patriarchate.

Erdogan said Greece does not pay the “necessary care” for the citizenship of the 150,000 Turks living in Western Thrace, most of whom are Muslim.

He stressed that only officials of this group, such as muftis and imams, could choose a chief mufti in Greece.

In a joint news conference with Dendias on Thursday, Cavusoglu said faits accomplis and provocative rhetoric should be avoided in relations between the two countries.

“We wanted this first meeting to continue in a more positive atmosphere, but in his remarks, Nikos Dendias, unfortunately, made extremely unacceptable accusations against my country,” Cavusoglu said.

He said the claim that Turkey violated Greece’s sovereignty rights was unacceptable, adding: “Turkey is capable of protecting its rights, especially in the Eastern Mediterranean, and the rights of Turkish Cypriots.”

Turkey, which has the longest continental coastline in the Eastern Mediterranean, has rejected maritime boundary claims by Greece and the Greek Cypriot Administration of Southern Cyprus, stressing that their excessive claims violate the sovereign rights of Turkey and the Turkish Cypriots.

The election of muftis is regulated by the 1913 Treaty of Athens, a Greek-Ottoman pact that was implemented by Athens in 1920.

But in 1991, in violation of international law, Greece annulled its law regarding the treaty and unlawfully started to appoint muftis.

During the visit, Nikos Dendias has met his Turkish counterpart, Mevlut Cavusoglu, the ministry said on Tuesday.

All aspects of bilateral ties are on the meeting’s agenda, along with current regional issues, the statement added.

Through more than five decades of talks to resolve the Cyprus issue, the Greek side rejected all solution proposals, the Turkish foreign minister said on Friday.

“In these 53 years, Turkey and the Turkish Republic of Northern Cyprus have been in extremely constructive approach and showed good intention, but the Greek Cypriot side that does not want to share anything with the Turkish Cypriots and its supporter Greece rejected all solution offers either by a referendum or on the table,” Mevlut Cavusoglu said during his meeting with TRNC counterpart Tahsin Ertugruloglu in Lefkosa.

“We don’t have any more tolerance for this. Therefore, we propose a two-state solution based on sovereign equality,” he said.

Cavusoglu said his visit comes ahead of an informal 5+1 meeting in Cyprus that will be held in Geneva this month. The common stance of Ankara and Lefkosa will be decided during his visit, he stated.

He said the last meeting before going to Geneva will be held in Ankara and then they plan to go to Switzerland together.

“If there is a common ground, negotiations may begin with new parameters,” Cavusoglu said, adding that the existing parameters such as UN Security Council resolutions did not and will not benefit the process.

Lockdowns and Vaccination Efforts Against the Coronavirus Pandemic

Turkey has reported a new all-time record of coronavirus cases with 63,086 new cases this Friday, being only behind highly populated countries like the US, India, or Brazil

Turkey’s overall case tally is now over 4.26 million, while the nationwide death toll has reached 35,926.

More than 43.76 million coronavirus tests have been conducted in Turkey to date, and there are now 3,275 patients in critical condition nationwide.

Since its mass immunization drive began on January 14, Turkey has administered over 19.97 million coronavirus vaccine shots.

Over 12.19 million people have received their first doses of the vaccine, while more than 7.78 million have completed a two-dose course, according to official figures.

Starting last Wednesday, strict measures are in effect for the first two weeks of the Muslim holy month of Ramadan.

The weekday curfew now lasts from 19:00 (moved forward from 21:00) to 05:00, during which inter-city travel will also be banned, except in emergency cases. Weekend curfews will also continue in high-risk cities.

Cafes and restaurants will only provide delivery and takeout services, while wedding halls, sports centers, and game halls will remain closed until the end of Ramadan.