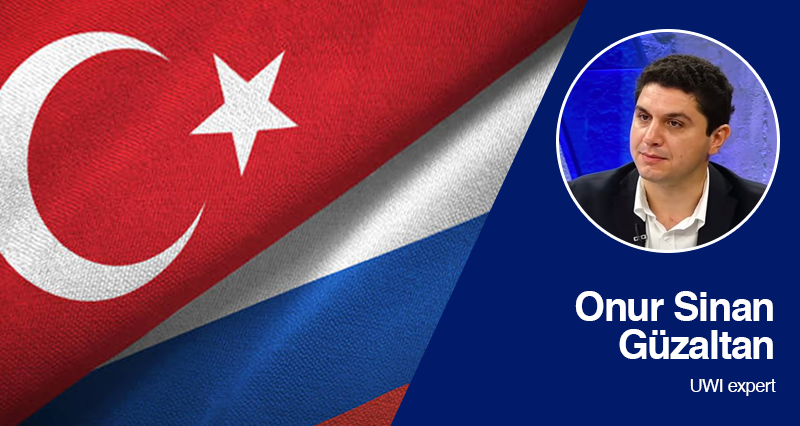 Along with the economic crisis happening in Turkey, the Turkish-Russian relations are also one of the dominant topics on the international arena.

I spoke on the Turkish-Russian relations to the Russian media outlet Rossaprimavera. The interview is presented below.

How sizeable are the reserves of the Turkish economy, what steps can the new head of the Central Bank take?

Turkey is going through a difficult situation in terms of economy. The continuing currency rate fluctuations and rising interest rates have destabilized the economy and have made it difficult to manage the situation.

To better understand the current economic situation, these three main dynamics need to be considered. These are far more critical factors then focusing on the foreign currency reserves and / or governors of the Central Bank;

1. The political operations from the Atlantic front

Turkey has recently accelerated its steps to move away from the Atlantic System and to strengthen its position in Eurasia. In Turkey’s policies of balance of powers, the weight has begun shifting towards Eurasia. And the Atlantic powers retaliated against these actions with a coup attempt plotted by the CIA on July 15th 2016, the support for terrorist organizations which directly threaten Turkey, such as the PKK/PYD/YPG, and as we have recently witnessed, economic operations.

Therefore, manipulative actions from the Atlantic Front are one of the many components of the current economic chaos in Turkey.

Since it has joined NATO in 1952, Turkey has become a country that defined and shaped itself according to the Western system, not only in political and military terms, but also in its economy. This was further reinforced by the neo-liberal model implemented after the 1980 military coup.

These policies, which were well-integrated to the West and were centered on a free market and privatization, continued to be implemented intensively, in the first period of the AKP government. We still cannot say that the government has abandoned from all these policies that have been pursued during that aforementioned period.

Although Turkey is politically orienting itself towards Asia today, its economic dependence on the Western-centered system is still persistent.

And with every step Turkey takes to break these chains, it faces many economic challenges since it is not ready for a radical structural reshaping.

The transition to a production-oriented economic model, steps to nationalize the market in economic terms and the establishment of trade cooperations with the neighbor countries are Turkey’s options as the solution to get out of the crisis.

It is clear that, there is a global recession and the free-market bubble has clearly burst since 2008. Today, the West and the economies based on the West are in a great abyss. The public uprisings that sparked due to economic reasons in the United States and in European countries are the greatest reflection of this situation.

The already existing and ever-growing global crisis has become even tougher with the ongoing coronavirus pandemic. Today we are facing a neoliberal order that has become almost paralyzed. The Western-centered globalization wave and its economic system are collapsing totally.

And the Turkish economy, which also has strong binds to this centralized system, has been affected just like its counterparts in the rest of the world.

And lastly, I would like to also remind that Turkey is a country with a significant experience in crisis management and has the potential to create alternatives, when evaluating all the pervious facts.

Are Erdogan’s actions a well-thought-out policy, or is this the case of the situation getting out of control and the president is reacting to it by trying to put out the fire with these attempts?

First, I would like to remind you that Turkey is a country with a well-established governmental tradition and with the ability to plan for the medium/long term.

Turkey is facing political, military, and economic challenges as we witness its shift towards Asia.

It can also resort to tactical changes according to the current conjuncture, in order to implement its long-term strategic objectives. And the economy is one of those areas where such tactical changes are frequently seen. It is more suitable to evaluate the recent steps taken by the government accordingly.

But I have to highlight the following; Turkey needs to make changes in its economic structure. The country cannot fight the system, whilst staying in the west-centered neoliberal system itself. Political and military actions must definitely be supported by economic actions.

The joint actions we would take with our neighbors, especially with Russia, and the creation of new areas of cooperation in this direction, will not only increase the resistance of Turkey, but also of the entire Eurasia against the Atlantic.

And when we look from a broader angle, with China being more active in our region and taking a clearer stance in this ever-polarizing geopolitical clash, Asia will have the upper hand against West-centered attacks.

How much can these changes affect the political situation? There has even been a statement about a possible reshuffle in the Turkish government.  It is admittedly a long time before the elections, but can the economic crisis lead, for example, to the resignation of the government? Or is it not a crisis and not even close to it?

Whether you like their policies or not, we have to accept that the same party has been in power in Turkey for almost 19 years.

The government is an effort to reshape itself in this new direction of Turkey, but it is not easy to make this change when considering their realities based on social class, the network of relations it has so far established, and the commitments it has made so far.

And when you look at the opposition, it is made up of disorganized parties that refrain to define themselves on the international arena. And the sincerity of the alliances they establish is rather controversial.

In short, I can clearly say that Turkey has an opposition problem, as much as it has a government problem. In the long run, Turkey will get back on tracks, with the deeper global trend changes and the shake-offs of the multipolar system.

We are right now entering a process, not only in Turkey but also throughout the entire region, where those who manage to create some national and regional alternatives against the West-centered oppressions. And those who pursue labor friendly politics will gain strength.

Finally, soon there will be a court hearing against Halkbank in the USA concerning the violation of the US sanctions regime against Iran. So the relations between Washington and Ankara are extremely tense. Is there a chance that the Turkish economy in its current state will prove to be all too dependent on the American court’s decision?

Turkey is a country, that is independent and that shifts away from the Atlantic and towards Asia day by day.

The United States is not comfortable with Turkey developing its cooperation with its neighbor Iran in many different areas, and especially in trade. And the Halkbank case in the USA is entirely related to this process. The goal is to undermine Ankara-Tehran relations and to intimidate the Turkish state.

The United States is trying to use legal arguments, which are not based on any concrete reason, against Turkey as a weapon.

The Halkbank case is no different from all these illegitimate embargoes and the sanctions that were imposed against our neighbors, Russia and Iran.

Turkey, Russia, and Iran are coming together against such besieging moves of the West, will change the equation. As neighbors, we have to trust each other. Our interests are all coinciding and we all are fighting against the Western imperialism.

All those embargoes, sanctions, political and economic intimidations and the military manipulations will fall into pieces and our region will finally be liberated, when we collaborate and form a solidified bloc.

The published in Russian can be read here:

One response to “Turkey’s political and economical options”