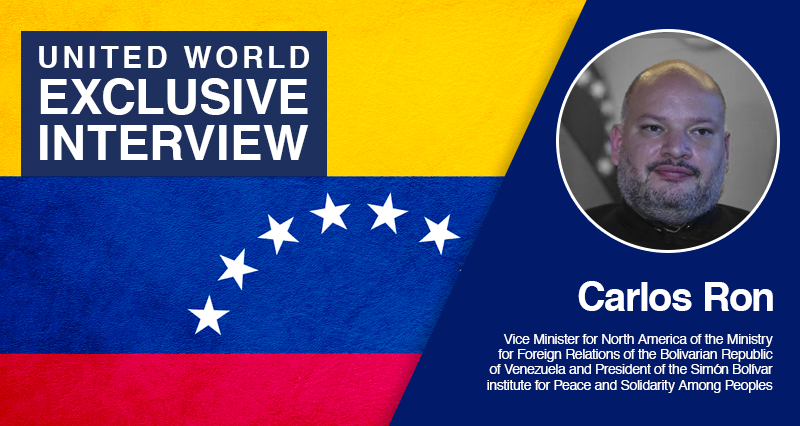 Following the transition from the Trump to the Biden Administration, US-Venezuela relations keep on being on the Latin American agenda. United World International spoke with Carlos Ron, Vice Minister for North America of the Ministry for Foreign Relations of the Bolivarian Republic of Venezuela and President of the Simón Bolívar Institute for Peace and Solidarity Among Peoples, on US-Venezuela relations, Caracas’ international relations, the Bolivarian Republic’s ongoing social reforms and the country’s opposition.

The new US administration, headed by Joe Biden and Kamala Harris, supposedly would bring a different government program to that of Trump; However, the measures that threaten Latin American unity or the bombing of Syria show, once again, the interventionist and warmongering agenda of the United States. In this sense, Venezuela, along with Cuba, China, Russia, Iraq, Iran, Syria and also Turkey, are in the crosshairs of US imperialism: What can we expect for the rest of 2021 from the US against the sovereign governments and peoples that do carry out a pluricentric and multipolar agenda?

Since 1999, when Venezuela took an independent course by beginning to build a participatory and protagonist democracy, which in turn led to an independent foreign policy with the intention of generating new alliances that could cut excessive ties of dependency and pay towards the construction of a regional architecture that would strengthen the group of Latin American and Caribbean countries, we have been experiencing different types of aggressions against our country project. Like all hybrid warfare, this set of aggressions manifests itself in different spheres: political, economic, diplomatic, financial, military and others. It has been a constant process and, until now, there has not been a variation, just different emphases and different styles depending on who is the current official US spokesperson.

“The new US government still has time to rectify its path”

However, Venezuela is a country that believes in peace and diplomacy. Our commitment will always be to the resolution of differences within a framework of respect and international legality. The new US government still has time to rectify its path and promote a respectful dialogue with Venezuela. If, on the contrary, it prefers to follow the wrong path of aggression, Venezuela will always be ready to take the necessary measures to protect its population and the political direction that the Venezuelan people have given themselves through their democratic will.

Venezuela changed US plans for the region

The world has learned through the media from some of the dramatic consequences that the unilateral coercive measures imposed by the United States Government have had on the Venezuelan population. Why does the United States government insist on a scheme that has failed in dictating a President to Venezuela, who would serve the White House?

We could not answer this question for the United States, but the truth is that Venezuela, having an independent national policy and in favor of its own interests, has altered the United States’ plan for a region, which Washington traditionally has considered its natural area of ​​influence. This, in turn, means that the United States does not have control over Venezuela’s important natural resources – oil, gold, coltan, etc., – nor over the way in which Caracas conducts its international relations, in particular with those other States with which that the United States would prefer there were no relationships like China, Russia, Iran and others.

It is evident, based on the historical support that the United States has provided to the Venezuelan opposition, that it aspires a government in Venezuela that they can influence and control as in the past.

How has the constitutionally elected President, Nicolás Maduro, protected the Venezuelan people from the economic-financial blockade of the United States and the European Union? How can the international community contribute to the solution of what has been called ‘the Venezuelan crisis”?

Despite all the difficulties of the blockade and all kinds of attacks that Venezuela has received, the Bolivarian Government’s commitment to maintaining social programs has been unwavering. Just one example: in a country of 30 million inhabitants, 3.5 million social houses have been built to cover the housing deficit in the population. No more has been done, because the ferocity of the blockade has seen the nation’s income significantly decrease, but even so, social investment and attention to the greatest needs of the Venezuelan people have not ceased to be prioritized. The Bolivarian Government also presented tools such as the so-called Anti-Blockade Law, which seeks the use of different legal tools to guarantee income for the country that can continue to be transformed into public policies for the well-being of the population.

The opposition hopes on its friends abroad

In Venezuela, as in any democracy, there are political differences. However, some sectors of the opposition, with the support of the United States and some of its partner countries, have chosen the insurrectionary path to gain power: coups, assassination attempts, calls for the imposition of coercive measures, calls to foreign intervention and so on. All of this has failed simply because it collides with the strong democratic conviction of the Venezuelan people and its institutions. The best contribution that the international community could make is to let Venezuelans make our own decisions within the existing constitutional and democratic framework and stop promoting unconstitutional and violent adventures that try to destabilize the country and produce a change of government by force. Those who boast of being Democrats in that coup opposition have forgotten the need to build a project for the country capable of winning the will of the electorate, and they hope that their allies from abroad will come to do the job that they have not been able to do.

Do you consider that the Venezuela-United States bilateral relationship has begun to tread a path that will lead, in the short or medium term, to the lifting of unjust and illegal sanctions? Or, on the contrary, should we wait for new sanctions against the Venezuelan population and government?

So far there has not been a significant turnaround in US policy toward Venezuela. I believe that we must wait cautiously and continue to reiterate our call for sanity, for diplomacy, for coexistence despite our differences.

Deep solidarity of Venezuela with countries like Cuba, China, Russia, Iran and Turkey

The world is going through a new crisis of capitalism, aggravated by the coronavirus pandemic. Are you surprised that, despite this, the peoples of different parts of the world, and even some governments, have shown their unconditional support for Venezuela?

We are not surprised because Venezuela is a people that believes in solidarity and this has been a fundamental part of its foreign policy. You reap what you sow. Venezuela, now that it is blocked and in the midst of that fierce pandemic, has known what the solidarity of other countries is that have helped us with doctors, medicines, protective equipment and even fuel. Countries such as Cuba, China, Russia, Iran and Turkey have been extremely supportive, but so have multilateral spaces such as the World Health Organization, which reiterates the importance of not only building relations of cooperation and mutual benefit with other countries, but also to bet on international law and multilateralism.

You are the President of the Simón Bolívar Institute for Peace and Solidarity among Peoples (ISB), please, can you tell us a little about this Institute, what its objectives are, what activities it carries out, and its importance in the current political context that the Bolivarian Revolution and the world are experiencing?

The Institute’s main task is to articulate the solidarity of the world towards Venezuela at the same time that it articulates the solidarity of Venezuela with the great causes of the world. Our work focuses on exchange activities where we can make the reality of our country known and learn from other realities. Forums, debates, meetings, courses and publications are part of this work that we have been building in recent months. Our objective, from the values ​​of peace and solidarity, is to expand Venezuela’s relations with the rest of the world. Undertake dialogue and cooperation with different sectors: social movements, institutes, political parties, unions, intellectuals, popular organizations.

President Nicolás Maduro has announced the celebration, within the framework of the commemorations of the Bicentennial of the Battle of Carabobo, on June 24, 2021, the holding of the Bicentennial Congress of the Peoples. Because of your role as Vice Minister of the Venezuelan Foreign Ministry and as President of the ISB, you are one of the most prominent political actors of the “Peoples of the World” Chapter: please, we would like you to invite the Turkish people to participate in this important event in solidarity with the Bolivarian Revolution.

The battle of Carabobo in 1821 marked a new course for the history of Venezuela and even for the history of the entire region. Venezuelan independence became irreversible and it was possible to advance towards definitive independence from the rest of the continent until reaching the battle of Ayacucho, which definitively expelled the Spanish empire. This bicentennial should not only be the memory of that historical feat, but President Maduro is also calling all the popular and progressive forces of the world to meet here in Carabobo and propose a new moment for humanity, where after this terrible pandemic, we can see the course that can be built collectively in order to guarantee health and dignified life for large populations, overcoming the current model that only deepens poverty and generates wars. We must meet to build new solutions that defend humanity. We hope that, from Turkey, a sister nation, we can count on your presence and your contributions that go in this direction.