“Switzerland doesn’t need the US F-35” 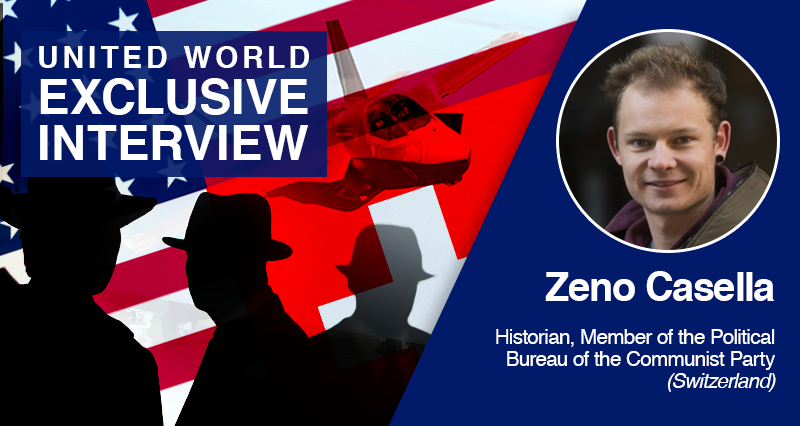 Recently Danish media reported that US agencies had spied on the country’s government institutions in order to facilitate the sell of F-35 stealth fighter planes. The news has sparked a debate in various European countries concerning US intelligence activities and defense cooperation.

United World International spoke to Zeno Casella, historian and Member of the Political Bureau of the Communist Party of Switzerland, on possible US intelligence activities, the purchase of F-35 and Swiss defense policy.

Danish media has reported that the US has spied on Danish government institutions in order to better sell its F-35 planes to the Scandinavian country. Dou you have any indications that the US has intervened similarly into Switzerland, too?

We do not have direct information that can document this kind of espionage, but the Danish case of 2015 suggests that the US could actually be spying on the Swiss government in order to obtain information that could advantage them. The US companies Lockheed and Boeing are actually in the race for the contract to supply the new war aircraft for the Swiss army: the Swiss government therefore should pay more attention to the risk of being spied!

Many experts have incidentally already declared that it is very likely that the US secret services are surveilling the Swiss federal administration in this regard. The Swiss daily newspaper “La Liberté” published that Lockheed has hired Theo Staub, a militia colonel who is a member of the Swiss army general staff, through the consulting firm Proventavia. Staub is Managing Director of this company, and the news has caused a stir. This situation should at least raise some questions: this colonel works both for the client of an important military contract and for one of the companies that is trying to win it. Staub is not the first Swiss officer to be hired by the company, which for several years has also employed Patrick Nyfeler, a high graduate of the Swiss army, who is also director of Lockheed Switzerland. With the excuse that in Switzerland military service is compulsory and every citizen is also a soldier, these serious conflicts of interest are justified.

If so, how do you evaluate this kind of intervention?

The US espionage against European governments is not a novelty: in 2013, the European press revealed that the Obama administration war surveilling most of the EU governments, including its most “loyal allies”, such as Germany or France.

The Danish case of 2015 has therefore not created much sensation, though it is clear that the US government has directly cheated the Scandinavian country. This is a direct expression of the war industry that promotes its imperialist policies for decades. But the fact that the US are now likely to spy on a neutral country such as Switzerland is very problematic: the Swiss government should therefore take a distance from the Atlantic governments and cooperate more with emerging countries like Russia or China.

Comrade Edoardo Cappelletti, Member of the Bureau of the Communist Party of Switzerland declared during a TV debate, that working directly for foreign military manufacturers means compromising the political independence of our armed forces. This unfortunately confirms how the Swiss militia is subservient to Atlantic interests. It is also important to add, as the General Secretary of the Swiss Communists, comrade Massimiliano Ay recalled in an article, that regularly American officers come to Switzerland and control secret locations of our army: the USA sell us their weapons, but they also want to make sure that no buyer country can use them in the future against their strategic interests.

These controls include interventions in the sensitive area of software without any guarantee on the protection of confidential information. The Swiss Federal Government agreed to such controls already when it purchased the old F/A-18 and it will do so again for future aircraft. Only the Swiss Social Democrat MP Bruno Storni – unique even in his Party – had the courage to reiterate this on live television, echoing the theses of the Communist Party, but he was accused of “conspiracy” by a former officer and member of the nationalist Swiss People’s Party.

What is your proposal for a defense and security policy for Switzerland?

Switzerland is a neutral country in the middle of Europe: it is therefore very little threatened by a foreign attack (if it was the case, that would imply that the NATO governments that surround us have not been capable to neutralize this menace… or that they have themselves decided to invade us!). The heavy war aircrafts that will be bought are therefore not necessary, but they are used to demonstrate to the Swiss people that a strong army is still necessary: some light defense planes would be enough, we don’t need the US F-35!

To diversify armaments, Switzerland should consider Chinese and Russian airplanes

It should be added that the former Swiss colonel Roger Schärer has admitted – as the Swiss communists have been warning for a long time – that in particular the F-35 and the Super-Hornet are aircraft that could be deactivated remotely from the country of production in case of emergency.

Concretely, Switzerland should in full independence decide to act against the interests of an Atlantic power, the planes could no longer be operative. Moreover, the Swiss government, in its message to the parliament explicitly said, that he has only taken in account NATO aircrafts that would make us technologically dependent from (and submitted to) the USA: if we want to defend our neutrality, we should consider also non-NATO airplanes (such as Russians or Chinese models): it is necessary in fact to diversify the technological constraints and armaments.