New US military base in Northeast Syria 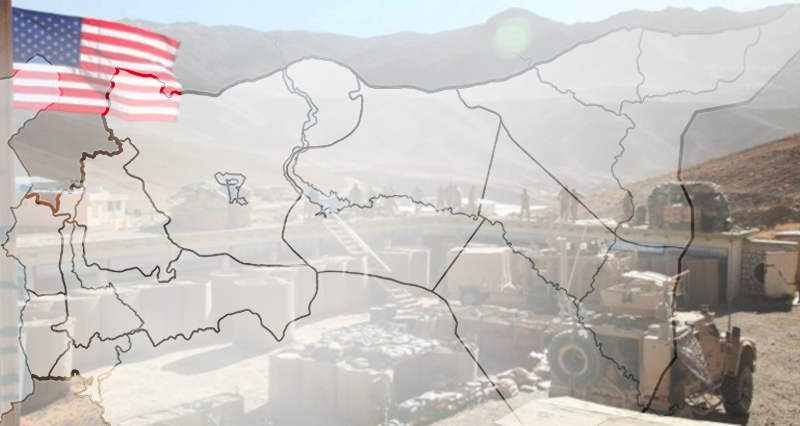 The US has started constructing a new military base in the Northeast of Syria. The base is located in the town of Ain Diwar, right across to the Turkish town of Cizre and also close to the Iraqi-Syrian border.

The US forces have deployed military reinforcements including 60 armored vehicles and army-engineering vehicles to carry out excavation, leveling, and construction of barricades in the are, reports the Syrian news agency SANA.

Turkish media reported that more than 80 intelligence personnel is already deployed to the base, which is located at critical juncture of Turkey, Iraq and Syria.

Speaking to Arab News, Nicholas Heras, director of government relations at the Washington-based Institute for the Study of War, said the location of a new base at Ain Dewar was a logical move if the US intended to have a long-term presence in northeast Syria.

“The base would be located near the most important entry point into northeast Syria from the Kurdistan Region of Iraq, which is where most of the ground lines of resupply and reinforcement for the counter-Daesh campaign enter Syria,” he said.

The Turkish newspaper Aydınlık interviewed local sources and Turkish security personnel that have done duty in the region. The base serves to connect and coordinate the PKK-entity in the north of Iraq with the PYD-region in Syria, the sources told. Its long-term target is considered to unite these two regions.

Sources told the newspaper that the bases consisted nearly only of intelligence personnel, who was formerly “using buildings that belonged to the Ciburi Tribe. As the personnel’s number rose, they started using containers. Some of these served as offices, some for accommodation. A rise in activity was observed following the Biden Administration’s establishment. Trucks have carried construction material. Local sources report that new buildings are going to be constructed and the base turned into a modern, permanent one. Including highest security standards.”

Local sources confirmed that the US has enlisted several people from the Ciburi Tribe as soldiers, putting them on payroll and deploying them to the base.

Retired security forces that have served in the area before have confirmed to the Turkish daily newspaper Aydınlık the base and its enlargement:

“There is a US intelligence structure in this area since a long time. We have received news in the last days that they have raised the number of personnel significantly, to 80. If you add security personnel and local workers, that the number of the base personnel is even higher. This base is becoming a critical command post for the whole region. Pipelines pass through this area. The oil pipeline Kirkuk-Yumurtalık passes very close by. Another issue is the Russians. The Russian activity in the area has accelerated, and the US is very disturbed. They are making moves to block the Russians. It seems this is one of the factor that lead to the enlargement of the Ain Diwar base.”

“Base enlargement indication of coming fighting”

Another expert with great experience and knowledge on the specific area explained:

“Ain Diwar is an important and strategic location for various reasons. The base controls the line between Syria and Iraq. If for instance Turkey considers to intervene into the east of Euphrates, crossing the border to Iraq, then this area becomes crucial to impede Turkey’s moves. The US can deploy thousands of soldiers to the base in a short time on the prejudice of protecting it. In such a case, its goal will not to protect intelligence personnel but to impede Turkey’s actions.

The same goes for the Russians. Russia has recently been very active in the countryside of Al Hasakah, Deir Ez Zor and Raqqa. Russia and Syria do not stand on the side while the US is intensifying its activities. The local tribes act according to the balance of power. Some of them might still play both sides, but in the end, the balance has shifted since last year. The Russian-Syrian-Iranian axis is much stronger now. Additionally, Turkey has intensified its activities in the area.

The US has attacked Iranian forces from the air recently. This attack was actually a warning against military operations towards the East of Euphrates. The US has become more active in the area following the establishment of the Biden Administration, but the status quo in the area cannot last long.

The Syrian government is decided to get the oil fields back, and the US occupation of them violates international law. No one in the world supports that occupation. The enlargement of the base in Ain Diwar is an indication that fighting will soon erupt in the East of the Euphrates.”

2 responses to “New US military base in Northeast Syria”