Visit of the Pope to Iraq: Sequel of the ‘Moderate Islam’ Project 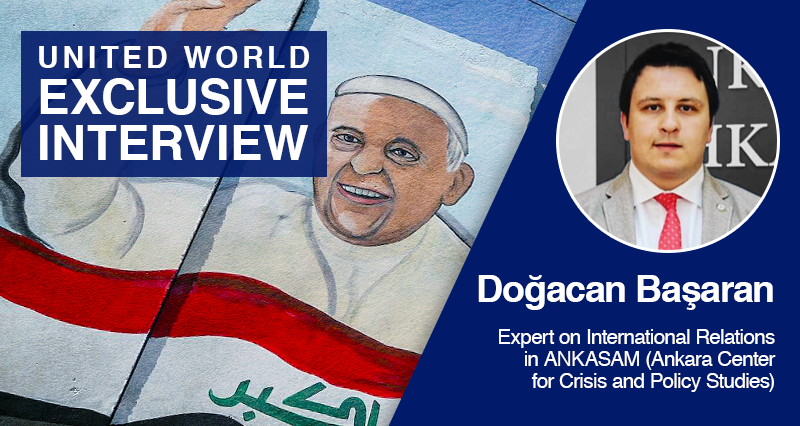 Doğacan Başaran, ANKASAM expert, evaluated the visit of the Pope to United World International. Stating that the Vatican is trying to enforce the “Moderate Islam” project of the West on the states of the region under the “Interfaith Dialogue” discourse, Başaran drew attention to the goals of the Biden administration in the region.

The Catholics’ religious leader Pope Francis’s visit to Iraq ends today. During his 3-day visit, the Pope met with Prime Minister Mustafa Al-Kadhimi and President Barham Salih in Baghdad, Ayatollah Sayyid Ali al-Husayni al-Sistani in Najaf, President of the Kurdistan Regional Government (KRG) Nechirvan Barzani and Prime Minister Masrour Barzani in Erbil. The Pope also prayed for those who lost their lives in terrorist attacks at the al-Tahira Church in Mosul, which was destroyed by the terrorist organization ISIS in 2014. Visiting the Karakus (Hamdaniye) district, which is known as the capital of Christians, the Pope also went to the ancient city of Ur in Nasiriye, believed to be the birthplace of the Prophet Abraham. Apart from his contacts with official authorities, the Pope also met with Christians and Yazidis, and held meetings with non-governmental organizations and various diplomats.

Although the Pope’s talks with various sectarian groups in Iraq were announced as “Interfaith Dialogue”, these visits reveal the division and fragmentation of Iraq once more, experts stated.

The timing of the Pope’s visit to Iraq, first time in history, is also eye-catching. In fact, thousands of additional security personnel were dispatched to protect the Pope. The Pope’s visit occurred in a time when several missile attacks against US bases in Iraq and suicide bombing attacks in various regions of the country took place. International press on the other debated hotly on the visit in times of the pandemic.

The Pope delivered during his visit remarks on Iraq within the regional context, and his travel to the country is widely discussed in the context of Iraqi politics and regional developments. The Pope had stated in his first day speech that he considered the visit an important duty, because Iraq had been suffering greatly for years. “It is necessary to stand against regional tensions that put Iraq at risk. The international community has a duty for the development and peace of Iraq”, the Pope added, commenting on regional politics.

Iraqi officials said they welcomed the visit, as it provided an opportunity to demonstrate ‘relative’ stability amid war and sectarian conflicts. On the other hand, some Shia groups opposed Pope Francis’s visit, describing it Western interference in Iraq’s internal affairs.

Doğacan Başaran, International Relations expert from ANKASAM (Ankara Center for Crisis and Policy Research), answered our questions regarding the Pope’s visit to Iraq and its possible consequences.

The truth behind the ‘interreligious dialogue’

What does the Pope’s visit to Iraq mean? Why do you think has the Pope insisted on this visit, when the already dangerous conditions worsened with missile attacks on US bases, new suicide attacks and the pandemic?

As it is known, the Vatican follows the mission to gain prestige by developing close relations with various Muslim figures through the discourse of the ‘interreligious dialogue’, create the image of tolerance, and actually impose the Western project of ‘moderate Islam’ on the countries of the region via various actors. They have used Fethullah Terrorist Organization (FETO) for this purpose during many years. FETO has lost its power to fulfill this mission after the coup d’état of July 15. However, the Pope met with El-Ehzer Sheikh Ahmet-et Tayyib and now Ayatollah Ali es-Sistani, maybe considering implementing an updated version, a “Moderate Islam 2.0”. In this context, the Pope’s insistence on visiting Iraq in spite of the COVID-19 pandemic is striking. The visit took place at a time when Shia militia groups known for their closeness to Iran carried out attacks on American bases. This is also another issue worth to consider. In a sense, the Pope’s meeting with the Shia imitation of the Vatican, Sistani, can be interpreted as the West’s effort to pronounce and deepen the differences between Iraqi-based Shiism and Iran-based Shiism, using the difference between the Qom and Najaf schools of theology. As a matter of fact, the recent Parliamentary Elections in Iraq and the burning of the Iranian consulate in Basra by Shia protesters show that the difference between schools of Shiism is effective in among a certain part of the Iraqi Shiites, and that Shia thought developed on the ground of Iraqi nationalism feels discomfort about Iran’s regional presence.

Visit as a message to Iran

While the Iraqi government evaluates the Pope’s visit positively, the Iranian side takes a more suspicious stance. And the meeting with Sistani was a main event during the visit. Can the visit be evaluated as a message to Iran in this context?

Prime Minister Mustafa Al-Kadhimi was pleased with the visit and declared March 6 the “Day of Tolerance”. The Pope has also met with representatives of the Iraqi Kurdistan Regional Government, who are known for their Sunni identity. That means that talks have been arranged with actors whom the US may prefer as partners and who are far away from Iranian influence. Therefore, this visit caused disturbance in Tehran. In particular, bringing the Najaf-based Shiism to the forefront against Qom and the distancing Iraqi Shiites from Iran may result in Iran seriously losing of influence in the Iraqi politics in the medium and long term. For this reason, the Pope’s visit to Iraq has the quality of being a message to Iran.

The continuation of the Abraham Accords

What are the repercussions of the Pope’s visit to the region?

It is possible to evaluate the Pope’s visit with the Abraham Accords signed in the era of Donald Trump. The fact is, the Pope visited Ur where it is believed that Prophet Abraham was born. Both the Pope’s different meetings in Iraq and the Abraham Accords seem to serve the same purpose. The aim is to establish the order desired by the West in the Middle East and to get different the actors in line with it. In this sense, it is not a coincidence that Iran was suspicious about both the Abraham Accords and the Pope’s Iraq visit. Therefore, the visit’s main message is the will to limit Iranian influence in Iraq. At this point, it is obvious that the Najaf School will be supported and elevated in public presence. It is possible that the situation also has repercussions on Shia beyond Iraqi territory. Moreover, the number of Muslim countries that decide to normalize with Israel will probably increase.

Turkey must strengthen relationship with Baghdad

The military operations Turkey launched and will launch aim to struggle against terrorism. Therefore, Ankara supports Iraq’s territorial integrity. This was the message delivered by the Minister of National Defense Hulusi Akar during his visits to the region. Ergo, both Baghdad and Erbil are not so uncomfortable because of Turkey’s military operations. However, it is worth to remember Turkey’s military operations in Iraq caused serious problems and reactions on Iraqi side during the government of Prime Minister Nuri Al Maliki. Maliki was a politician famous for his closeness with Iran, but a long time has passed since. Current Prime Minister Al-Kadhimi appears to try to implement a multi-dimensional foreign policy and maintain close relations with Turkey. Frankly, I do not think this situation will change in the short term. On the other hand, it is clear that the West is implementing containment strategy towards Turkey. For this reason, it is essential for Turkish decision makers to keep their relations with Baghdad and Erbil at a positive level.

Background of the visit

The Vatican had announced as the visit’s main topic to encourage Christians still living in the region to stay, and to call those who had left before to remote regions such as Lebanon, Jordan, Canada and Australia to return. In the documents and declarations the Vatican has distributed before the visit, Iraq was called “the land of Abraham, father of all three monotheistic religions”.

The visit is also considered to provide moral support for Christians in the Middle East, in particular for the Christian population in Iraq, whose numbers have declined since 2003.

The Christian population in Iraq has decreased from 1-1.4 million to 300-400 thousand since the US invasion in 2003, according to data BBC cited from the foundations of the Catholic Church, even though exact numbers are not known.

84-year-old Pope Francis canceled his official visits in 2020 due to the new type of coronavirus outbreak. Francis made his first foreign trip after 16 months, becoming the first Pope in history to visit Iraq. Before Pope Francis, Christian leaders Jean Paul II and Benedict XVI always wanted to visit Iraq, where the oldest Christian community lived, but could not do so due to circumstances of war and conflict.