Are Russian Communists in the same boat as Putin? 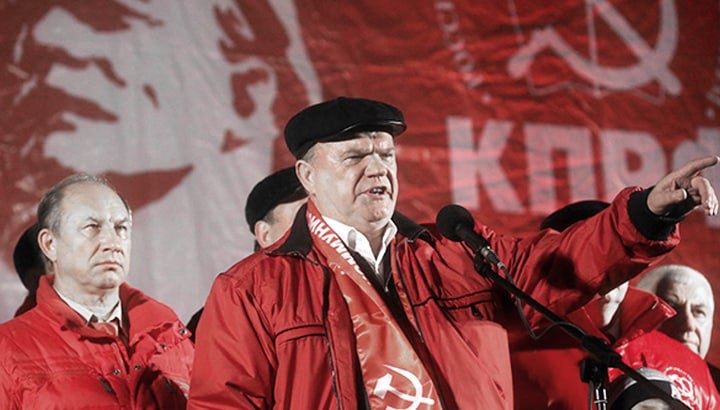 The Communist Party of the Russian Federation (CPRF) has been the main oppositional party since the dissolution of the Soviet Union. When Boris Yeltsin was governing Russia, fully capitulating to the West and executing liberal policies that caused great damage to the country, the CPRF was fighting openly and fiercely against the government. The CPRF was taking an antagonistic stance to the Yeltsin Government.

The party maintained its position as main opposition, but today it takes a different political stance than in the times of Yeltsin. The CPRF today supports the Kremlin’s determined resistance against threats from the West and clearly rejects Western interference to destabilize the government. Western actions that might be interpreted as support for the opposition are also clearly and openly rejected.

The CPRF and its leader Gennady Zyuganov had also supported the exterritorial military actions and presence of the Russian military, beginning with the intervention in Syria and stood on the side of Putin in the Crimea Question.

After Biden has taken over the US government, Zyuganov pronounces this policy even more. The threats from the Atlantic and Russia’s national interests have led the CPRF-leader to cooperate with the government.

Maximum support for Putin’s steps against the US

This policy was recently on display in a videoconference that the Russian President Putin held with leaders of the party represented in the Duma. In the conference, the CPRF leader prioritized the US threats over domestic political competition, pointed out the danger Biden poses and declared his party’s maximum support for the Kremlin’s strategic initiative to protect the national sovereignty. Biden had declared Russia enemy No. 1, according to Zyuganov.

In his speech, Zyuganov also warned to be prepared against acts of sabotage with the purpose of propaganda and added, “the external pressure on Russia will mount up, therefore we need to provide social solidarity domestically”.

“Elections should serve not to divide, but to unite the society”

The CPRF-leader summarized the results of the videoconference to the press, too. In his declaration he mentioned the importance of Russia’s international reputation and added that the country was facing a war not only led from the outside but also from within the Russia itself. Referring to the protests around Navalny, Zyuganov stated that protests on the streets of Moscow aimed to confuse and destabilize Russia.

The communist leader mentioned that the Russian community abroad was also under attack and measures to its protection urgently needed. Additionally, the Duma elections coming up in autumn should serve not divide but to unite the society.

The communist leader had pointed to two different approaches in Russia already in the beginning of the poisoning of Navalny: the statist-patriotic approach and the liberal-oligarchic approach of Navalny’s supporters. Zyuganov had characterized Navalny then as “the young and sober Yeltsin”.

The position against the Western “Navalny Project”

Zyuganov continued to take this position after the establishment of the Biden Administration, its declarations that declared Russia to be enemy No. 1 and directly attacked Putin. In a speech that he held on February 19th in the Duma, Zyuganov refrained to even mention the name of Navalny and declared that this person was a US puppet, and used at least by four different foreign intelligence agencies.

In press declarations, Zyuganov labeled Navalny “a traitor who returned to set fire on the country” and called the government to take any necessary precautions and measures against this. He commented on those who participated in the protest actions in favor of Navalny as “only confused people follow a traitor”. Zyuganov compared the fact that minors were taken to the protests with Nazis pushing women and children over a minefield.

The Russian politician emphasized Biden’s role in the events and pointed out that the West never liked the Russian Empire, the Soviet Union or the Russian Federation.

In a party meeting in January, Zyuganov also had stated that the West started a new crusade against Russia using Navalny.

“The supporters of Navalny within the party should be expelled”

Zyuganov’s line on Navalny was also reflected in the CPRF party discipline. The CPRF First Secretary of the Moscow District, Valery Rashkin had made statements supporting Navalny, and Zyuganov threatened to expel him from the party, pronouncing that one could not turn Navalny into a hero, because he was a traitor. Those who did not understand this fact were to be expelled from the party, according to Zyuganov. The communist leader emphasized the liberal revanchist line, which wanted to repeat the events of the 1990s, could not be permitted and that everyone had to abide to the party line.

Zyuganov had also declared his support for the Belarus’ President Alexandr Lukashenko during the protests in that country.

Biden could not “establish owned opposition”

The CPRF leader maintained a line that kept criticism against his own government aside, favored to support the Kremlin against US threats, thus maintained the national and domestic front stable and impeded domestic destabilization attempts. In response to this, President Putin followed the approach to unite the political forces and the society, one has to note.

For instance, Putin appointed the CPRF Central Committee Presidium Member Andrei Klichkov as Governor of the Orlov Region. Putin also maintained during the pandemic governance in cooperation with the opposition parties. Under these circumstances, the White House could not establish an “owned opposition”, and the Navalny protests faded away in a short time.