Palestine: The country that can change the geopolitics of Eastern Mediterranean fundamentally 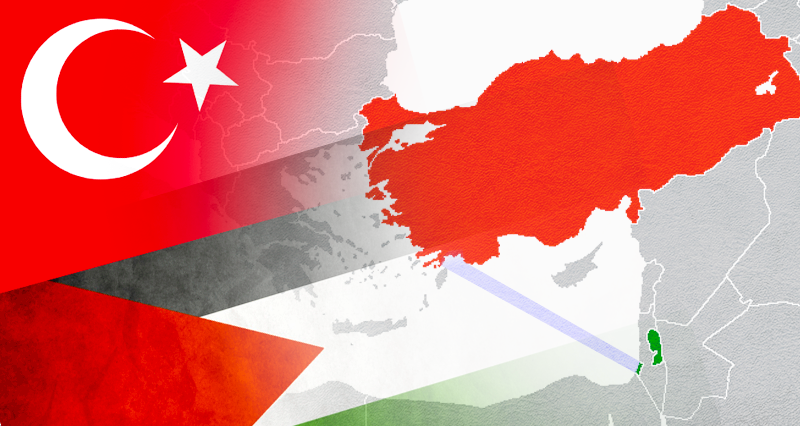 Although its territories have been occupied by Israel for years, Palestine is a country that can change the geopolitics of the Eastern Mediterranean fundamentally due to its part of the Gaza Strip. Palestine touches the Mediterranean with its 40 kilometers long coastline and calls the attention with the rich gas reserves located on its offshore. But there are important obstacles that hinder Palestine of becoming a part of the Eastern Mediterranean equation, starting with its status at the UN as non-member observer state. The UN Secretariat cannot register any agreement a country signs with Palestine, because the country is not a “member state”.

In contrast, if Turkey and Palestine sign an agreement on the borders of mutual Exclusive Economic Zones (EEZ), this would change the whole equation in the Eastern Mediterranean. First of al, such an agreement would state another example of and thus confirm the methodology used in the Turkish-Libyan agreement. The border delimitation would be made by using geodesy projections instead of Mercator projections. In consequence, Palestine would gain rights on a small portion of the Block No 7 and on parts of the blocks 11 and 12, all currently occupied by the Southern Cyprus Greek Authority, thus in sum obtaining more than 10.200 km2 of maritime space. Additionally, this agreement will nullify for once and all the previous Greek-Southern Cyprus-Delimitation.

But a gas agreement with Palestine bears problems in the short term, because the country is not a “full member” of the UN and its Gaza Strip is under embargo. Ret. Admiral Cihat Yaycı, architect of the Turkish-Libyan agreement, proposes to sign first an agreement between Turkey and Israel in order to secure the rights of Palestine. According to Yaycı’s calculations, Turkey gains with this agreement 10.462 km2 and Israel 16.344 km2 of EEZ. Moreover, Israel will have full and exclusive ownership on the block 12, where the Aphrodite field with an estimated gas reserve of 125 billion m3 was discovered, and rights on certain parts of the blocks 1, 7, 8, 9, 10 and 11. Such an agreement will secure Palestine’s rights and strengthen the legal status of the Turkish-Libyan agreement.

A possible agreement between Turkey and Palestine was welcomed by positive messages from the latter. Dr. Basem Naim, former Minister of Health and currently Hamas’ Member of International Relations Office, spoke in a recent interview to Onur Sinan Güzaltan from United World International. Naim said:

“We are looking for any cooperation or support with the countries of the region and firstly from Turkey to get our rights in gas and other resources and to achieve our independence and sovereignty materially. Hamas appreciates the strong commitment of Turkey in general, its public, its president, and its government, to the Palestinian cause. We are encouraging any steps of unity or cooperation. We are ready to help.”

The ambassador of Palestine to Turkey, Faed Mustafa delivered a similar message in his interview to Turkish daily newspaper Aydınlık:

“As Palestine we deem great importance to our relations with Turkey. We work hard to deepen relations on all levels. And we are open to any proposals to that purpose. This includes an agreement on the Exclusive Economic Zone as well. We also have rights in the Mediterranean. Palestine has its rights on the oil and gas in the Eastern Mediterranean too. We are ready to agree with Turkey on the issue of gas. And we are ready to work together. We want to develop and deepen relations on all levels.”

Palestine seems to be ready to an agreement with Turkey, the country that was one of its most important supporters on international level. Actually, Israel also debates actively the Turkish theses and the blocks Southern Cyprus has seized from Tel Aviv. Israel sends messages that Turkey should be part of the East Med Gas Forum, which show the possibility that at least talks on technical issues between the two countries may begin soon. But conditions for normalization between Israel and Turkey are not ready yet, as Israel’s precondition that Turkey should stop supporting Hamas, its insistence on inhuman treatment of Palestinians and the embargo imposed on Gaza demonstrate. MOSSAD Director Yossi Kohen’s declarations, that they consider Turkey a bigger threat than Iran indicate much deeper contradictions between Ankara and Tel Aviv than EEZ delimitations.

Turkey has not recognized the importance of the seas and the EEZ very well in the past. Lacking know-how and experience and different national priorities have led the country to consider only vertical delimitations and consequently a narrow approach on EEZ.

Today on the contrary, Turkey can sign EEZ border delimitation agreements with Libya, Turkish Republic of Northern Cyprus as well as Palestine, as the country is neighboring these via shared coastal lines. This is possible both geographically and judicially. The according principles and judgments of international maritime law, international court orders and arbitration tribunal decisions support such an approach. If Turkey signs an agreement with Palestine on similar terms and conditions as it did with Libya, than the activities of Greece and Southern Cyprus in the Eastern Mediterranean against Ankara and their illegal demands will be stopped. A possible EEZ delimitations agreement will determine the eastern limits of Turkey’s EEZ, and provide important gains to Palestine. There are of course difficulties and obstacles on that road. But these difficulties can be solved hand in hand.